(Minghui.org) Today's news from China includes incidents of persecution that took place in 17 cities or counties in 11 provinces, where at least 30 practitioners were recently persecuted for their belief. 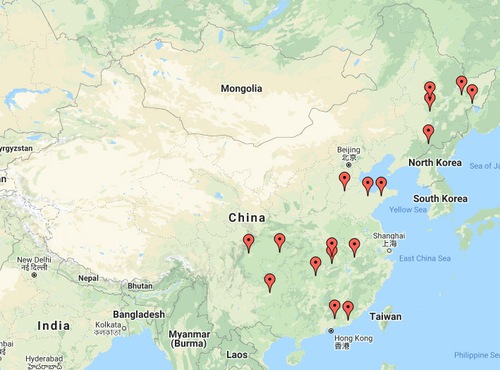 Ms. Liu Chunjing was tried via video link by the Xiangyang District Court in Jiamusi City on December 8, 2020. Her lawyer refuted the prosecutor’s allegations one by one and defended Ms. Liu’s innocence with well-presented facts.

The court issued a verdict in mid-January 2021 and sentenced Ms. Liu to four years in prison.

Ms. Liu immediately appealed and entrusted her lawyer to mail the appeal and associated legal documents to the Jiamusi Intermediate Court.

Ms. Shu Yulan and Ms. Shu Yulian were arrested by officers from the Dananmen Police Station on May 2, 2020, for talking to people about Falun Gong. Their cases were turned over to the Taihu County Procuratorate in November. The county procuratorate filed charges against the two practitioners with the Taihu County Court.

Mr. Zhang Liyun was arrested by village head Liu Jingwei of Risheng Village, Qingshan Township, around 10 p.m. on January 26, 2021. Mr. Zhang remains in custody, but it is not clear where she is being held.

Mr. Lei Guoting was pressured by officials of the Baiyun District Political and Legal Affairs Committee and his work unit in January 2021 to sign three statements renouncing Falun Gong. He refused to cooperate and has become displaced.

Due to the pandemic lockdown, there were no female wards in the Kaijiang County Detention Center. The police had to place them under detention at their own homes.

Ms. Liu was called for interrogation by deputy head Li Xiang of the Kaijiang County Domestic Security Division on December 3. She was released on bail at 7 p.m.

On December 16, deputy head Li notified Ms. Liu that her case was turned over to the Kaijiang County Procuratorate.

At 9 a.m. on February 2, 2021, Ms. Liu was notified to go to the procuratorate. Deputy head Li and other officers went to her home at around 9 a.m. the following day and arrested her. Ms. Liu’s family was notified after 2 p.m. that she had been officially placed under arrest.

Ms. Wang Yanjuan was sentenced to a three-year-and-one-month prison term in the second half of 2020. She was released because of serious physical problems as a result of abuse.

Ms. Wang was arrested by officers from the Chengxi Police Station in Jiedong District on the evening of December 18, 2019, for talking to people about Falun Gong. The officers took her to the Jiedong District Detention Center, where she had been held in custody.

Ms. Li Xiuzhen, Mr. Qiao Renxi, Ms. Gao Xiuying, Wang Fachen (gender unknown), and Mr. Wang Xiyao from Jiangyuan District were arrested and taken to a brainwashing center in the Heigou Detention Center on January 8, 2021, where they were pressured to give up their belief.

They were detained between five and fifteen days before being released separately.

Mr. Luo Guobing, 69, from Laohekou Village, Heba Town, Datonghu District, was arrested at home and his home ransacked by officers from the Heba Police Station on the evening of February 4, 2021. He is being held in the Nan County Detention Center.

Mr. Zhang Mingzhou from Tailiu Village, Wenjia Town, was arrested by officers from the local police station and the Domestic Security Division on January 2, 2021.

He was released 24 hours later.

Practitioner Chen Quanrong (gender unknown) was arrested at home by several officers from the Mishan Domestic Security Division and the No. 4 Police Station on December 18, 2020. The officers ransacked Chen’s home.

Chen was taken to the Jixi Detention Center the following evening. Chen was interrogated by the Mishan City Procuratorate and subsequently released on bail on January 22 after Chen’s family paid 10,000 yuan.

Nanshan Community personnel and police officers broke into Ms. Zi Silan’s home in recent days. They pressured her to give up her belief. Ms. Zi made it clear to them that she would continue practicing Falun Dafa. They tried to confiscate her Falun Dafa books, but Ms. Zi’s daughter stopped them.

Mr. Shen Shihua and Mr. Wang Chengdong from Bao’an Village, Qingding Township, were arrested by Yushu City Domestic Security officers on December 29 and 30, 2020, respectively. They were caught on video surveillance cameras while distributing Falun Gong materials. They were held in the local detention center.

Officers coaxed and deceived the two practitioners during interrogation. They told them if they admitted that they had distributed the materials and would sign guarantee statements renouncing Falun Gong, they would be released. The two practitioners signed the statements, yet the police did not release them.

Police station officers broke into Ms. Yin Xianju’s home and arrested her on February 1, 2021. She was given a blood test. The officers made voice and video recordings and collected fingerprints from her. She refused to sign the paperwork. Later her son signed for her. She was released after midnight.

The officers also ransacked Ms. Yin’s home and confiscated photos of the founder of Falun Dafa, DVDs, and printed materials.

Director Guo Feifei, deputy director Li Mingda, and three other officers from the Jianguo Town Police Station broke into the homes of Ms. Li Fengling and Ms. Wang Baoqin and ransacked the places on February 1, 2021. They confiscated photos of the founder of Falun Gong, Falun Dafa books, and other personal belongings.

Ms. Wang Suoxian and Ms. Dai Juzhen from Dongxihu District were reported to the police while talking to people about Falun Gong at the Dashichang Market on January 12, 2021. They were arrested by officers from the Dashichang Police Station. Ms. Wang had a blood sample forcibly taken and was later released. Ms. Dai was released for health reasons.

Mr. Cui Xuelei from Yichun City was questioned, searched, and photographed by police officers at the Harbin Railway Station while he was waiting to board a train on February 7, 2021.

Officers from the Chengxi Police Station and deputy Party secretary Jiang Wanna of the Zhumenting Residential Committee went to 70-year-old Ms. Huang Xiulian’s home in December 2020. They pressured her to sign the three statements to renounce Falun Gong, but she refused.

Mr. Wu Jiajian from Taiguang Residential Community in Jiangshan Town, Laixi City, Shandong Province was arrested at home by the Luoyang City police in Henan Province led by officers from Liquanzhuang Police Station in Jiangshan Town on November 7, 2020. He is being held in the Luoyang Detention Center.

“My Trials Over Chinese New Year”