(Minghui.org) There is a book that is read by millions of people worldwide. What makes this book so special? Teacher Ms. Lin Lei reflected on her story and explained how this special book changed her life. 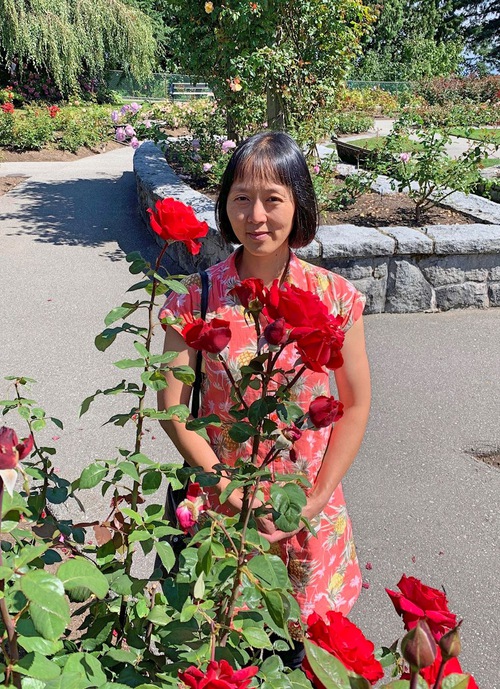 Ms. Lin was talented since childhood. She won third place in dance and singing competitions at national levels. She was also involved in multiple sports. Ms. Lin was class valedictorian at her high school graduation. She attended art school and became a music teacher.

Ten years ago, Ms. Lin immigrated to Canada with her family. Since she had two small children to care for, she decided to open a daycare in her home.

Ms. Lin’s friend recommended Falun Dafa to her. Her friend used to suffer from depression but recovered after practicing.

At first, Ms. Lin did not think much of the practice, but she suddenly remembered it a month later. She went on the Minghui website which contained Falun Dafa literature and an exercise demonstration video. The exercises were easy to learn, so Ms. Lin decided to practice.

The Goodness of Falun Dafa

Ms. Lin had back pain from her dancing days, and her pregnancies made the pain worse. Sometimes her neck and back were so stiff that she could barely move. She also had migraine headaches. All of these symptoms went away after Ms. Lin began practicing Falun Dafa.

Her practitioner friend explained that reading the teachings are a major component of the practice, so Ms. Lin read Zhuan Falun by Mr. Li Hongzhi, Falun Dafa's founder.

When she first read Zhuan Falun, Ms. Lin thought the book was good. However, she could not understand some of the deeper meanings, for example, what is “purifying the body”? (Lecture One, Zhuan Falun)

A week after she started practicing Falun Dafa, Ms. Lin developed a bad cough. The phlegm she coughed up looked like wads of cotton. The strange thing was that she only coughed at night, not during the day when she had to work. Her body felt light after the cough went away. She had some discomfort during the purification process of her body. When it was all over, she was healthier than before. She knew first hand the goodness of Falun Dafa. 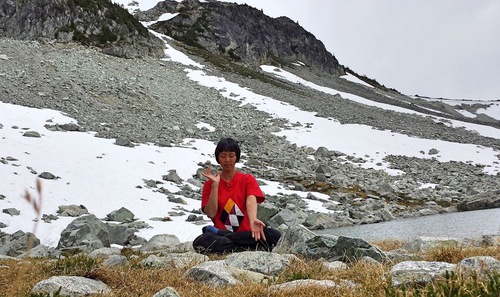 Ms. Lin does the fifth exercise, the sitting meditation.

Before she began practicing Falun Dafa, Ms. Lin thought she was a good person. Her friends and family also thought highly of her.

From reading Zhuan Falun Ms. Lin learned what it meant to be an even better person, one who is completely selfless. For example, Ms. Lin self-reflects whenever conflicts arise. She focuses on her own shortcomings instead of other people's imperfections.

Ms. Lin admitted that in the beginning, she was not sure how to look within—until one day, she and her husband got into an argument. Neither would back down. Afterward, Ms. Lin suddenly realized that looking within means examining herself for her own shortcomings. Ms. Lin thought about how she had been focusing on herself recently and neglected her husband.

Ms. Lin said, “Master asks us to be someone who thinks of others and to become selfless. I should have been more considerate and understanding of my husband.

“For example, I used to only worry about what the children would like to eat when I went to the supermarket. I gradually changed. I also thought about what my husband would like to eat. Now, I buy food that everyone likes to eat...I set aside time to talk to him and ask about his work.”

Their previous grudges and misunderstandings were resolved.

Ms. Lin’s husband admires her, but he is not confident whether or not he can meet the expectations in the book Zhuan Falun, so he has not yet started practicing. If he hears anyone making negative comments (Chinese people affected by the communist regime’s propaganda), he tells them that Falun Dafa is good.

Ms. Lin’s cultivation influenced her children as well. Her younger child reads Zhuan Falun with other young practitioners on the Internet every day. He conducts himself according to the teachings in Zhuan Falun.

He avoids confrontations in school. He does not get upset when other students make fun of him. One time a friend ran into him. Although he was in pain, he did not complain because he knew his friend did not deliberately hurt him. He said, “Because I practice Falun Dafa I know what I can and cannot do.”

“Zhen-Shan-Ren is the Sole Criterion to Discern Good and Bad People” ((Lecture One, Zhuan Falun)

Zhen-Shan-Ren (Truthfulness-Compassion-Forbearance) are the guiding principles by which Ms. Lin lives her life. Her kindness and generosity not only positively impacted her family members but also changed people who used to be prejudiced against Falun Dafa. Ms. Lin's neighbor moved from the U.S. and was surprised to learn that Ms. Lin practiced Falun Dafa.

As the two families interacted, they became friends. One day the neighbor told Ms. Lin, “I used to have some negative thoughts about Falun Dafa...but after seeing how you act and treat others, my opinion changed.”

Ms. Lin cares about her students' futures and applies the principles of Truthfulness-Compassion-Forbearance in her work.

Besides her preschool curricula such as crafts, drawing, and basic math to prepare the children for elementary school, Ms. Lin pays attention to their behavior and social skills.

For example, some children like to run around at mealtime. Ms. Lin teaches them proper table manners: rest your feet on the floor, move your chair close to the table or food might drop on your lap or on the floor. We should not waste food, and only take what we can finish. Ms. Lin encourages the students to hug their parents at the drop-off and wave good-bye to their teacher and friends at pick up.

She said, “I teach the children with compassion. I don’t force rules on the children. I kindly explain what they can and cannot do, and right from wrong.”

Ms. Lin shares messages of compassion at storytime. Her interpretation of childhood stories changed after Ms. Lin became a Falun Dafa practitioner, as she found deeper meanings in them.

She said, “Take ‘Goldilocks and the Three Bears’ for example. Most readers see the story as a way to teach children the concept of large, medium, and small...different sized bears, beds, and bowls. After I began practicing and read this book again, my interpretation changed. I analyzed the story with the children...Should the little girl enter the house without permission? ‘No’ the children would say. Is it okay to eat other people’s food without asking? ‘No’ the children said. The little girl touched the bears’ food, she also ate all of baby bear’s porridge. Now what? ‘The little bear has nothing to eat, he will be hungry,’ the children said.”

Through storytime the children learn proper behavior. They also learn the concept of compassion.

Ms. Lin said that a good movie can show us the proper way to solve problems and get along with others. However, many children only learn how to fight and compete with others from watching TV programs and movies. Some students brought this behavior to the daycare. She explains that this kind of behavior is not allowed at her school.

Falun Dafa talked about the relationship between loss and gain. Ms. Lin incorporated this concept into her teaching as well. She tells her students that when a person says hurtful words or hits another person, a piece of beautiful white material will leave his body and land on the person he hit. The white material from our body is precious. Then why did the person who got hurt receive it? It is because he suffered, he was in pain and he did not hit back. Her students usually say “I want white material, not black material (karma)” when there is a disagreement among them.

Sometimes her students tell Ms. Lin that their parents argue at home. Ms. Lin tells the students, “Maybe you can tell them not to get upset, and that they should be tolerant.

She said, “Falun Dafa teaches us compassion, compassion is powerful...only compassion can improve the situation—retaliation will not,” said Ms. Lin.

Under Ms. Lin’s guidance, students learned how to solve problems with kindness.

Once an older student wanted to play with two younger girls, but the girls did not want to play with her. The older girl was upset and asked Ms. Lin for help.

Ms. Lin said, “You are moving up to kindergarten soon, what will you do if this happens again?”

The girl thought about it and told the two younger girls, “I really want to play with you, let’s play a game.” The two girls still refused to play with her. Refusing to give up, the older girl brought books to the younger two and tried to teach them drawing. Eventually the three girls played happily together.

Ms. Lin praised the older girl and said, “You are great!” Ms. Lin told the girl’s mother about it, “Your daughter resolved a difficult situation on her own...she should have no problem in kindergarten.”

The children love Ms. Lin. They are on their best behavior in her school. One family said that Ms. Lin transformed their usually mischievous child into a friendly child who loves to learn. They are happy that Ms. Lin is their child’s teacher.

“The children in her school are so well behaved! They talk nicely and don’t hit each other,” one parent commented. “My child is so naughty at home, I don’t know what to do with him anymore,” another parent said.

Ms. Lin told them the children changed because of Falun Dafa. She gave parents Falun Dafa’s website so they could learn more about it.

“If your children cannot sleep at night,” Ms. Lin suggested, “you can let them listen to music from the Minghui website. It is very relaxing.”

To show their gratitude, some parents bought presents for Ms. Lin. She kindly refused them and said, “Falun Dafa taught us the relationship between loss and gain, therefore, I don’t take gifts. I will keep your Thank You card, but please keep the gift. You already paid the child care fee.”

Ms. Lin believes all of her achievements come from Falun Dafa.

“The Manifestation of Communist Party Culture Among Our Practitioners”