(Minghui.org) Today's news from China includes incidents of persecution that took place in 17 cities or counties in 9 provinces, where at least 24 practitioners were recently persecuted for their belief. 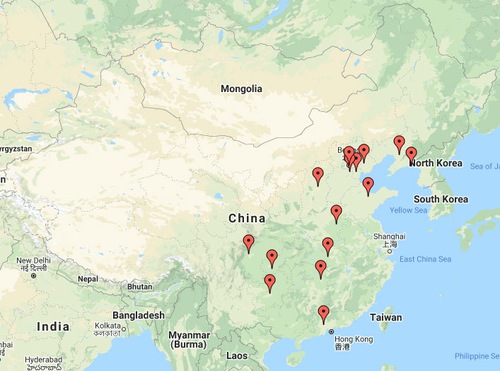 Four practitioners including Mr. Li Jie, Ms. Li Huiping, Ms. Gu Yurong and Ms. Li Yanhua, were arrested on May 29, 2020 and have been detained in the Taikang and Zhoukou Detention Centers. They were tried in November 2020. Mr. Li Jie was sentenced to five years in prison. The other three practitioners were sentenced to three or two years, respectively.

2. [Chongqing] Ms. Li Lin Sentenced to Three and a Half Years in Prison

Ms. Li Lin from Nan'an District was sentenced to three and a half years in November 2020. She is currently detained in Yinglong Women’s Prison.

Tong Xuesheng (gender unknown) was arrested by officers from the Tianhe District Police Department in July 2020 and has been detained in the Tianhe District Detention Center. Due to insufficient evidence and inconsistent facts, the procuratorate withdrew the case in November 2020.

However, officers from the Tangxia Police Station in Tianhe District fabricated evidence and colluded with the procuratorate. Tong Xuesheng’s case was filed again on February 8, 2021.

Ms. Kang Jingshu from Kunlunli, Hedong District was arrested by officers from the Wanxin Police Station on February 4, 2021. She was released on February 5, 2021.

Ms. Xu Lihua, 66, was arrested recently. Her daughter Meng Xianru went to the Liuyang District Procuratorate to inquire about the case and sent a letter to the prosecutor. Ms. Xu's daughter was arrested at home by officers from the Jili Police Station in Liuyang District on February 2, 2021. She was interrogated in the police station.

Ms. Yang Xiaochun, 77, from Danzishi, Nan'an District, was arrested in October 2020. She was detained in the Shibanpo Detention Center, Fusheng Detention Center in Jiangbei. She is currently in the Xishanping Forced Labor Camp. Her family has spent more than 150,000 yuan for her release but she is still detained.

Ms. Hu Mingqin lives in the Jinhong Community, on Youzha Street. She was harassed by several persons including Tian Yazhen from the Yejin Sub-district and two persons from the Guiyang “Law Center” on January 19, 2021. They demanded that she sign the three statements promising to renounce Falun Gong, which she refused.

Mr. Zhang Mingzhou from Tailiu Village was arrested by officers from the Shouguang City Domestic Security Division and the Wenjia Police Station on February 2, 2021. His home was ransacked. He was released on February 3, 2021.

Ms. Yang Qiru lives in Longhuai Village, Xinxing Town. She was harassed at home by two village officials including Party director Liao and Ren Chunchun, and two officers from the Xinxing Town Police Station, on the morning of January 29, 2021. They also videotaped Ms. Yang.

Mr. Chuai Zhigang works in the No. 5 Geological Team of Tangshan City and lives in Qianxi County. Mr. Chuai has been harassed multiple times since last year and pressured to write the three statements. He was demoted two levels and his “Spiritual Civilization Award” was taken from his workplace on January 27, 2021.

Mr. Bai Xuesong’s wife was informed on February 4, 2021 that Mr. Bai was under official arrest and his case had been sent to Lishan District Procuratorate.

After meeting with Ms. Zhen Miao on February 5, 2021, her lawyer went to the police station to inquire about her case. He learned that the cases against Ms. Wang Chunping, her daughter Ms. Zhen Miao and her son-in-law Mr. Zhang Shida had been filed with the procuratorate. Ms. Zhen also told the lawyer that her mother's knee was injured the third day after she was arrested and she was seen sitting in a wheelchair during the interrogation.

Ms. Sun Guizhi, in her 80s, was harassed at home on January 29, 2021. Community members from the Xinghai Community came to Ms. Sun’s home. Ms. Sun clarified the truth to them.

Ms. Gao Jiping was harassed at home by officers from the Qianfeng Police Station at the end of January 2021.

“The Power of Dafa: People Saved from Advanced Lung Cancer and the Coronavirus”