(Minghui.org) Today's news from China includes incidents of persecution that took place in 16 cities or counties in 9 provinces, where at least 33 practitioners were recently persecuted for their belief. 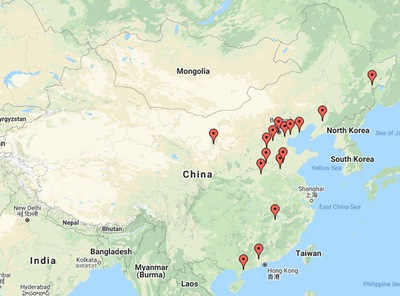 Mr. Pan Peide from Dianbai District was sentenced to three years in prison and fined 10,000 yuan by the Maonan District Court on December 17, 2020.

Mr. Pan was arrested at home on September 16, 2019. He was held in the Maoming City No. 1 Detention Center. His case was turned over to the Maonan District Procuratorate on December 17, 2019.

He was tried by the Maonan District Court on November 24, 2020. After over a year of custody, he suffered pain in his legs and joints, and had to be supported by bailiffs to walk.

After being held for over a year, Ms. Zhang Wenci, 73, from Hongqiao District, was secretly tried and sentenced to three years in prison on December 27, 2020. No witnesses or family members were allowed to attend the trial.

Ms. Zhang is currently being held in custody by the Hongqiao Judicial Bureau and the Prison Bureau, each of which dodged responsibility by referring her family to the other organization. The two bureaus also cited the epidemic as an excuse and refused to provide her family of her current location or situation.

Ms. Zhai Zihui, from Shenyang City, Liaoning Province, who works in Beijing, was sentenced to two years and six months in prison by the Chaoyang District Court in November 2020. She has appealed to the Beijing No. 3 Intermediate Court.

Ms. Li Shuyun from Fengtai District was arrested on June 28, 2020. Without any evidence, the Yongdingmen Police Station resorted to intimidation and inducement to have her and her family admit that she “distributed Falun Gong materials.” Ms. Li was held in the Dongcheng District Detention Center. She was sentenced to a three-year-and-six-month prison term several months later.

Personnel from the Xiangyanglou Police Station and the Yangguang Xingqiba Residential Committee in Hedong District recently had a talk with Ms. Yang Jinyan under the pretext of caring for single-parent families and instead pressured her to write the three statements.

Ms. Weng Qiuxiang, Ms. He Ling, Ms. Liu Fenglan, and other practitioners are still being held in a detention center.

Jining Social Security Bureau sued Ms. Li Xiaoling that she unjustly profited by taking pension payments of over 140,000 yuan when she was serving a prison term, and demanded the entire amount be returned.

The Jining Intermediate Court will hold a hearing on February 4, 2021.

Officers from the Malu Police Station and members of the Zenghualou Community went to Ms. Wang Shulan’s home on three occasions, in June, September, and December 2020. They demanded her to sign paperwork renouncing Falun Gong. She rejected their harassment with righteous thoughts.

Wang Zelin from Jiaopianyiqu Residential Committee went to Mr. Zhang Shujie’s home and pressured him to write a repentance statement on February 2, 2021. Wang threatened Mr. Zhang to suspend his pension and took pictures of him before leaving.

Over a dozen people from the Taishan District Domestic Security Division, the Sanli Police Station and the Yingxiongshan Residential Committee broke into Ms. Zhang Liping’s home and ransacked the place on February 2, 2021. They confiscated photos of the founder of Falun Gong, Falun Dafa books, a computer, three printers, a laminating machine, supplies, and over 400 yuan in cash. Ms. Zhang, 65, is a retired employee of Tai’an Winery.

She was taken to the police station for interrogation. She refused to answer the officers’ questioning, and refused to sign the interrogation transcript. She clarified the truth to them, and pointed out that they violated the constitution and the law while their job was to enforce law and order.

At 6 p.m. that day, Ms. Zhang’s husband went to the police station, signed her bail, and brought her home.

Mr. Zheng Yongxin and Ms. Yang Jie were arrested and are being held in the Zhongwei Detention Center. The local domestic security department wanted to sentence the two practitioners to prison, and has turned their cases over to the procuratorate.

Ms. Zhang Cuijuan and Ms. Liu Xiuying were arrested at home respectively by officers from the Huadu District Police Department on July 21, 2020, for distributing Falun Gong materials. The officers ransacked their homes and confiscated a number of Falun Gong related items. The two practitioners were detained.

Ms. Zhang was officially placed under arrest on August 26. She is being held in the Huadu District Detention Center. Ms. Liu was released on bail on August 10.

Officer Han went to Mr. Sun’s home on January 18, 2021, and pressured him to write three statements, but he refused.

Ms. Liu Aihua was officially placed under arrest by the Dengta City Procuratorate on January 29, 2021. She is being held in the Liaoyang County Detention Center.

They broke into Ms. Xu’s home, ransacked the place, and confiscated a printer, a computer, supplies, and printed materials.

The five practitioners were coerced during interrogations at the police station. Ms. Yuan and Ms. Xu were released that afternoon.

Officers ransacked homes of Ms. Gong, Ms. Zhu, and Ms. Chen in the evening and confiscated Falun Dafa books. The three practitioners were taken to a brainwashing center operated by the Nanchang County Party School at 10 p.m. that night.

Ms. Fu Yanying and Ms. Wang were arrested by officers from the Hongqi Road Police Station in Haigang District on the morning of January 27, 2021, for talking to people about Falun Gong.

When Ms. Wang was taking a physical examination at the Public Security Hospital that day, her daughter went there to demand her release and was stopped by the police. Her daughter was thrown to the ground by two male officers, and in the end detained in a detention center for ten days on charges of allegedly assaulting police.

Ms. Wang was also detained for 15 days. Ms. Fu was transferred from the lockup center to a detention center on February 1.

About 15 people, who claimed to be members of the sub-district administration office and the police station, broke into Ms. Meng Qiaolian’s home on February 2, 2021. At the time, six or seven practitioners were studying the Fa together at Ms. Meng’s home.

The officers confiscated photos of the founder of Falun Gong and over 50 Falun Dafa books.

Ms. Yang Xiaolin was arrested. The Mishan City Police Department called her husband Mr. Xing Delu on December 17, 2020, and asked him to deliver one thousand yuan to her. Mr. Xing brought the money to the police department the following day. He was instead arrested and held in custody for 37 days. He returned home on January 22, 2021.

“Eliminating the Attachment to Frugality”