(Minghui.org) Falun Dafa practitioners in New Zealand held an event at the Auckland Avondale Ranch on February 14, 2021, to celebrate the 370 million Chinese people who have withdrawn from the Chinese Communist Party (CCP) and its affiliated organizations. During the event, the emcee exposed the CCP’s atrocities in violating human rights and harvesting organs from living Falun Dafa practitioners. He also pointed out that by covering up the initial coronavirus outbreak, the CCP is responsible for spreading it to the world. 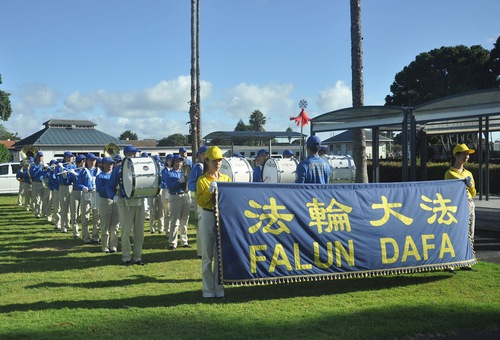 The Tian Guo Marching Band performed at the assembly to congratulate the Chinese people who have withdrawn from the CCP.

The Tian Guo Marching Band and the Waist Drum Team's performances attracted many people. The guest speakers used their own experiences to tell people about the CCP’s violent political movements that destroyed China's traditional culture. They pointed out that the Party is now threatening humanity by infiltrating into Western democratic societies. They called on the international community to clearly see the CCP’s destructive nature and resist it. 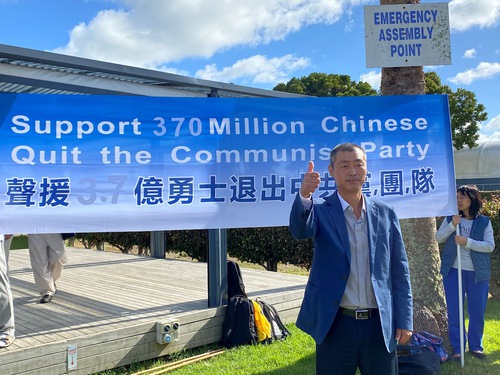 Ding Haijiang said that the Chinese people should pay attention to the media that speaks the truth.

Guest speaker Ding Haijiang said, “Through the 2020 U.S. Election, I see that the CCP's infiltration into western democratic countries has reached a startling stage. Traces of the CCP can be found in many big enterprises and banks throughout the world. The CCP inserted itself into the loopholes in western countries’ systems and has unscrupulously and comprehensively infiltrated Western society, especially the universities. The CCP agents disguise themselves as interviewers of the students and staff but in actual fact, they are disseminating communist values. These values are totally opposite to the democratic countries’ values and the common values shared by mankind.”

“The common folk in Western countries may not be able to feel the direct threat but those of us who came from communist totalitarian countries, we know its danger and the great harm it does. Communists make use of democratic countries' freedom of speech to disseminate their communist ideologies and values. The local Chinese media and newspapers even republish editorials from the Xinhua News Agency (a CCP controlled media).

He pointed out, “In Western countries, the authorities' rights are divided into the three branches—the judicial, administrative and legislative branches while the media is an independent entity that reports the situation. However in China, the CCP openly says that their media is a part of the CCP—they are the Party's mouths which help them disseminate information to the people. The media in China does not reflect the voices of the people, instead it broadcasts the will of the Party.”

Ding Haijiang thinks that since its founding, the CCP’s ultimate agenda has been to push the entire world into communism. He said, “How can we resist the CCP? I suggest that everyone watch and read the media that is coordinated by Falun Dafa practitioners. That is the only Chinese media that dares to speak the truth. If you read the CCP's media you will lose your ability to differentiate between right and wrong. What is good? What is bad? What is poisonous? We must improve our ability to recognize all that.”

Ding Haijiang said, “In China, the CCP's slander, rumors and defamation of Falun Dafa may cause people to misunderstand the practice. Before leaving China, I also had this wrong understanding. But after leaving China and interacting with practitioners, I feel that they are the best group of people who are maintaining China’s traditional values of benevolence, righteousness, propriety, wisdom and trust.”

Pastor: Until The CCP Is Eliminated The World Will Not Be Peaceful 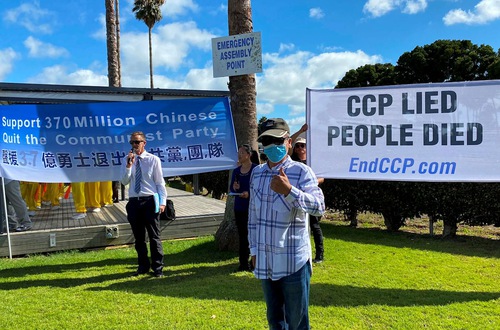 Pastor Joseph said that under the CCP's violent political regime, the Chinese people are reduced to slaves.

Joseph, a Christian pastor from China, told the assembly, “The CCP regime is the most corrupt, uncivilized, unreasonable, overbearing, and deceitful scary political regime in the entire history of mankind. The CCP claims that all the rights belong to the people but under its control, people in China cannot vote. They cannot choose their representatives. Every official is appointed by higher authorities and all the rights and power belong to the CCP.

“All Chinese people are forced to accept the regime, and all of them have been reduced to slaves. In China, people are expendable resources that the CCP exploits and exhausts.”

Joseph said, “As an individual who once lived under the CCP regime, I deeply feel the pain and hardship of being a slave. Doing the hardest jobs in the world, getting the least pay in the world for it, living in the worst living conditions—one still needs to tolerate the officials throwing their weight around and humiliating people however they like. Not only are there no benefits or guarantees, even people's basic freedom of belief has been taken away. China today has already been transformed into the world’s largest concentration camp under the CCP. Under the prosperous surface, countless people have experienced separation from their families and finally the tragic ending of a broken family. Very few people brave the danger to overcome the CCP's blockade to expose these tragedies.”

Joseph said that he is very worried about the infiltration into the Western democratic countries by the CCP. “When the evil claws of the CCP stretch out towards Southeast Asia and Africa, some people may feel that this is still very far away from us; when the footsteps of the CCP entered Hong Kong, some people still did not feel the danger; when the CCP’s fangs sunk into New Zealand’s business world, the academic world, media and even the congress and government, many people still did not feel that anything was wrong.

He said, “There's a saying that an ant’s nest can cause a thousand-mile embankment to collapse. This aptly describes the nightmare created by the CCP’s violent regime that is slowly nearing us. While we are here exposing and criticizing this narcissist regime that caused years of torment to the Chinese people, we must also remind those Chinese that have been fortunate enough to come to this haven of freedom in New Zealand that, for ourselves and our future generations’ freedom and future, we must recognize clearly the CCP’s ugly face. We must resist the CCP’s black forces and prevent the spread of the red devil’s poison.”

“Chinese People Should Chase the Evil Out of Their Homeland” 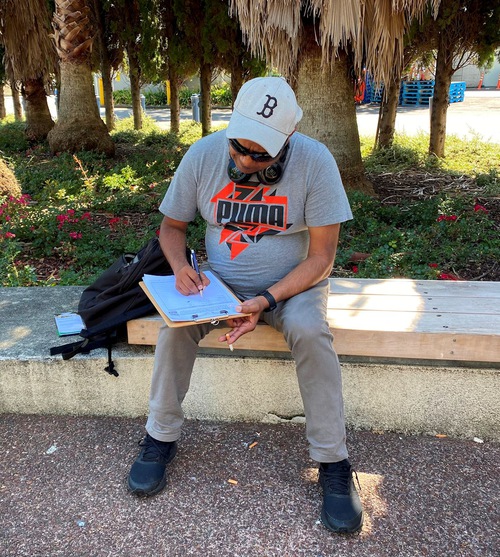 Billy Prasad signed the petition to end the CCP.

After learning why the event was held, Mr. Billy Prasad asked to sign the petition to end the CCP regime. He said, “What the CCP did (organ harvesting) is so disgusting. Why doesn’t the world know about this? Only after seeing these banners and reading the information did I know that the CCP is doing live organ harvesting on Falun Dafa practitioners for profit. This is really terrible! It also makes me really sad. The CCP does these things to strip practitioners of their basic rights as human beings.”

He explained that he knows about the Chinese culture, “I know that China has 5000 years of history and the different dynasties’ nurtured many great emperors. These emperors built their country based on benevolence and set a good example for future generations. The Chinese even built the Great Wall of China to protect their own homeland. But now, within these walls, such unbelievable evil deeds are actually happening. The Chinese people should find their great culture and chase the evil out of their homeland. The CCP uses intimidation and threats to control people—so Chinese people are always afraid. This is totally wrong.”

Falun Dafa Stands on the Side of Righteousness 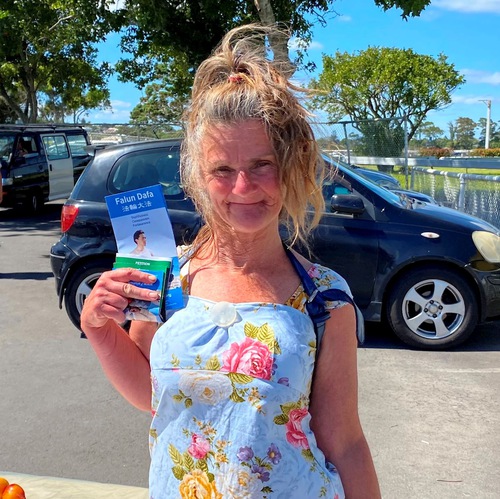 Stephanie Haynes is an animal protectionist. She said, “Falun Dafa helps people to find the lifestyle that they wish for. This is such a good thing. Such a basic appeal by the people is being persecuted by the CCP. This is really unbelievable.”

She said, “I know, China is very beautiful and it has very good traditional values. Falun Dafa's principles of Truthfulness, Compassion, and Forbearance are teaching people not to be selfish and to do the right thing. While one is kind to people, he also needs to pursue the true law as the true law is so important. That is something that we must hold fast to and that no one can take away from us. As a human being, we all want to live meaningfully. You all stand on the side of righteousness and object to the scary CCP. This is realizing your values. I want to learn from you.”