(Minghui.org) Today's news from China includes incidents of persecution that took place in 14 cities or counties in 10 provinces, where at least 30 practitioners were recently persecuted for their belief. 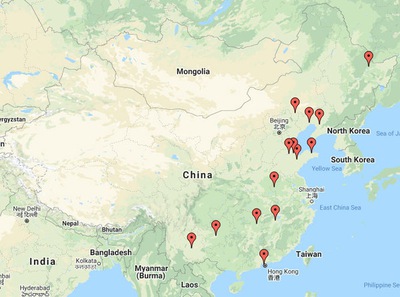 Ms. He Yunjie, 48, an employee of the Guiyang Railway Passenger Transport Section Warehouse, and Ms. Liu Shuya were reported to the police in mid-May 2020 for distributing Falun Gong materials. Both practitioners were arrested and their homes ransacked by officers from the Guiyang Railway Police Department, the Nanming District Domestic Security Division, and the Ergezhai Police Station. They were taken to the Sanjiang Detention Center in Wudang District.

Ms. He appealed. She is still being held in the detention center.

Mr. Fan Lin, 67, was arrested by officers from the Futian District Police Department on December 18, 2019, for distributing Falun Gong materials. He was sentenced to two years in prison and fined 3,000 yuan by the Nanshan District Court on December 10, 2020.

Practitioner Bai Baohua, gender unknown, from Baoshan Town in Baoshan District, was scheduled to be tried via video link on February 3, 2021.

Ms. Sun Xiaoying took her child with her when talking to people about Falun Gong on the street on April 19, 2018. She was monitored, tracked down, and arrested by the High-tech Zone Police Department. Before the trial on December 3 of that year, she left home and became displaced.

She was again arrested at the end of 2019. During the peak of the pandemic in 2020, she was sentenced to three years and six months in prison. She is being held in the Weifang Prison.

Ms. Sun Ronghua from Goubangzi Town, Beizhen City, was tried by the Beizhen Court on January 20, 2021.

Ms. Chen Xiujie from Wangtun Village, Goubangzi Town, was tried by the Linghai City Court on January 21. The trial was held via video link, and family members were not allowed to attend the hearing. They were told that the judgment would be announced within one to two weeks.

Mr. Zhou Sanyong was arrested for posting Falun Gong materials on January 22, 2021. The police ransacked his home and confiscated a printer and cell phone. He is being held in custody in Taihe County in an undisclosed location.

Ms. Sun Yuzhen, a retired employee of Shengli Oilfield, was arrested at home by plainclothes officers from the Binhai Domestic Security Division in mid-May 2020. The officers ransacked her home and confiscated Falun Dafa books and some personal belongings. Prior to her arrest, she had been monitored and followed.

Ms. Sun was taken to the police department for interrogation, which started at 9:30 a.m. She was brought home by her family at 4:30 p.m. that day.

Ms. Wang Cuixia from Bincheng District was arrested at home by officers from the Shixi Police Station in June 2020. The officers ransacked her home and confiscated all her Falun Dafa books and photos of the founder of Falun Gong.

She was taken to the police station for interrogation. The officers pressured her to write and sign statements renouncing Falun Gong.

She was released after 10,000 yuan was posted for her bail. The police have continued calling her every month, and she has been asked to go to the police station to sign paperwork.

Two officers from the Xiaying Town Police Station broke into Ms. Ding Xiuzhen’s home and asked for her medical records on the afternoon of January 16, 2021. They did not get what they wanted.

On January 19, two police officers brought a doctor to her home. They took her blood pressure before leaving.

Ms. Li Fei from Longkou City was reported to the police for distributing Falun Gong materials on January 23, 2021. She was arrested by officers from the Gangluan Police Station and the Longkou City Domestic Security Division.

She was interrogated, and officer Guo pressured her to give away the source of the Falun Gong materials. She refused to cooperate and was violently abused. She is being held in the Zhangjiagou Detention Center.

They pressured her to sign three statements and threatened that her retirement salary, her family, the future of her children and their performance review at work could all be adversely impacted. They spent the whole afternoon to threaten and coax her to sign the statements.

The Political and Legal Affairs Committee personnel harassed Ms. Wang Juzhen’s non-practitioner family members on September 16, 2020. They threatened that if Ms. Wang did not go to the police station, she would face consequences. People were staked out of her home and monitored Ms. Wang. Her cell phone was blocked.

Officer Zhou Meiqiong from the Songyang Police Station called Ms. Wang on September 22, and asked her to report to the police station.

On the morning of December 21, 2020, they were tried at the Xihu District Court, and no verdict was announced at the end of the trial.

On the morning of January 4, 2021, the Xihu District Court issued verdicts on them. All three practitioners were sentenced to four years and two months in prison and each fined 30,000 yuan.

Ms. Chen was officially fired from Jinfeng Hotel in November 2019. Her 70-year-old mother has late stage gastric cancer and needs her care.

At present, the three practitioners did not accept the verdicts of the first instance and appealed to the Nanchang Intermediate Court in mid-January 2021.

Officers from the Hongshanqiao Police Station arrested Ms. Chen Yanjun and ransacked her home on May 8, 2020. They also arrested her son, and pressured her to give up practicing Falun Gong. She was forced to make concessions against her will to protect her son.

The Changsha police arrested several practitioners who were studying the Fa together in Mr. Li Zhigang’s home on October 27, 2020. They also went to the home of Mr. Li’s sister and arrested his nephew Junjun at the same time. Junjun was arrested for no reason, and is still being held in custody. The family tried to get Junjun released through several channels, all declined by the police.

Ms. Lu Congying was arrested on the same day. The police threatened to arrest her son and get him back from the school in Guangzhou City, Guangdong Province.

After being held for a month and a few more days, they have been released on bail and returned home. Most of the families of these Falun Gong practitioners were forced to pay 10,000 yuan in bail.