(Minghui.org) A leaked secret document from Beijing revealed details of how the Chinese Communist Party (CCP) has been directing the state machinery in China to persecute Falun Gong.

Falun Gong, a mind-body Buddhist school practice based on the principles of Truthfulness-Compassion-Forbearance, was introduced to the public in China in 1992 and quickly reached 100 million practitioners by 1999. When then CCP head Jiang Zemin found that the practitioners had outnumbered the communist party members, he orchestrated a nationwide campaign against Falun Gong starting in July 1999. 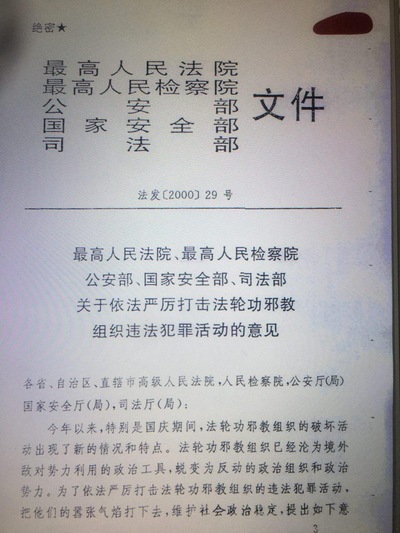 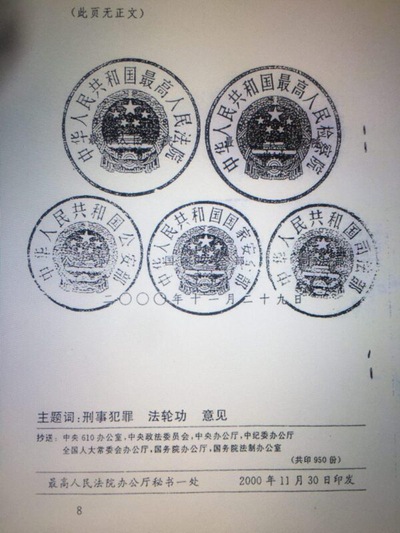 The seals of the five CCP departments stamped on the secret document on persecuting Falun Gong. (Courtesy of The Epoch Times)

The document also demanded that the judicial system apply criminal charges to Falun Gong practitioners and sentence them based on the Criminal Law, such as “inciting subversion of state power” or “defaming party and state leaders.”

Secrecy and Illegality of the Document

Chen Jian’gang, a lawyer in China who has defended Falun Gong practitioners for many years, told The Epoch Times that he was shocked to see this document. He said that though he had seen similar materials in the past, this was the first time he had seen such a document.

Chen pointed out this is “a document that is illegal in itself from the legal level, and it has no legal characteristics or validity whatsoever.” “It is another top secret document, which shows that the five departments are engaged in illegal and criminal activities that cannot be seen.”

Chen analyzed the document's reference to “Article 300 of the Criminal Law,” which states that anyone using a cult organization to undermine the implementation of the law must be prosecuted to the fullest extent possible. The CCP uses this law most commonly in its charges against Falun Gong practitioners. “In fact, Falun Gong practitioners are not organized, do not keep a membership roster, and come and go whenever they want to, not to mention they don’t do any ‘sabotaging’ activity. They just hand out materials to tell people the facts. Can any judge clarify what they had 'sabotaged?’”

On June 10, 1999, Jiang Zemin ordered the establishment of the “610 Office,” whose sole responsibility was to oversee the persecution of Falun Gong throughout the country. At one point, the central “610 Office” was able to mobilize the entire state apparatus and almost all social resources, using various systems such as the public prosecution, the judiciary, the military, the armed police, the secret service, diplomacy, education, propaganda, and healthcare to persecute Falun Gong practitioners at the national level. The “610 Office” is known as the “second central authority” in addition to the Standing Committee of the CCP’s Politburo.

The “610 Office” does not have its own official name plate for its office, nor do its members have uniforms. It does not allow courts or other judicial systems to video-record, voice-record, or take notes when it gives them instructions on how to persecute Falun Gong. All these help to hide the fact that the CCP is directing the judicial systems.

In an attempt to counteract criticism that it is above the law, the CCP declared “rule of law” as a principal governing strategy for the first time in September 1997. It wrote “rule of law” in the Amendments to the Constitution in March 1999. However, after it started persecuting Falun Gong, the CCP returned to “rule by the Party.”

The CCP eliminated the Central “610 Office” in 2018, reassigning its powers to the CCP Central Committee’s Political and Legal Affairs Committee and the Ministry of Public Security. However, the local “610 Offices” still exist and their powers are not changed.

The Epoch Times revealed an assessment form on “Prevention and Dealing with the Cult Organization Work” by the Fangshan District Political and Legal Affairs Committee in Beijing. In the form, the Fangshan “610 Office” assessed the work on Falun Gong by 93 party and government offices in the district. It deducted points from many offices who didn’t do well on propaganda campaigns against Falun Gong. 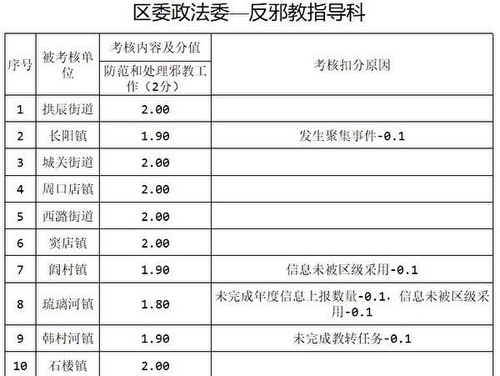 Assessing party and government offices at the same level as itself is one of the powers that the Fangshan “610 Office” enjoys. It also has special power in taking on diplomacy affairs though it is only a district-level office (lower than a city).

Before the secret document was issued, the CCP held open trials of Falun Gong cases for a short period shortly after the onset of the persecution. On November 13, 1999, the Haikou Intermediate Court in Hainan Province held an open trial of four Falun Gong practitioners and sentenced them from two to twelve years in prison.

It made the CCP upset when the United States’ Associate Press reported the case, which caught international attention since “thought and belief are not punishable as crimes” is a common understanding and universal legal practice. The U.S. House and Senate passed joint resolutions 217 and 218 to demand China to stop persecuting Falun Gong.

A month later, when Western countries celebrated Christmas, the Beijing Number One Intermediate Court held an open trial against four principals of the Falun Gong Research Association – Li Chang, Wang Zhiwen, Ji Liewu, and Yao Jie – and sentenced them to 18, 16, 12, and 7 years in prison, respectively.

After that, the CCP took its trial of Falun Gong practitioners underground. It still holds purportedly open trials sometimes, but only allows a few relatives of the practitioner to sit in, while having staffers from the “610 Office,” domestic security polices, and other people working on persecuting Falun Gong to take up all the other seats.

However, the most common law that the CCP quotes against Falun Gong practitioners is “Article 300 of the Criminal Law” as mentioned above.

Many people in China, including the local police officers, are not aware of the CCP’s cult list.

Mo Shaoping, a Beijing-based human rights lawyer, said, “Neither the Article 300 of the Criminal Law nor the decision of the National People’s Congress, nor the interpretation of law by the Supreme Court and Supreme Procuratorate, has ever stated that Falun Gong is a cult.”

Justice Will Be Served