(Minghui.org) Whenever Mr. Wang Zhen takes his daughter to the park, he never runs or jumps with her. Her daughter often asks him, “Dad, run with me. Why can't you run and play with me?”

For every parent, running and playing with their children is natural. However, it is impossible for Mr. Wang Zhen. He has artificial hip joints, so some movements are challenging for him. What happened to him that he was so badly injured?

That day, he was brutally tortured in a forced labor camp. As the result of the torture, he was permanently injured—all because he would not give up his belief in Falun Dafa and it's guiding principles, Truthfulness-Compassion-Forbearance.

Originally from Shanghai, 45-year-old Wang Zhen now lives in Germany. He graduated from one of China's most prestigious universities, Tongji University in Shanghai and majored in engineering. Handsome and popular, he had a passion for sports. He was only 27 years old when he was tortured into disability.

Fortunately, he was able to leave China and move to Germany where he married his wife Anke. Their daughter is now 7 years old. 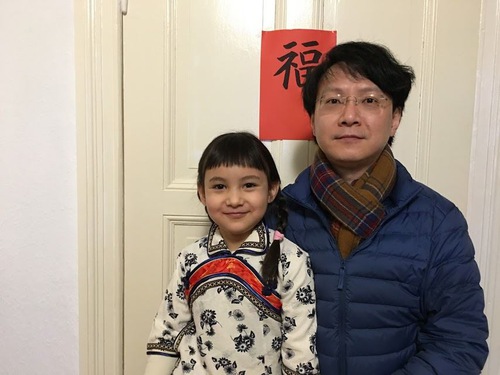 Wang Zhen and his daughter

“The path of cultivation is not easy, but I have never regretted choosing this path,” Wang Zhen said. “My life became meaningful when I began following Falun Dafa's principle, Truthfulness-Compassion-Forbearance.”

Wang Zhen was a model child. He always felt something was missing, however, and yearned for spirituality. When he became an adult he learned a qigong practice. It did not teach self-cultivation so he began looking for a real Master to guide him.

When he was 21 years old, he saw a poster about Falun Dafa on the university campus. It was 1997, and Falun Dafa was very popular and supported by the government. He went to the practice site and thus began his cultivation journey.

He realized cultivation is the process of being a better person. He measured his every word and deed according to the principles of Truthfulness-Compassion-Forbearance. He improved his moral standard and his life became meaningful.

After he graduated, Wang Zhen found a good job and soon became a company asset.

On July 20, 1999, the Chinese Communist Party (CCP) launched the persecution of Falun Dafa. Wang Zhen felt there was nothing wrong with practicing Falun Dafa, so he went to Beijing to appeal. On his way there the police searched every passenger and found his copy of Zhuan Falun. After the CCP launched the persecution in China having Zhuan Falun was considered a crime. Wang Zhen was arrested and sent back to Shanghai.

Everything changed after the persecution. His workplace wanted to fire him. They made his mother accompany him to and from work fearing that he would continue to appeal for Falun Dafa. They fired him several months later.

Wang Zhen also faced high pressure at home from other family members. His grandparents were persecuted by the CCP during the Cultural Revolution. They were terrified of the CCP, so they pressured Wang Zhen to stop speaking out for Dafa.

Wang Zhen’s mother was not a practitioner, but she knew Falun Dafa was good, so she defended it. When she said good things about Dafa, Wang Zhen’s grandparents became very angry. Both Wang Zhen and his mother lived under high pressure.

In September 2001, just before the APEC was held, police came and arrested Wang Zhen from his workplace. He was sent to a forced labor camp. He was only 25 years old.

He was brutally tortured in the labor camp. He was forced to sit on a tiny stool measuring 30cm x 20cm x 20cm for several hours every day. (Translator’s Note: Sitting on a small stool” is a form of torture. The stool is usually 6 or 7 inches high and very narrow—barely wide enough to sit on. Over the years, almost every Falun Dafa practitioner illegally detained in prison or labor camp has been subjected to this form of torture.) His legs were forced together, and he had to keep both hands on his knees. He was not allowed to move his head or his body. If he moved at all, the inmates on guard would savagely beat him.

Wang Zhen was also forced to do a type of military posture for long periods of time, including lifting one foot in the air for 10 to twenty minutes or longer. People’s toenails would become black after being subjected to this type of torture.

Wang Zhen was forced to carry manure to the farmland during other times. He had to carry two buckets that weighed more than 50 kilograms. He had to load and unload manure for three or four hours every day. His chest and back were badly hurt due to this high-intensity labor.

The policemen also tortured Wang Zhen mentally. They forced him to watch videos that slandered Falun Dafa and they ordered inmates to brainwash him.

April 25 in 2003 was a day that Wang Zhen will never forget. That day the police and some inmates made Wang Zhen repeatedly fold and unfold a quilt until he couldn’t stand up straight. Then they pushed him to the ground.

One prisoner stepped on his ankles, while another stomped on his legs. Several prisoners dragged him to the wall and tortured him using a method called “splitting the legs” They forcibly pulled his legs apart in a straight line. His ligaments were torn, causing permanent disability. 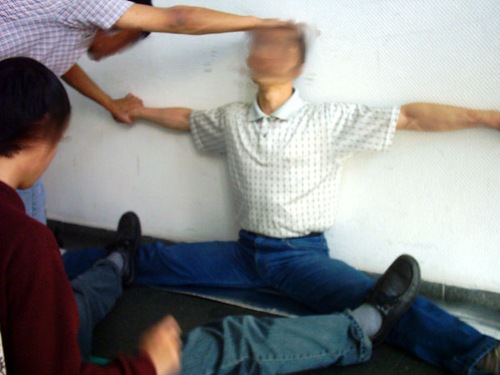 Wang Zhen's feet became swollen and 80% to 90% of his legs turned purple and black. Despite his injuries the inmates continued torturing him. They only allowed him to sleep for four hours. They burned his fingers with cigarettes and forced him to squat down.

At the end of September 2003, Wang Zhen was finally released from the labor camp. He later learned that some practitioners who were illegally detained with him had died as a result of the abuse.

Wang Zhen also found out that the same day he was arrested, his mother, who was not a practitioner, was also arrested and sentenced to two years in a labor camp only because she said Falun Dafa was good.

Even after he was released from the labor camp, the persecution continued. He was harassed frequently by local police. A year later he left China and moved to Germany. He got a good job in one of the world’s top 500 companies. Wang Zhen said he could further his career if he could go to the field sites and do more surveys. However, his disability stops him.

Referring to the brutal persecution and the intense pressure from the entire society in China he said, “It is not easy to walk on the path of cultivation but I have never regretted upholding Dafa.”

“People should seek the truth. No matter what, I will persist in upholding Falun Dafa. Everyone in my family was frightened after the CCP began persecuting Falun Dafa. Even my grandparents were insulted by the neighbors because I practiced. When my family members became ill and were hospitalized I could not go back to China to visit them because of the persecution. The CCP has caused so many tragedies.”

He hopes Chinese people can think for themselves, not listen to the CCP's propaganda, and know that Falun Dafa is good. He said, “The CCP has done so many evil things. It is doomed.” He hopes all Chinese people will withdraw from the CCP and its affiliated organizations.

“An 86-year-old Practitioner's Expression of Gratitude to Master”