(Minghui.org) To welcome Chinese New Year Falun Dafa practitioners in the greater Dallas, Texas area, activities were held in Russell Creek Park in the city of Plano. The practitioners did the exercises and wished Master a Happy New Year! 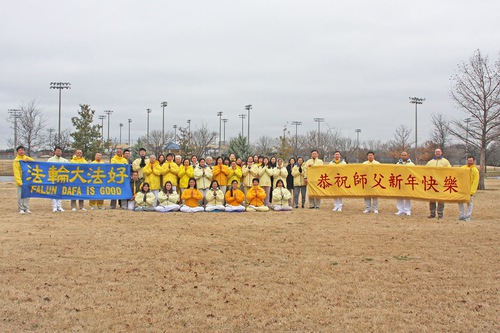 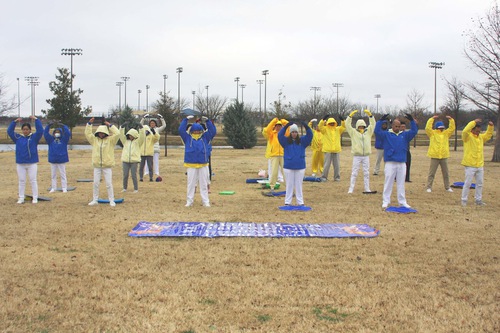 Practitioners from Dallas did the exercises in Russell Creek Park.

Practitioner in Her 90s: Healthy and Illness-Free

Mrs. Huang is in her 90s and began practicing Falun Dafa six years ago. She said that when she first read Zhuan Falun, the words in the book glowed. She thought it was because of poor lighting, so she adjusted her lamp. She then noticed all the words in the book became golden. She felt it was amazing. She said Master answered all her questions about life in very simple and plain language. She realized Falun Dafa is very special, so she decided to practice.

Mrs. Huang had an extremely low blood platelet count and was previously hospitalized for this. She also had a calcium deficiency and heart disease—so she relied on medication. She suffered from poor vision. All of these problems were resolved after she began practicing Falun Dafa. She can now sew without having to wear her glasses.

Mrs. Huang said, “I now feel what it means to be illness free. I sincerely thank Master for everything he has given me. Thank you, Master, for giving me health and inner peace. I am so lucky to be on the path of cultivation in my nineties.”

Western Practitioner: The Wonderfulness of Dafa

Rich, a western practitioner, began practicing Falun Dafa in September 2004. He was in his twenties and wanted to explore the meaning of life. He searched for information related to meditation and found the Falun Dafa website. He was drawn to the three words, Truthfulness-Compassion-Forbearance. He thought these three words were so correct, so he started to read Zhuan Falun.

In the book there were many concepts about cultivation that he never heard about. He understood self-improvement, the concept of the physical body and spirit being of one nature, etc. He decided to practice, and taught himself the five sets of exercises by watching the videos on the Internet. He also strived to think and behave according to the principles of Truthfulness-Compassion-Forbearance. He sometimes felt as though Master was with him. He had some amazing experiences—almost all the phenomena mentioned in Zhuan Falun. He sincerely walked into cultivation and tried his best to assimilate to Dafa.

Before he began practicing Falun Dafa, he had to go to the hospital almost every year to treat the flu. After he began practicing he no longer contracted the flu. He also eliminated his attachments to showing off, jealousy, and self interest. His relationship with his parents, friends, and colleagues improved because he sincerely cared about them.

He was involved in a traffic accident late last year. The hospital said he had multiple fractures and needed surgery. He reminded himself that he was a Dafa practitioner and knew he would be fine. He left the hospital and sought no other medical treatment. He recovered quickly, and two days later he was fine. This surprised the doctors, nurses, and his colleagues.

Over the years, Rich’s most profound feeling about cultivation is that Dafa will demonstrate its supernatural powers as long as one sincerely cultivates.

Ms. Li started practicing in Atlanta in 1996. She was always interested in meditation and practiced a form of qigong. She had a lot of questions, such as, what is the meaning of life, the difference between qigong practice and physical exercise, etc. She had the opportunity to read Zhuan Falun in the summer of 1996. All of her questions were answered by Master in plain language. She was shocked and eagerly looked for a local practice site to learn Falun Dafa. She felt an electrifying sensation in both her hands the first time she did the second exercise.

Ms. Li said she had changed a lot after practicing Falun Dafa for more than 20 years. She became healthy and energetic and also improved spiritually. She used to be vain and proud, but she’s now open-minded, and treats self-interest lightly. She is able to think of other people first and think from their perspective. She appreciates Master’s teaching with all her heart.

Jason and his wife Teuta began practicing Falun Dafa three years ago. Jason said, “My friend emailed me a copy of Zhuan Falun. I felt the book was profound, so I wanted to practice. After practicing for a while, I felt inner peace. I improved my relationship with my colleagues, and I understood the meaning of life." Teuta witnessed the steady improvement in her husband, so she decided to practice.