(Minghui.org) As the 2021 Chinese New Year approaches, both Chinese and Western Falun Dafa practitioners from the greater New York area have wished great and compassionate Master a Happy Chinese New Year. Amidst the pandemic, practitioners hope that people will become aware of the true nature of the Chinese Communist Party (CCP) and hope that they will remember “Falun Dafa is good. Truthfulness-Compassion-Forbearance is good” to stay safe and healthy. 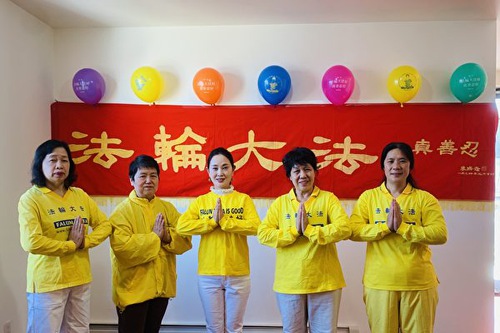 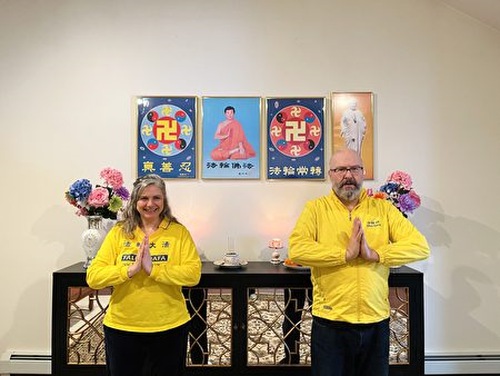 Two western Falun Dafa practitioners wish Master a Happy Chinese New Year. They are determined to cultivate with diligence and spread the wonders of Falun Dafa. 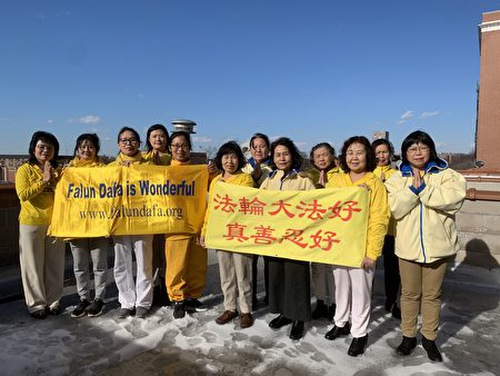 Due to the pandemic, the celebration was held indoors. Practitioners hung up “Falun Dafa is good” banners and practiced the exercises in their homes. They are determined to cultivate diligently and use every opportunity to save more people. They are grateful to Master for their peace and health. They heshi and expressed their infinite gratitude to Master, and said, “We wish Master a Happy New Year! Falun Dafa is good! Truthfulness-Compassion-Forbearance is good!” 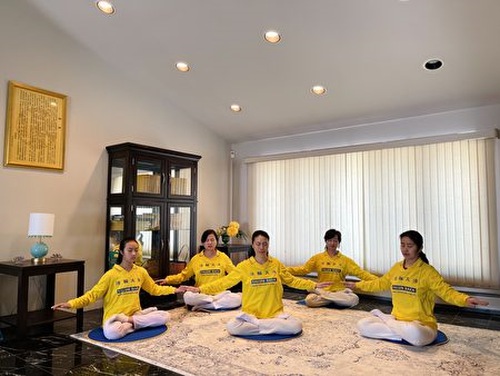 Practitioners came together in small groups and practiced the exercises in their homes.

As the CCP virus (coronavirus) ravages the world practitioners advise people to severe ties with the CCP to avoid being held accountable for it’s crimes. They ask people to remember, “Falun Dafa is good. Truthfulness-Compassion-Forbearance is good.”

Master’s Inscription On a Precious Banner

A practitioner hung up a banner with seven golden Chinese characters that said, “Falun Dafa, Truthfulness Compassion Forbearance” in his house. Although it looks ordinary, it is very precious. Master Li Hongzhi wrote the inscription on the banner, and he dated and stamped it on March 10, 1994.

This banner which says “Falun Dafa, Truthfulness-Compassion-Forbearance” was personally inscribed by Master on March 10, 1994.

Master began teaching the Fa from May 1992 to December 1994. He personally inscribed this banner on March 10, 1994. Master wrote the characters “Falun Dafa, Truthfulness-Compassion-Forbearance” with gold ink, dated and signed it, and gave it to a practitioner.

Practitioners once again displayed this precious banner on February 6, 2021.

When other practitioners saw it, they were filled with joy and moved to tears. Seeing it again after so many years reminded them that Master is compassionately saving all beings during this last havoc. Practitioners also recalled the speed with which Falun Dafa spread throughout China—in 1999, at least 100 million people were practicing. People from all walks of life, young and old, everyone knew a practitioner. The Falun Dafa exercise music could be heard in parks and community centers. Seeing this banner reminds practitioners to remain steadfast in their belief in Dafa, and persist regardless of the evil persecution.

Practitioners talked about how they benefited from practicing Falun Dafa. In the big dye vat of modern society, they feel very fortunate to obtain the Fa and return to their original, true selves.

Ms. Li Mingxi started practicing Falun Dafa in 2016 when she came to the United States to study. When she was ten years old, she was hit by a male classmate. The first bone on her spine below her neck became dislocated. For 16 years she was unable to rotate her head. To make matters worse, she developed rheumatism while attending a university and had to take medication every two or three hours. One day she realized that whenever she was near a certain classmate, her legs hurt.

“She told me that she practiced Falun Dafa. In the beginning I was scared because I believed the CCP’s propaganda against Falun Dafa. I even asked her about the “Tiananmen Self-immolation,” and whether or not she would attempt to end her own life. Only after watching the videos about the self-immolation hoax on Tiananmen Square did I realize that everything was made up by the CCP to slander Falun Dafa.”

Mingxi later developed symptoms of high-blood pressure and felt light-headed. It was so bad that she had to lay in bed, and her 90 year old neighbor took care of her and drove her to school. Mingxi was surprised by how healthy the elderly man was. He told her that he was a Falun Dafa practitioner and he encouraged Mingxi to practice.

When Mingxi decided to try practicing Falun Dafa, something astonishing happened. After reading Zhuan Falun twice, she realized that she was able to move her head and turn her neck!

Mingxi said, “In the past, I was in extreme pain whenever I moved my head. It has been 16 years and this is the first time I was able to move my neck freely without pain! This is all because I read Zhuan Falun. I felt that Dafa was a miracle! Since then, I started to practice Falun Dafa. I feel very fortunate to obtain the Fa!”

Reject the CCP and Remember Falun Dafa Is Good

While the CCP virus rages across the world, Falun Dafa practitioners hurry to save more people. Mr. Su Zhongli, who started practicing in 2015, said that there are too many fragmented and degenerate things nowadays. People should self-reflect and return to the traditional ways of thinking.

He said, “Whenever there was a plague in ancient times Chinese emperors would self-reflect. They looked inward and corrected their behavior. People today should also do this. They should recognize the evil nature of CCP. Only by abiding by the truth, will one be protected by the Divine.”

On the day of the celebration, practitioners gave performances, including singing, playing the pipa, erhu, piano, violin, flute, hulusi, and guitar. In addition, there were many quartet performances of Dafa musical pieces. The practitioners encouraged each other and the atmosphere was serene and peaceful.

A practitioner sang the lyrics of one of Master's songs:

What’s the Meaning of Life?

A hundred years of human life, for whom so busy?Fame, fortune, and feelings toward family arouse deep anxiety When the music stops and the drama is over, who am I? Heaven speaks not, leaving us confusedDafa is spreading all around youLearn the truth to guide your lost courseWe awaken people so they can distinguish good from evil And find their true selves to return to the heavens(Hong Yin III)

Ms. Sun Dongmei said that people should take a moment and listen to Dafa songs as practitioners are trying to clarify the truth to them. Falun Dafa is the only hope for mankind, while the CCP is trying to demolish and destroy humankind. She feels people need to wake up and realize the truth. She pointed out that there are many examples of people who after severing ties with the CCP, recover from the CCP virus. Ms. Sun Dongmei wants people to stay safe, and encourages them remember, “Falun Dafa is good. Truthfulness-Compassion-Forbearance is good.”

“Once Imprisoned for Six Years, 74-year-old Woman Faces Trial Again for Her Faith”