(Minghui.org) “Although I was not a bad person, I loved to play around and enjoy myself. I thought one should enjoy material comforts and live in the moment.” This is how Lian Wenyuan, a 35-year-old engineer, described himself 11 years ago. In one day his world was turned upside down—a car accident in 2010 changed everything. But the potential tragedy brought him a new beginning when it inspired him to practice Falun Dafa. 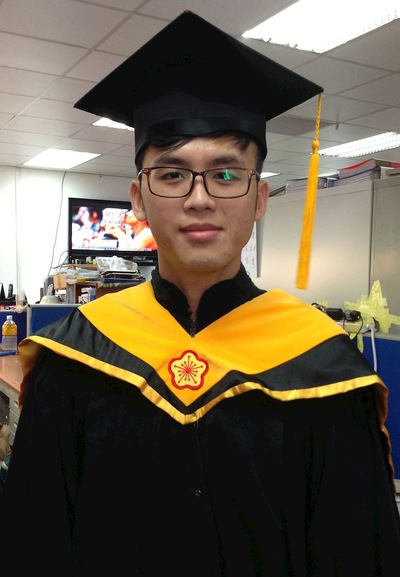 Lian Wenyuan when he graduated from the National Taiwan University of Science and Technology Department of Electronics and Computer Engineering in June 2013.

Before he began to practice Falun Dafa, Wenyuan said he felt every minute, every second should be used to pursue pleasure. He smoked cigarettes and drank alcohol. He did not sleep well at night and had stomach and intestinal ulcers. Although he was young, he was often in pain. Due to the bad injury he could not stand for a long period of time.

“When you have an insurmountable problem it causes you to evaluate your life,” he said.

So what made him become a Falun Dafa practitioner?

A car accident in 2010 had lasting after-effects. Ten months after he was discharged from the hospital, he kept experiencing dizziness and frequently consulted doctors. Western medicine doctors couldn’t find what caused the problem so he went to Chinese medicine doctors. Nothing changed. In spite of his young age, 25 years old, his health was failing.

A Blessing in Disguise

He tried other practices before. All of them promised improved health, but Falun Dafa was different. In his teachings, Falun Dafa's founder Li Hongzhi talked about becoming a better person through self-cultivation, being kind and enduring hardships. Furthermore, practitioners asked for no money as the practice was taught for free. A practitioner told him, “I cannot say those practices that want money are bad, but the one that doesn’t ask you for a single cent is the most righteous way.” Wenyuan agreed.

The following day his co-worker gave him the main book of the teachings Zhuan Falun. But after reading it briefly, Wenyuan had many questions. He also could not let go of pursuing pleasure in life. “There were many things I wanted to do and try,” he said. He put the book aside and only learned the exercises. His health did not improve and he continued seeing his doctor. He finally decided to truly practice Falun Dafa and see what happened. After he seriously began practicing he felt the accident was a blessing in disguise.

Wenyuan liked to drink and smoke. Because of the dizziness caused by the car accident, he stopped drinking, but he could not quit smoking. In Lecture 7 in Zhuan Falun Master Li wrote that a practitioner should not smoke. The next time Wenyuan lit a cigarette, the taste was disgusting and he threw it away. Out of curiosity he tried to smoke again but did not feel the same kick. Just like that, his addiction disappeared. He realized how terrible cigarettes smelled.

He smoked since the age of 16 but six months after he began practicing Dafa, he no longer had the urge to smoke. When he told his friends about this experience, they were amazed by the power of Dafa.

After he began practicing Falun Dafa, his dizziness faded. His other ailments slowly disappeared too. He no longer had backaches and he could stand for a long time. When the discomfort in his ears kept him awake, he read Falun Dafa books instead of sleeping. He felt a Falun (law wheel) spinning around his ears, afterward, his insomnia was resolved.

Recently, a business acquaintance complained about suffering from insomnia. Wenyuan shared his experiences after practicing Falun Dafa. He said he also had trouble sleeping. He was exhausted but simply could not fall asleep. Now, his quality of sleep is excellent. He feels calm and at peace.

Letting Go of Resentment Towards His Father

Wenyuan feels that the greatest change he experienced after he became a practitioner was letting go of his resentment towards his father.

He always felt that his father owed him. After he began practicing Falun Dafa he knew this was something he needed to work on. One time, his father wanted to buy a car. Without talking it over with his son, he bought one. “In the past, I would have fought with him. I reminded myself to have compassion. I explained why it was not the right time to buy a car. In the end, I helped him return the purchase,” he said.

Five years later, his father wanted to buy a car again. He complained to his wife that his son wouldn’t allow him to choose a car. This time, Wenyuan reflected on himself. He discovered that he still harbored resentment and was reluctant to bear the cost of buying a car.

He told himself he needed to end this conflict and that it was a cultivation opportunity. The next day he offered to take his father to buy a car. He considered things from his father’s perspective. They looked at new cars as well as second-hand cars and Wenyuan finally bought one.

“I tried to avoid the problem, but when I decided to face it and let go of my attachment, I felt I was changing and my parents felt it too,” he said.

“If I did not practice cultivation, I cannot imagine what my moral values would be today. Cultivation has made me a more stable person. When colleagues or friends have problems, they confide in me. I share with them my opinion from the angle of a practitioner and give them suggestions,” he said. This is another positive change he gained from practicing Falun Dafa—learning to help others.

“75-year-old Man Sentenced to Four Years for His Faith”