(Minghui.org) Today's news from China includes incidents of persecution that took place in 14 cities or counties in 4 provinces, where at least 31 practitioners were recently persecuted for their belief. 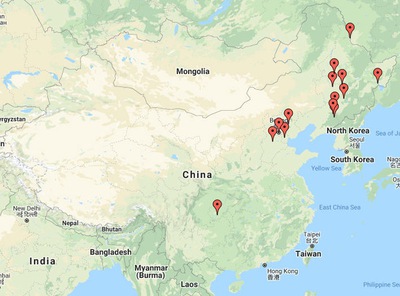 Ms. Zhao Yanhua, 39, an engineer of Shou’an Fire Protection Company, was arrested by officers from the Liqiao Police Station on November 15, 2019. She was taken to the Shunyi Detention Center that evening. After 10 months of custody, she was sentenced to three years in prison and fined 3,000 yuan by the Shunyi District Court on September 16, 2020. The court did not allow her family members to attend the trial.

Officers from the Yongji County 610 Office and the local police station broke into Mr. Liu Fuchen’s home in Chaluhe Town in December 2020. They pressured him and his wife to sign statements, and took the couple to the brainwashing center.

Ms. Ai Jinxia is from Changling County. Her case was turned over to the procuratorate.

Ms. Yin Lanhua, Mr. Yue Changyou, and Ms. Ji Fengxia refused to accept sentencing of the Longshan District Court and appealed to the Liaoyuan Intermediate Court. The intermediate court did not hold a hearing, and on December 24, 2020, it rejected the appeals and upheld the original sentencing.

Ms. Liu Wenrong, in her 70s, was arrested at home by five or six officers from the Wanxing Police Station and the Nankai Police Department on the morning of June 6, 2019. She was held in the Nankai Detention Center. It was recently reported that she was sentenced in the spring of 2020, and her prison term was around four years.

Ms. Shao Shuwen was arrested by officers from the Jixianli Police Station in Beichen District in 2020, for distributing Falun Gong materials. She was sentenced to six years in prison and fined 50,000 yuan.

Ms. Su Jinrong was arrested by the Jixianli Police Station in 2019. She was sentenced to five years in prison and fined over 20,000 yuan.

Ms. Zhao Zhiyan was sentenced to seven years in prison. After being released from prison, she was deducted all the pensions paid during the seven-year sentence, totaling over 100,000 yuan.

Ms. Jia Shuyun was sentenced to prison in 2009, and her pension has been suspended for life. Up to now, she has not received any pension for over a year.

Mr. Xia Hongmin and two other female practitioners from Laishui County were arrested by officers from the Laishui Police Station when talking to people about Falun Gong on the morning of January 20, 2021. Their current whereabouts are unclear.

Ms. Liu Ruilian from Fengning County was arrested at home on July 1, 2020. She was tried on August 27. Her lawyer pleaded not guilty for her. It was learned on September 24 that she was sentenced to three years in prison. She appealed, but the verdict was upheld. She was taken to the No. 14 Ward in Shijiazhuang Women’s Prison on November 17.

The nine practitioners were interrogated at the Hebei Police Station. They were forced to hand over Falun Dafa books. The officers confiscated a computer and two printers from Ms. Chen’s home at 6 p.m.

Ms. Yu Guanghe was arrested in November 2015. She was later sentenced to nine years in prison and held in the Yongchuan Prison.

Her family members said that her pension had been suspended, and the government demanded her to return pension payments she received in the past few years, totaling more than 200,000 yuan.

Six officers, including Ye Maochuan from the Tongliang District Domestic Security Division, broke into Ms. Han Zonglan’s home and ransacked the place on February 8, 2020. They took her to the police department for interrogation. They also forced her husband and their son to transcribe for her three statements that had been printed out. Later, they would call or harass her at her house from time to time.

At the end of 2020, Liao Fang, who is responsible for monitoring Internet content in the Longcheng Community, came to her home to harass her.

Officer Guo Yi called her at noon on January 19, 2021, and told her to go to the police department, but she refused. Guo threatened that if she did not go, the police would take her there in handcuffs.

Party secretary Liu Keyong of Changfeng Village, Handian Town, led a group of people and look for Ms. Sun Guijie to sign paperwork on January 29, 2020. She was not at home and they then went to her relatives’ homes to look for her. They did not find her.

At about 10 p.m. on January 19, 2021, three officers from the Beidaying Police Station forced Ms. Zhou Guangyan’s husband to lead them to the home of Ms. Zhou’s mother to locate Ms. Zhou, who was taking care of her mother. They knocked on the door, saying that they wanted to take pictures of her and verify a few things with her. Ms. Zhou refused to open the door.

They knocked on the door vigorously for about 20 minutes. They said they would find a locksmith if she did not open the door. Later, they told her husband that they would come to talk to her again in two days.

Practitioner Che Guohong (gender unknown) from Xunke County, was taken to the Heihe City Detention Center at the order of the Xunke County Court on November 4, 2020.

The court was originally scheduled to sentence Che in mid-December.

However, the court did not hold a hearing in mid-December. On January 13, 2021, the court sent a ruling to Che’s lawyer, the main content of which was that due to the epidemic, the court decided to terminate the hearing of Che’s case.