(Minghui.org) Today's news from China includes incidents of persecution that took place in 19 cities or counties in 12 provinces, where at least 32 practitioners were recently persecuted for their belief. 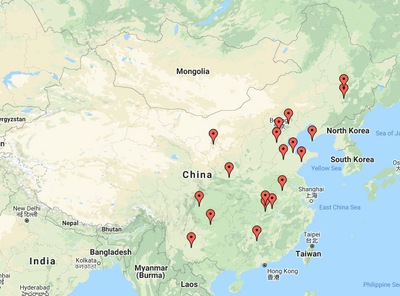 Ms. Tan Guohua from Longhua County went to Shengfang Town to visit her children and husband on June 1, 2021. She was arrested on her way there. She was taken to and then held in the Shuangfengsi Detention Center for over three months.

Ms. Tan was sentenced to one year in prison by the Luanping County Court in September. The court did not give her family the judgment, and instead only notified them to pay the 5,000 yuan fine. Ms. Tan is being held in the Shijiazhuang Women’s Prison.

Ms. Gao Guirong and Ms. An Caifeng from Weicheng District received an indictment from the Qindu District Procuratorate on November 10, 2021. The Qindu District Court also notified the two practitioners not to go out in the near future, pending a court hearing.

On March 26, officers from the Caihong Police Department broke into Ms. Gao’s home and arrested her. They ransacked her home and confiscated a computer, a printer, DVDs, paper bills, printed materials, and U disks. At the same time, Ms. An’s home was also ransacked. DVDs and printed materials were confiscated. The Qindu Detention Center refused to admit the two practitioners for health reasons. They were released on bail.

In early November 2021, due to the pandemic outbreak, Yinchuan authorities conducted a large-scale nucleic acid test. During the process, the authorities identified Zhao Lin (gender unknown) when checking personal information. Zhao was taken away by the police. Zhao’s whereabouts are currently unknown.

In 2021, Gulin County officials demanded 100% “transformation” of Falun Gong practitioners. At present, they openly arrest practitioners and ransack their homes.

Party Secretary Zeng Xiangguo of the Taiping Town government led seven or eight people from the police station and community management office to harass Mr. Hu Biao, Ms. Liu Daiqiong, Ms. Xu Yukai, Mr. Song Guangcai, Mr. Luo Guoqiang, who had not been “transformed.” If the practitioner did not open the door, they would smash the door and break in. These people ransacked the practitioners’ homes and confiscated all their Falun Gong-related audio and other equipment, books, and photos of the founder of Falun Gong.

It was reported that after Mr. Hu left home, Gulin Town government officials and police repeatedly looked for and talked to his son to force him to tell about Hu’s whereabouts. Mr. Hu’s son had to go to the police station to report every month. Mr. Hu’s home was ransacked four times.

Over 10 relevant personnel ransacked Mr. Luo Zhengguo’s home on November 5 and confiscated Falun Gong books, printed materials, and audio equipment. Mr. Luo was arrested and later released. Mr. Luo and his wife were forced to leave town the next day. An 86-year-old elderly person now lives alone, who cannot walk or take care of themselves. Mr. Luo’s pension has been withheld for more than ten years, and his family could barely survive.

Staff members of the community management office pressured Ms. Liu Shaolan to transform, which she refused. She left home for a few months. Ms. Zhou Mofen refused to transform, and people put pressure on her three daughters to ask their mother to transform.

Ms. Chen Zirong was arrested at home at the end of September 2021. The police ransacked her home and confiscated Falun Gong books, printed materials, and paper bills with information about Falun Gong written on them. She is being held in a detention center.

Ms. Zhang Guiying was arrested at home by four police officers on November 9, 2021. Further details are not available.

Ms. Long Yingbo recently went to a farmers market and had a brief conversation with someone. The plainclothes officer who followed Ms. Long took her to the Bailutang Police Station. The officers body-searched and interrogated her before releasing her.

Domestic Security officers from the Bindong Police Department called Mr. Liu Haibo to go to the Bindong Police Station on November 12, 2021. Mr. Liu went, and he was placed in criminal detention for “using (slanderous term deleted) to interfere with law enforcement.”

Liu Haibo was originally an accountant in charge of the Rod Pump Company, a subsidiary of the Shengli Oilfield Plateau Petroleum Equipment Co., Ltd. He was expelled from his job in 2015 for suing Jiang Zemin.

On the morning of November 13, 2021, Party secretary Hao Jincheng in Haojia Village, Haojia Town, Kenli County, led twelve people to Ms. Ren Xiuhua’s home and pressured her to write guarantee statements renouncing Falun Gong. Ms. Ren refused to sign. Four or five people stepped forward and grabbed her hand to forcibly place her fingerprints on the paperwork. Prior to November 13, these people went to her home and harassed her several times.

Officers from the Mingshui No. 2 Police Station, in Zhangqiu District, broke into Ms. Li Yueying’s home and arrested her on November 2, 2021. They are working on placing her in detention for 12 days.

The officers forcibly took Ms. Li’s fingerprints at the police station. They then took her to the Zhonggong No. 3 Detention Center. Due to her high blood pressure, she failed the physical examination and was denied admission to the detention center. She returned home that night.

Mr. Lu Zhanping from Huabei Oilfield received a call on November 2, 2021, from the Social Security Agency and was told that his pension was suspended in April 2021. The agency did not notify him until six months after they suspended his pension.

Director Sun of the Huachang Police Station and Lin, a male staff member of the Gangyu Community Management Office, went to Ms. Yan Shujuan’s home and pressured her to sign three statements, which she refused.

Mr. Ma Liangjiu from Qianfeng Community, Tianjia’an District, was arrested by officers from the Chaoyang Police Station on September 30, 2021. The officers ransacked his home and confiscated Falun Gong books and a computer. Mr. Ma has been placed under residential surveillance.

Ms. Kong Qingping was reported to the police on February 24, 2020. Five officers from the Lijia Street Police Station, Shahekou District, arrested her and ransacked her home.

The police station officers took turns to interrogate and threaten her. After being held for 24 hours, she walked out of the police station with righteous thoughts. She was then placed under residential surveillance.

After she returned home, people from the Lijia Street Police Station and sub-district administration office often harassed her and her family. As a result of this ongoing harassment, they were unable to live and work normally. Six months later, Ms. Kong was told to go to the police station again, where they would notify her in person about the change of her status to be released on bail. She did not go. They kept calling and harassing her family. Ms. Kong eventually went to the police station, where she was pressured to sign paperwork. She refused to cooperate and was detained one day and one night.

The following day the police station called her family to pick her up. Her family had to pay a fine of 10,000 yuan. The police repeatedly forced Ms. Kong and her family to sign paperwork, but she refused to cooperate. She was forced to leave home and become displaced.

Elderly Ms. Gao Zhengli from Jiangxi Street was arrested and her home was ransacked on November 2, 2021. Ms. Gao was detained, and it is not clear where she is being held.

Over 10 people from the Domestic Security Division and the community management office arrived at the door of Ms. Liu Guiying’s home on November 10, 2021. Ms. Liu’s husband blocked the doorway to prevent them from entering. These people forcibly carried her husband out of the house, and then entered and ransacked the place. They confiscated 13 Falun Gong books, photos of the founder of Falun Gong, and a Falun diagram.

On November 13, three men broke into Ms. Liu’s home and forced her husband to sign paperwork. They threatened that if they arrested Ms. Liu before she came back on her own, she would be sentenced to prison and would lose her pension completely. These people went to her home again and harassed her the following day.

At 8 p.m. on November 13, the same group of people broke into Ms. Luo Taoying’s home and pressured her and her son to sign paperwork, which she and her son firmly refused.

Not long ago, quite a few people from the Domestic Security Division and the community management office broke into the home of Ms. Zhou’s mother, a practitioner who was over 80 years old, and confiscated a copy of Zhuan Falun.

Ms. Wang Xianqiu from Jiangxia District will be tried by the Hongshan District Court at the Trial Chamber of the Donghu High-tech Development Zone Court at 9 a.m. on November 19, 2021.

“I Stopped Complaining and Learned to Balance Family, Work and Cultivation to Truly Let Go of My Attachments”