(Minghui.org) Falun Gong practitioners demonstrated the Falun Gong exercises in La Carolina Park in Quito, the capital of Ecuador on December 25 and 26. The calm and peaceful exercises drew the attention of people who’d come to the park to celebrate the Christmas holiday. Many stopped to watch and learn about the spiritual practice. 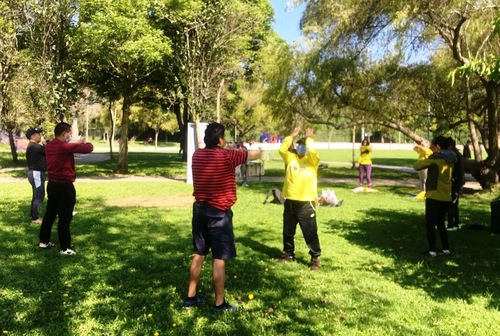 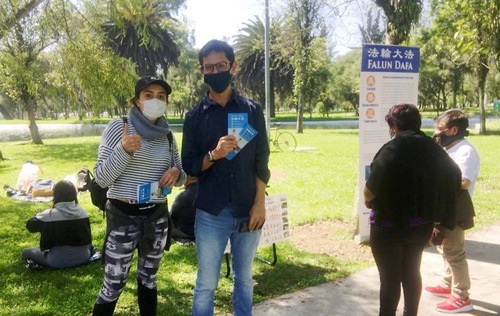 Through Falun Dafa’s gradual and slow movements, as well as the sincere and patient explanations of practitioners, people learned about the spiritual practice and how evil and cruel the Chinese Communist Party's (CCP) persecution of the practice is.

Some people learned the exercises at the event. After hearing that the CCP has persecuted such a peaceful practice for more than 20 years, they condemned the persecution and said that they would tell more people about Falun Gong’s effort to end the persecution.

Many people said that the CCP’s persecution is unreasonable and that they support Falun Gong. Some asked for more brochures to pass on to relatives and friends.

A practitioner who participated in the activity said, “Ecuador is experiencing the rainy season, and it rains almost every day. On the morning of December 25, however, the gloomy and rainy sky gradually cleared. It did not rain until the end of the activity on December 26. Then, the rain poured down, and was accompanied by thunderstorms.”

Another practitioner said, “During the Christmas holidays, it was quite crowded in the park. Practitioners were kept busy distributing truth-clarification brochures.”

“Finally, I Learned to Look Within”