(Minghui.org) The Indonesia Tian Guo Marching Band composed of Falun Gong practitioners held a parade and performance at Melasti Beach in Bali, on December 23, 2021. They celebrated Christmas, as well as welcomed the 2022 New Year. During the event, Falun Dafa, also called Falun Gong, practitioners introduced the spiritual practice to tourists and talked about the Chinese Communist Party’s (CCP) persecution.

At the end of the parade, all the band members partook in a group photo to wish the founder of Falun Gong, Master Li Hongzhi, a Happy New Year. 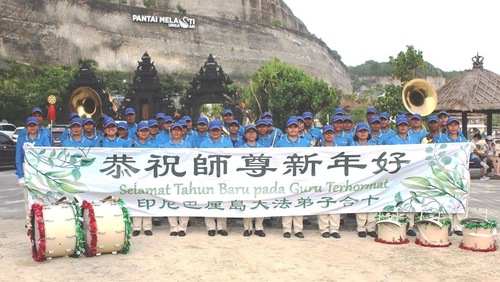 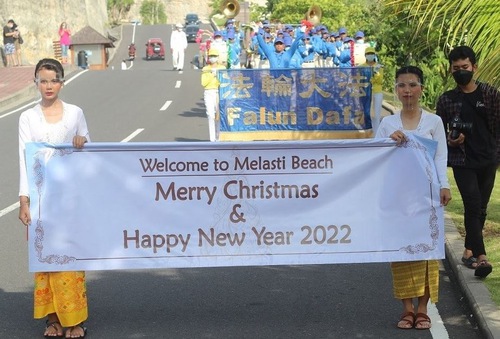 The parade started at the top of the mountain, took the road to the beach, and then to the white sand beach. The loud drum music attracted tourists to stop and watch the parade and performance.

On the beach, the fairy dancers performed a variety of traditional dances, which were joyous, peaceful, and beautiful, expressing practitioners’ New Year’s wishes to the people.

Many tourists used their mobile phones to record the performances of the band and the fairy dancers. People also enthusiastically accepted brochures distributed by Falun Gong practitioners and asked about related information.

Falun Dafa (also known as Falun Gong) was first introduced to the public by Mr. Li Hongzhi in Changchun, China, in 1992. The spiritual discipline is now practiced in more than 100 countries worldwide. Millions of people who have embraced the teachings—which are based on the principles of Truthfulness, Compassion, and Forbearance—and learned the five exercises have experienced improved health and well-being.

Under Jiang’s personal direction, the CCP established the 610 Office, an extralegal organization with the power to override the police and judicial systems, and whose sole function is to carry out the persecution of Falun Gong.

Minghui.org has confirmed the deaths of thousands of practitioners as a result of the persecution during the past 22 years. The actual number is believed to be much higher. More have been imprisoned and tortured for their faith.