(Minghui.org) Both the lower and upper parliaments of the Australian government passed a law adopting the Magnitsky Act in early December 2021. The bill passed in Australia is known as the Autonomous Sanctions Amendment (Magnitsky-style and other Thematic Sanctions) Bill 2021. Minghui correspondents interviewed several human rights advocates experts and community leaders in Australia and New Zealand. 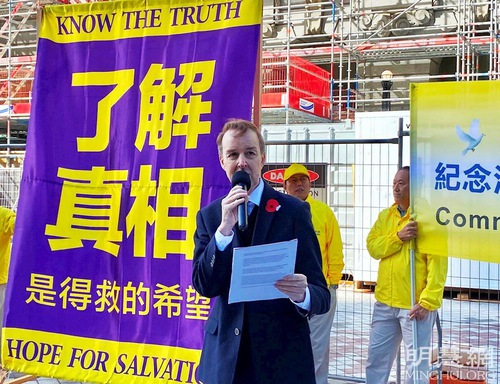 Kerry Gore, a renowned human rights lawyer in New Zealand, said he felt encouraged by the passing of the Australian version of the Magnitsky Act. He said, “It should encourage the New Zealand Parliament to enact similar legislation here.

“This type of legislation will enable autonomous sanctions to be applied to a foreign government entity, a member of a foreign government entity, or another person or entity overseas. Those involved in serious violations or serious abuses of human rights, for example, individuals complicit in the persecution of Falun Gong practitioners and other prisoners of conscience in China, can be subjected to these autonomous sanctions.

“This is a most welcome legal development, and New Zealand would do well to implement similar legislation. It will be an important addition to the legal armory in the fight to end persecution.

This Bill Will Definitely Be Put into Practice 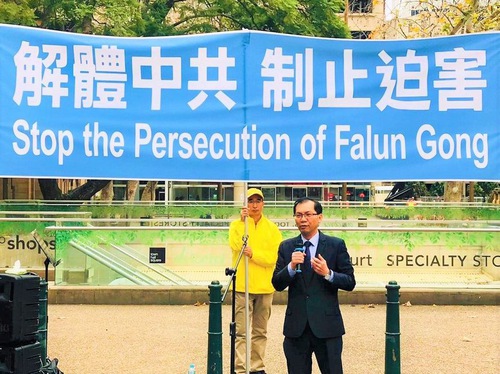 Mr. Paul Nguyen, President of the Free Vietnamese Community in NSW, spoke at a Falun Gong rally held on July 17, 2020, to call attention to the 21-year-long persecution in China.

Mr. Paul Nguyen, President of the Free Vietnamese Community in NSW (New South Wales), was one of the human rights activists in Australia who strongly urged the bill be passed. He said, “Parliaments in countries such as the United States, Australia, Canada, Japan, Europe, and New Zealand need to speak up. I believe that in the near future they will work on the spirit of the Magnitsky bill. Because if a Chinese official in a certain commune, district, or province tolerates the practice of organ harvesting and then comes to the United States to invest, it is very contrary to conscience. It is the duty of the politicians in those countries to speak up.

“This issue is very important to Australia's democratic society, so when the bill is introduced, Australia will stand up straight to work in the spirit of this bill, putting the interests of the nation first and voice of a democratic government, not economically dependent. When this bill is passed, the Australian government as well as other governments around the world like the United States will absolutely apply it.”

“Organ harvesting is a barbaric thing that has never been seen before in human history so the European Parliament has spoken out strongly. I think all countries in the world should and must do this because of the fact that organ harvesting is the ultimate human rights violation, and nothing is more brutal. Democratic societies must speak up for the voiceless, the oppressed.”

Mr. Nguyen said, “Truthfulness-Compassion-Forbearance are core moral values so that we can distinguish what is right, what is wrong, and what is the basic morality of humanity. When each of us internalizes the values of Truthfulness-Compassion-Forbearance into our thinking, people will surely immediately recognize the wickedness of the communist regime. This is also the driving force behind Falun Gong practitioners and those who understand it.

“The value of Truthfulness-Compassion-Forbearance is the most basic thing we must maintain and uphold. At the same time, we must promote this good value to help the society become better. If we do not have this basic value, it will become normal for people to be oppressed, bullied, and beaten.

“Therefore, the value of Truthfulness-Compassion-Forbearance helps us to realize that this persecution cannot be normal, immoral acts cannot be normalized. The persecution should be considered a very unfair act and should be punished. If we take the persecution of Falun Gong practitioners as normal, our society will end up a barbaric and heartless society. We cannot lose sight of the basic values of Truthfulness-Compassion-Forbearance.”

The Bill Will Help Stopping Organ Harvesting by the CCP 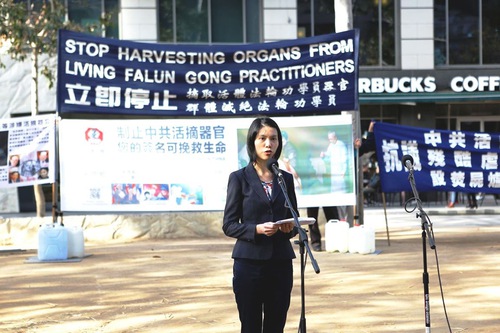 Dr. Lisa Lau, representative of the Melbourne branch of Doctors Against Forced Organ Harvesting (DAFOH), spoke at a rally exposing the CCP’s crimes of organ harvesting held in Melbourne’s City Square on May 23, 2015.

Dr. Lisa Lau, representative of the Melbourne branch of DAFOH, said the bill will help stop the CCP’s organ harvesting crimes against humanity. She said, “We are glad that Australia has passed the amended Autonomous Sanctions Amendment Bill. It is a step in the right direction to join other countries who have similar Magnitsky style laws. These laws have shown to make a real difference in international human rights, and I feel we are one step closer to ending forced organ harvesting in China.” 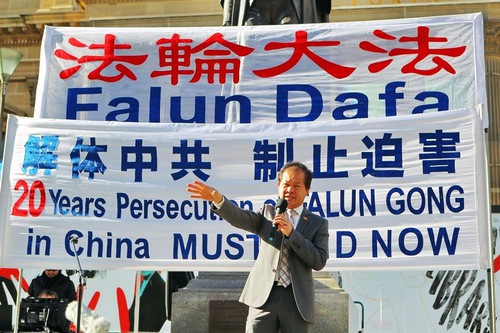 Mr. Bon Nguyen, President of the Vietnamese Community in Australia – Victorian Chapter, spoke at a rally held in central Melbourne on July 20, 2019.

Mr. Bon Nguyen, President of the Vietnamese Community in Australia – Victorian Chapter and a chemical and bioprocess engineer, was one of the active campaigners for the bill. He said, “Those who are persecuting innocent people like Falun Gong practitioners will have to think twice when Australia passes this bill. This act not only gives the Australian government some powers to punish individuals or organizations that violate human rights, but it also allows Australian nationals from those countries to have the right to monitor and report to the Australian government individuals and organizations that violate human rights. We become defenders of this Australian value.”

He said people respect one another in Australia and enjoy freedom. “I must stand up for that freedom. Only when you have human rights can you have freedom.”

He hopes to help Chinese nationals enjoy this freedom. He said, “I am Vietnamese, but I personally understand the Chinese regime better than the politicians here. I have a promise to Falun Gong practitioners and other people who are being persecuted. When they need me, I will be there, because no one understands and sympathizes with these people, because they are victims. I understand the difficulties and suffering they go through. I think Australians need to know—Westerners need to know—about the ongoing persecution.

“I have had the good fortune to work with Falun Gong practitioners for a long time. I have always supported and accompanied them for many years. I have many friends who are Falun Gong practitioners. They are very peaceful people who ask for nothing more than for them to have the opportunity to practice Falun Gong, a practice that makes our body healthy and our mind better. Letting us live in a more peaceful society is a very good value for society.

“In the past, I often participated in demonstrations to support Falun Gong practitioners and Tibetans against the Chinese government in persecuting people. Before, I met Caucasian Australians who opposed me, but now when I meet them, they even support us in the protests against the Chinese Communist Party. I feel there is a change in people's perception of the CCP.” 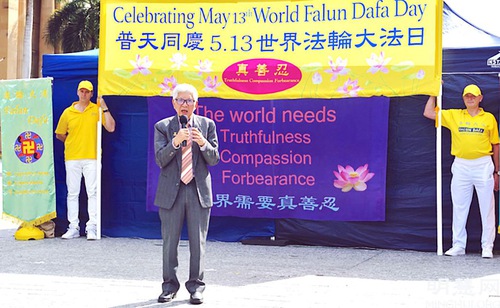 Dr. Cuong Bui, President of the Vietnamese Community in Queensland, spoke at an event celebrating World Falun Dafa Day held at King George Square on May 8, 2021.

Dr. Cuong Bui is the President of the Vietnamese Community in Queensland as well as one of those who has actively campaigned for the passing of the Magnitsky Act. He has also supported Falun Gong in resisting the persecution at many public events.

“I have a clear understanding of the communist regime. The Communist Party only lies. The political situation in the past two years has changed quite a bit and the Australian government, people of both parties in the Australian parliament, have woken up and seen how dangerous the Chinese Communist Party is for the country—Australia, not just Falun Gong practitioners and the Chinese people.

“The situation with the Covid-19 pandemic has awakened everyone. It has made the Australian government and the Australian people more clear about the danger the CCP poses to Australia. Australia will of course act when it comes to this legislation.”