(Minghui.org) Today's news from China includes incidents of persecution that took place in 20 cities or counties in 8 provinces, where at least 37 practitioners were recently persecuted for their belief. 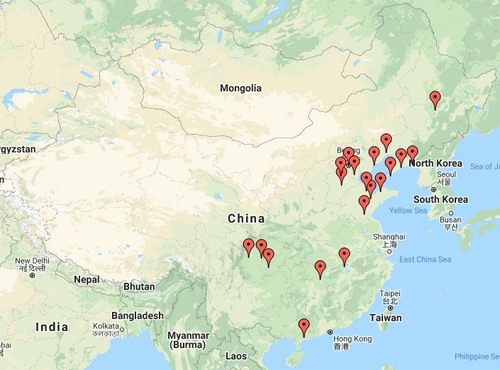 1. [Beijing] Cases Against Eleven Practitioners Sent Back to Procuratorate for Additional Investigation

It was learned that the court recently sent the cases against eleven practitioners including Xu Na back to the Procuratorate for additional investigation.

The eleven practitioners, including Xu Na, were arrested and detained for more than a year after posting epidemic photos on the Internet. They were tried in the Dongcheng District Court on October 15, 2021. Five lawyers, including Liang Xiaojun, defended their innocence in court. The well-known lawyer Liang Xiaojun was officially revoked on December 16, 2021.

Ms. Pan Huimin was reported to police for distributing truth-clarifying materials in a residential community and was arrested by officials from the Qingguang Police Station on the afternoon of January 14, 2021. She was detained in the Beichen Detention Center and later sentenced to three years in prison.

Ms. Jia Fengzhi was sentenced to three and a half years in prison for distributing calendars which had information about Falun Gong. She was detained in the Pinggu Detention Center for nearly two years and was then transferred to the Tiantanghe Women’s Prison around November 18, 2021.

While detained, Ms. Jia developed severe stomach problems and rheumatoid arthritis. Her blood platelet count dropped to 20. She was sent to the Chaoyang District Emergency Center and placed in an ICU. She was taken back to the Daxing Women’s Prison on December 17, 2021.

Ms. Bi Guiying was recorded by surveillance cameras and was arrested at home by officers from the Yongchang Police Station on the morning of December 14, 2021. Her home was ransacked. Her personal belongings were confiscated including a tablet, cell phones, amulets, etc. Ms. Bi was taken to the police station and was placed under official arrest. She is currently held in the Fengcheng Detention Center.

Ms. Bi was arrested by officers from the Xingdong Police Station on June 14, 2016. She was sentenced to one year in prison and fined 5000 yuan by the Yuanbao District Court on September 28, 2016. She was taken to Liaoning Women’s Prison.

Mr. Yu Hongbing from the Xicheng District has stayed away from home and wandered around for a long time. He was recently arrested. The details are unknown.

Village official Liu Chunyu and a number of Louzhangzi Township government officials went to Mr. Yao Zhenda’s home on November 21, 2021. Mr. Yao was not at home. They called him later and pressured him to sign a guarantee statement, which he refused.

Three township officials and one police officer went to Mr. Yao’s home again around November 26, 2021. When they tried to search a locked room, Mr. Yao and his wife stopped them because they did not have a search warrant.

Later, many people from the township government and the county police department went to Mr. Yao’s home with a search permit. Mr. Yao was not at home. They went to Mr. Yao’s former workplace but he was not there. They returned two days later but he was not there. They returned at around 6 p.m. on December 11, 2021. They searched his house including the locked room. They confiscated an old calendar.

Ms. Chen Yuping has stayed away from her home for two years to avoid harassment by the local government officials and police officers. Jiang Zhixiong, head of the 610 Office in the Zhanqian Road Sub-district Office, called Ms. Chen’s son on December 13 and 14, 2021, and pressured him to advise Ms. Chen to sign the three statements. He threatened to arrest Ms. Chen if she did not cooperate.

Mr. Gao Peng’s family received a notice on December 17, 2021, stating that Mr. Gao will be tried online by the Qingzhou Court on the afternoon of December 20, 2021.

These people went to harass Ms. Gao Guorong in Zhanqi Residential Community on December 8, 2021. They pressured Ms. Gao to sign the three statements and warned her not to distribute any flyers.

Ms. Zhang Guangbi, in her 70s, lives in Duzhou Sub-district, Changshou District. She was arrested by officers from the Taohua Police Station on November 30, 2021 for talking to people about Falun Gong. Her home was ransacked the next day. Five calendars and some Minghui Weekly publications were confiscated. Ms. Zhang was released on December 1, 2021.

Chen Chongzhong (gender unknown), over 70, lives in Fengcheng Sub-district, Changshou District. Chen was arrested by officers from the Fengshan Police Station in August 2021 and was detained for five days.

Ms. Li Ping from Chaisang District was arrested when she distributed truth-clarifying materials in December 2021. The details are unknown.

Ms. Huang Xiu’e lives in the Shuihuating Residential Community, in Haigang District. She was arrested at home by officers from the Changjiangdao Police Station and the Qinhuangdao Police Department on December 14, 2021, for posting truth-clarifying stickers in her hometown in Mutoudeng town, Qinglong County. She was placed under 15-day detention.

Ms. Zhang Xincha, 68, was arrested and taken to the Shenzhou Police Department on the morning of December 13, 2021. She was taken to the Hengshui Detention Center later that day.

Mr. Liu Haibo, a former accountant of Gaoyuan Company, was placed in criminal detention on November 12, 2021. His family hired a lawyer for him. The arrest was dismissed by the Dongying District Procuratorate in mid-December 2021 for lack of evidence.

Mr. Liu was released on bail pending trial for one year by the Bindong District Police Department on December 16, 2021.

Ms. Han Fengjiao from the Kaifu District was arrested at home by six officers from the Wujialing Police Station on the morning of December 14, 2021. The officers handcuffed Ms. Han and ordered her husband not to move after they entered the house. They ransacked the home without showing a search warrant and videorecorded the process. They confiscated two photos of Falun Gong’s founder, 30 Falun Gong books, a DVD player, a computer, a vacuum machine, four old cell phones, and other belongings. Ms. Han was taken to the police station for interrogation at around noon. She was held for 24 hours and released at noon the next day.

Ms. An Libin from Laiyuan County was arrested by Zhang Fang, a deputy of the Laiyuan Domestic Security Division, on the morning of December 15, 2021, for giving someone a card to bypass the CCP’s Internet blockade. Ms. An was found to have more than 900 yuan in paper bills imprinted with Falun Gong facts, an MP3 audio player, more than ten cards for bypassing the Internet blockade, and two USB drives. She was taken to the Domestic Security Division for interrogation. She was released at around noon that day.

Ms. Wei Cangxiu in her 70s lives alone. Village official Xie Haijun and others went to her home to harass her in September, October, and November 2021. They pressured her to sign a guarantee statement.

They went to Ms. Wei’s home again on December 6, 2021. After finding she was not at home, they called her son and pressured him to cooperate with them and advise his mother to give up practicing Falun Gong. They told him that some people from the city’s Political and Legal Affairs Committee would come.

A large group of people came to Ms. Wei’s home on December 8, 2021. They threatened her and took her to the village office.

Ms. Xu Liru, 75, lives in Hongjia Village, Sanjianbao Town, Lushun City. When she visited an elderly practitioner the family members reported her to police. She was arrested by officers from the Sanjianbao Town Police Station on October 27, 2021. She has since been detained in the Yaojia Prison.

Mr. Shan Yuqi lives in Xigouzi Village, Biguo Town. He was harassed at his workplace by three officers from the Shengquan Police Station in Laishan District, Yantai City at around 9 a.m. on December 16, 2021. After he refused to sign a guarantee statement, the officers put pressure on his workplace leaders to make him sign. They cooperated and fired him from his job.

Ms. Meng Xiangling lives in Jiligou Village, Mamuchi Township, Yinan County. She was arrested at noon on December 17, 2021 for talking to people about Falun Gong in a market.

Two officers, Yu Chenghao and Sun Dawei, from the Guiyunhua Police Station went to Ms. Sha Hui’s home on the afternoon of December 7, 2021. They pressured Ms. Sha to sign a guarantee statement.

When Mr. Wang Changqing was working in Songlin Village, Guangmingshan Town, Zhuanghe City, three plainclothes officers from the Pikou Police Station came and found him on the afternoon of October 19, 2021. They forcibly dragged him from the wall where Mr. Wang was working, injuring his arm. Mr. Wang’s family was informed of his arrest the next day. Mr. Wang is detained in the Pulandian Detention Center. It was recently learned that Mr. Wang will soon be tried online in the detention center.

“Sentenced Three Years Ago, Woman Taken Back Into Custody To Serve Time”