(Minghui.org) Today's news from China includes incidents of persecution that took place in 22 cities or counties in 10 provinces, where at least 48 practitioners were recently persecuted for their belief. 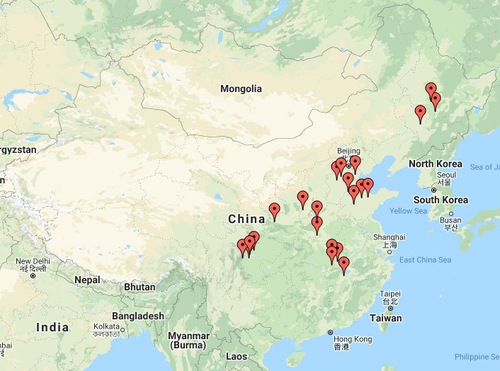 Niu Hong (gender unknown) and Xu Zhaohui (gender unknown) from Yahe District were arrested and their homes were ransacked by officers from the Fangcheng County Police Department and the Zhaohe Police Station on the morning of December 28, 2020. Both practitioners were held in the Fangcheng County Detention Center for 15 days and then transferred to the Nanyang City Detention Center.

Niu returned home on January 3, 2021. Xu remains in custody. It was reported that Xu was tried at the Tanghe County Court on September 5, and was sentenced to three years and six months in prison.

The officers confiscated a number of Falun Dafa books, about 30 printed brochures, about 30 DVDs, a few copies of the Nine Commentaries, USB flash drives, templates for spraying signs, a computer, a printer, a Honda sedan, and several cell phones used for calling people to tell them about Falun Gong and the persecution.

Xu from Fangcheng County, works in Yahe District, and was sentenced in Tanghe County.

Ms. Liu Fenghua and Ms. Li Xiping were reported to the police when they distributed Falun Gong materials on September 20. 2019. They were arrested by officers from the Gegu Police Station, Jinnan District. Ms. Zhu Mei was later reported to the police, was arrested, and her home was ransacked.

Ms. Liu was tried via video link by the Jinnan District on August 25, 2020, when she was held in the detention center. She was released on bail on September 20.

Ms. Zhu was sentenced to two years and six months in prison and fined 30,000 yuan. Ms. Zhu is being held in the Dongli Detention Center.

Officers from the Gaojia Town Police Station in Weibin District and Liu Jike from the town’s judicial office arrested Ms. Yang on November 11, 2021. Ms. Yang was held in administrative detention for 15 days. She returned home on November 26.

On November 25, 2021, Ms. Wang Guaiyan went to the Weibin District Police Department to clarify the truth to Han Baoxiang, who was responsible for persecuting Falun Gong practitioners. The police took her into custody. It is not clear where she is being held.

Officers from the Shaheyuan Police Station knocked on the door at Ms. Xiong Junmei’s home on the evening of December 2, 2021. No one was at home. The officers called Ms. Xiong’s son and asked him where his mother was and when she would return home.

On the morning of December 3, officers called Ms. Xiong’s son and said they wanted to meet with her.

They pressured her to renounce Falun Gong. At first they used financial incentives. When that failed, they pressured her to fingerprint paperwork. They enlisted her family to put pressure on her. Ms. Guo firmly refused to cooperate, and these people had to give up.

Yang Shaoqi and others from the Aoping Town government and two police officers went to Ms. Gu Zucui’s home in the No. 11 Group, Wodian Village, Hongyan Town, on the afternoon of December 1, 2021. Ms. Gu clarified the truth to them, but they did not listen. Instead, five or six people forced her to sign their documents.

Ms. Zhu Xixia from Mingshan Township, Daye City, was harassed repeatedly by officials from the Mingshan Township Political and Legal Affairs Committee and 610 Office. These people also went to other practitioners’ homes and harassed them in recent days.

They threatened the practitioners with blocking their children’s future education and job opportunities, harassed their children in school, and said they would hold brainwashing sessions in Huangshi City.

Ms. Zhou Shuting, 59, from Wumazhuang Village, Xin’an Town, Baodi District, was arrested by four local police officers on the afternoon of December 3, 2021. The officers confiscated a computer from her home.

Ms. Sun Chunhua from Tangcun Village, Jianxi District, was arrested and taken to the Luoyang City Detention Center by officers from the High-tech Zone Police Station at noon on November 26, 2021.

Prior to that, the officers took her non-practitioner son to the police station. They handcuffed and threatened him. He was forced to call his mother and lie to her that he was waiting for her at home. When Ms. Sun went home, the officers arrested her.

Ms. Gong Yanping and another female practitioner were reported to the police for talking to people about Falun Gong on the street on December 3, 2021. They were arrested by officers from the Xunli Police Station. The officers ransacked their homes and confiscated 5,000 yuan in cash.

Pang Jianyou, a residential police officer from Dacheng Police Station in Nangang District, called Ms. Liu Shuqin’s family and harassed them on November 29, 2021. Around 2 p.m., Pang went to Ms. Liu’s home. As soon as he entered, he tried to take a picture of Ms. Liu with his cell phone, which she refused. Then he asked to take a picture together with Ms. Liu, which she also refused. Pang later took a photo of Ms. Liu’s refrigerator, and then asked for her phone number, in case he had to reach out to her.

In addition, Pang and another police officer twice went to Ms. Liu’s home, and twice took pictures of Ms. Liu. Ms. Liu and her family have been harmed mentally and their lives have been disrupted.

Ms. Wang Cuifen, nearly 80, was arrested by plainclothes officers when she talked to people about Falun Gong at the Hejin Aluminum Factory Stadium in mid-November 2021.

Ms. Ma Fengqiong, 77, was intercepted by a man and taken to the Jinfeng Town Police Station while she distributed Falun Gong materials in Jinfeng Town on December 1, 2021. Officers pressured her to sign paperwork, which she refused. Ms. Ma was later released. This was the second time the police confronted her this year.

Ms. Chen Shenggai, 60, and Ms. Wang Huanqing, 63, from Donglianyi Village, Tang County, were arrested by officers from the Gudian Town Police Station in Wangdu County while talking to people about Falun Gong around 9 a.m. on December 3, 2021. Around 2 p.m., the officers took the two practitioners to the hospital for nucleic acid tests. Their current whereabouts are unknown.

In September 2021, officers from the Taihe Town Police Station in Zichuan District broke into the homes of Ms. Zhai Suomei, Ms. Li Xiuying and her husband, and another practitioner with last name Zhang in Taihe Town. Ms. Zhai and Zhang were arrested and their homes were ransacked. Both practitioners were released the day they were arrested. The officers confiscated many Falun Gong books among other personal belongings.

Ms. Li and her husband were holding a wedding for their son that day. Officers from the Taihe Town Police Station went directly to the hotel where the wedding was taking place and threatened to detain the couple for seven days, but they did not succeed at the time.

On November 3, more than twelve people from the Zichuan District Domestic Security Division, the Taihe Town Police Station, and the Taihe Town government broke into the homes of Li Changfa (in Qinjia Village), Li Changxian (in Qinjia Village), Xiao Ziwen (in Luoquanyu Village), and the Du couple (in Luoquanyu Village), Taihe Town, and ransacked the places. They confiscated Falun Gong books, calendars, and audio players. Li Changfa was arrested and taken to the police station, and was released later that day.

It was reported that Ms. Wu Zhiping, 67, was arrested in her home town in Pingxiang City. The specific details are still being verified.

Ms. Wu has been harassed, followed, arrested, imprisoned, and detained, and her home ransacked, many times for her perseverance in practicing Falun Gong and telling people about the persecution. She was sentenced twice for a total of six and a half years. She was subjected to numerous forms of torture in prison, and endured severe physical and psychological abuse.

About a week ago, Ms. Liu Ziying mailed Falun Gong truth clarification printouts to Nanjing. The Nanjing police found the address of her home based on the postmark in Hanyang District, Wuhan City. She was arrested at her home, and many practitioners who were reading the Falun Gong teachings together were also arrested. No further information is available at this time.

Ms. Zhang Shufeng from Jiuxiang Village, Shengcheng Sub-district, clarified the truth about Falun Gong at a farmers market on November 30, 2021. She handed a truth-clarification pamphlet to a plainclothes officer. The officer grabbed her, flashed his police badge, and then called in two other officers. They took her directly to her home and ransacked the place. The officers confiscated all her Falun Gong books, photos of Falun Gong’s founder, and printed materials.

Afterwards, Ms. Zhang was taken to the Wenjia Police Station, where she was interrogated by Cao Jianbo of the Shouguang City Domestic Security Division the entire afternoon. She was released later that day.

Ms. Wei Xiulan and Ms. Liu Guiying were reported to the police for talking to people about Falun Gong on December 2, 2021. SWAT Team officers led by Cheng Shengli, head of the 610 Office, arrived in two special police vehicles and arrested both practitioners. The officers first took the two practitioners to the Shihaoqiao Police Station, where Yin Jun, head of the district Domestic Security Division, and others were waiting. It is believed that afterwards the practitioners were taken to a detention center.

Ms. Cheng Guifeng, 80, a retired employee of the Tailong Group Co. Ltd., was followed by plainclothes officers while distributing New Year’s calendars. She was arrested and taken to the Zhoudian Police Station in Daiyue District on the afternoon of October 22, 2021.

Then, the officers called Ms. Cheng’s daughter, ransacked their home, confiscated about 130 New Year’s calendars, more than 200 desk calendar stands, and a punch machine. The following day, the officers said that the procedure had not been completed, and asked Ms. Cheng and her son to go to the police station to finish processing her case. The officers asked her son to be her guarantor before she was allowed to go home.

On November 23, five people went to Ms. Cheng’s home to harass her.

On November 22, the group went to the home of Ms. Teng Yuanlan, who lives in the same residential community. Ms. Teng is also a retired employee of the Tailong Group.

Mr. Li Zhiyong received a call from a person in the Xiaodongguan Community on the morning of December 2, 2021, asking him to go the community office and sign a letter. The person said the order came from their superiors.

A group of officers broke into Ms. Zeng Fanfeng’s home and ransacked the place on the afternoon of November 30, 2021. They confiscated a printer, a computer, and some Falun Gong materials. Ms. Zeng is being held in the Pengzhou City Detention Center.

Ms. Wei Jincai, Dang, and Aiping from Xiong County were arrested while talking to people about Falun Gong in Baigou Town, around 11 a.m. on December 2, 2021. Police assistants and plainclothes officers took the three practitioners to the Baigouxincheng Police Department.

Ms. Shi Lianying is 81 years old. In the past few days, officers from the Shanghewan Police Station in Jiutai District went to Ms. Shi’s home every day. Ms. Shi did not feel well due to the constant harassment. The officers searched her home and found copies of the Nine Commentaries and desktop calendars.

“France: A Teacher Introduces Falun Gong to Her High School”

“I Experienced Firsthand: “You Put in the Effort and Your Teacher Will Handle the Rest””