(Minghui.org) Falun Dafa practitioners in Taichung held activities at the city hall square on December 12, 2021, to wish the founder Mr. Li Hongzhi, a Happy New Year. They did the exercises, clarified the truth to passersby, and collected signatures on a petition to end the persecution. 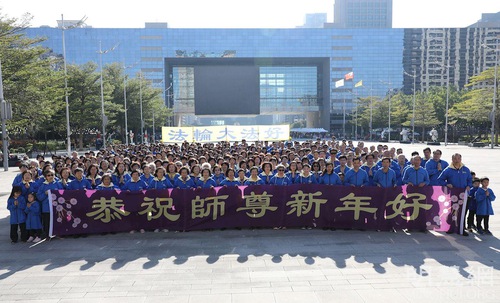 Located in western, central Taiwan, Taichung is the second most populous city on the island. Impressed by the large-scale group exercises many passersby stopped and asked for information. Some learned the exercises and signed the petition. 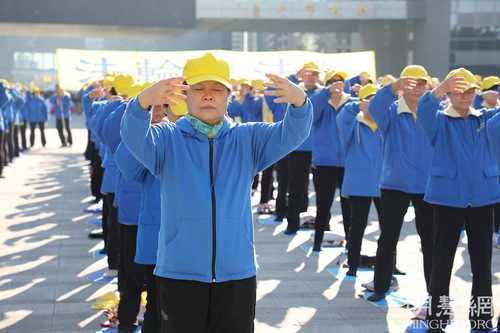 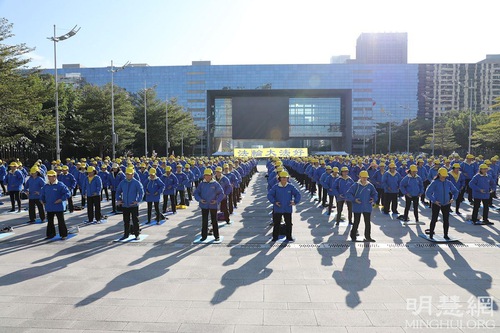 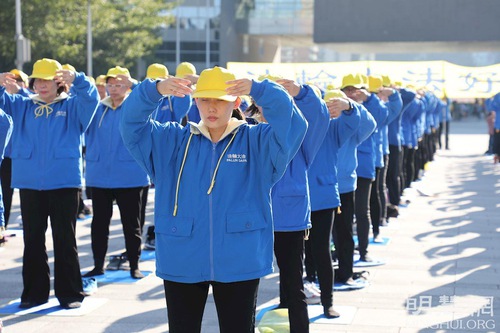 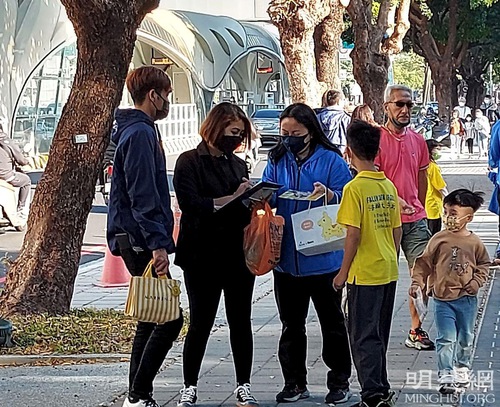 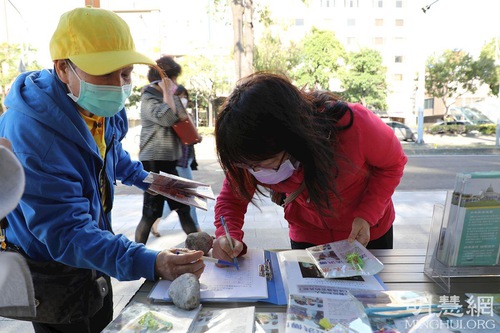 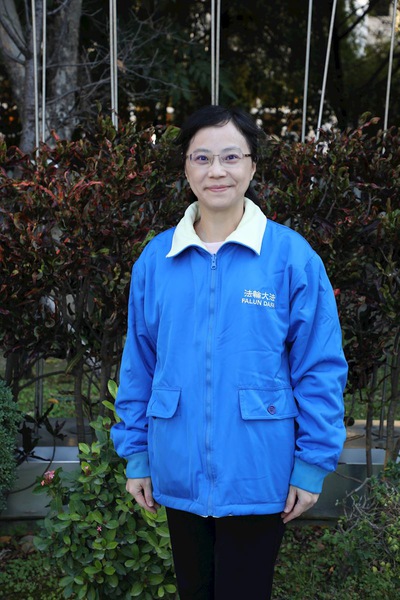 Yu Qing, professor of chemical engineering, started to practice Falun Dafa 19 years ago. “The principles of Truthfulness-Compassion-Forbearance described in Falun Dafa’s books gave me a deeper insight as to how to be a good person,” she explained, “I learned where I came from and where life will lead to.”

“This includes aligning with the principles (Truth-Compassion-Forbearance) in daily life,” she added. She said this made her more open-minded while paying attention to rectifying her impure thoughts. While letting go of selfishness, competing, and other bad thoughts, she was able to be more considerate of others.

Professor Yu said the changes were phenomenal. Falun Dafa allows her to focus more on work without worrying about personal gain or loss. This led to wisdom and better performance at work. After she began practicing, not only do her coworkers like to talk to her, her students and her own child also find her more patient and approachable.

“Why is my life so hard?” Ms. Chen Lihui frequently asked this question—she had to raise two children alone. Facing her husband’s betrayal and family abuse, her only choice was divorce. But her physical pain was equally devastating: she injured her spine while escaping a fire which made it hard for her to stand, migraine headaches bothered her for 40 years, and thalassemia (an inherited blood disorder) caused dizziness. But all this was resolved thanks to Falun Dafa. 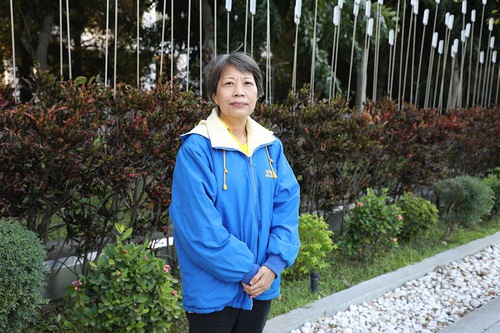 In 2008 her older sister invited Ms. Chen to attend a Falun Dafa Experience Sharing Conference. Out of curiosity, she also joined the large character-formation event. During the conference she could see Falun rotating with her third eye and felt a strong energy field. In the next few days she often heard someone saying, “Falun Dafa is good. Truthfulness-Compassion-Forbearance is good. Why not practice it?” Her sister also encouraged her and helped her find a nearby group exercise location.

Because of poor health, Ms. Chen was bedridden most of the time. But three months after she began practicing she was able to stand up. Through studying Falun Dafa’s teachings, she learned the difficulties people experience in life are not accidental. They are related to karma created in the past. The only solution is cultivation and being a good person. As a result, she was able to treat her ex-husband and his wife well, and allow them to attend her son’s wedding. “My son and daughter-in-law are very nice to me, and we are all very happy,” Ms. Chen said.

She also experienced at least three tests of life and death. “But Master Li helped me every time. That is why I feel so fortunate to be a Falun Dafa practitioner and I want to tell others how wonderful Dafa is,” she said.

Ms. Li started to practice Falun Dafa 9 years ago. Before that, she had hepatitis B which caused her to sleep more than 10 hours a night but still feel tired. Due to problems with her vocal chords, she could hardly talk—so most people considered her a handicapped person. Although doctors recommended surgery, the success rate was only 50%. Because of their financial situation her family could not afford it.

When her situation seemed hopeless, her husband found the Falun Dafa website on the Internet. He suggested they both try it.

Ms. Li participated in group exercises every morning. One month later, she was suddenly able to speak and her other illnesses also disappeared. “It was like a miracle!” she said. Now, she can work over 10 hours a day but only needs to sleep less than 5 hours. She is much more energetic than before.

Ms. Li follows the principles of Truthfulness-Compassion-Forbearance. At her work she voluntarily does things the others are unwilling to do. “By your behavior I know that Falun Dafa must be good,” one coworker told her.

The changes in her husband were also dramatic. In the past, he smoked, drank, gambled and had a bad temper. “The first time he did the exercises he told me he would not drink again and he actually stopped. Our neighbors were all impressed,” Ms. Li said. 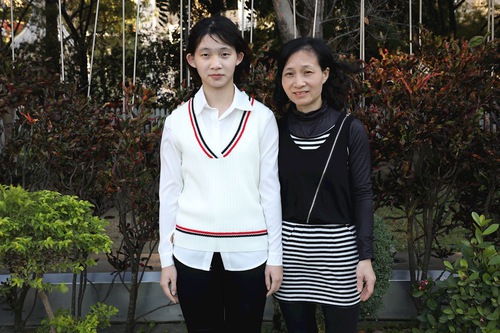 Ms. Li and her daughter Alizee

Her daughter Alizee is a high school student. Since childhood, she had atopic dermatitis and allergies, so she frequently went to hospital for treatment. Shortly after joining her parents in practicing Falun Dafa, her health improved significantly. She said that Falun Dafa taught her a new way of looking at things. She is no longer stressed and is able to get along with others. She also became one of the top students in the classroom. “I want to thank Falun Dafa for all this!” she said.

Ms. Xie Xingjun heard about Falun Dafa from her daughter. “She was an elementary school student and joined the Falun Dafa club in school,” she recalled, “When I saw her doing the exercises so calm, pure, and solemn, I knew this practice is extraordinary.”

As a mother of four children, Ms. Xie was constantly struggling between family and work, which made her exhausted almost all the time. Even when she walked up stairs, she was fatigued and out of breath. All these contributed to her hot temper. “I felt lost—like I was sinking in the sea. Master Li saved me,” she said. 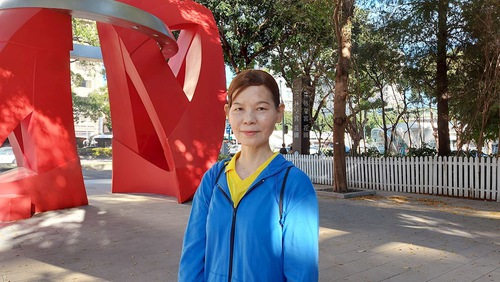 Ms. Xie says the teachings of Falun Dafa are very profound. They helped her to negate bad thoughts and improve her character. For example, when she had a different opinion from her husband in the past, she would speak louder and be tough. “Since Master told us to be compassionate, I learned to consider things from my husband’s angle – what kind of challenges he’s facing and how I could help him. With a mindset of thankfulness and respect, I found the situation entirely changed,” she explained.

Her family members also noticed her positive changes. During a family gathering, her cousin said, “Your complexion is so good!” Upon hearing it was due to Falun Dafa, the cousin – as well as her husband – also began to practice. “The couple is now happier than ever,” Ms. Xie said.

Ms. Lu was invited to the event by her friend. “I have known him for about 10 years. I can tell Falun Dafa has made him more open-minded and more tolerant,” she explained, “It is not like he is trying to be a better person on the surface. Instead, it is a real change from within.” 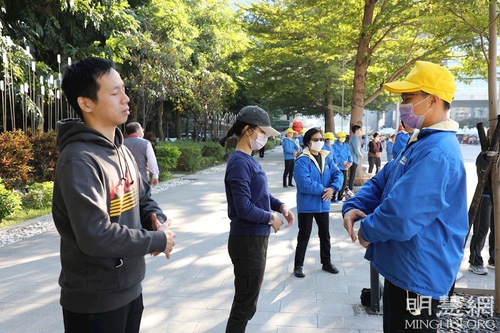 That is why she was happy to participate in the event and learn the exercises. “By helping people achieve good health and mindset, Falun Dafa is indeed great,” she said, “In China, the Chinese Communist Party is suppressing this group badly and even sells practitioners’ organs for profit. It is awful and we need to stop it.”

“Discovering the Joy of Being Truly Considerate of Others”