(Minghui.org) The 2021 Falun Dafa Experience Conference in Taiwan took place on December 19, 2021, at the Taipei Heping Basketball Gym. Practitioners cherished the annual event because it motivated everyone to learn from each other and improve in cultivation. After listening to the speakers, practitioners were impressed by how others persistently removed their attachments with the help of Master Li’s (Falun Dafa’s founder) immense grace. They became motivated to push themselves to work harder in their cultivation and save more people to fulfill their prehistoric vows as Falun Dafa practitioners.

Before the sharing session started, the more than 6000 practitioners in attendance stood together with their hands conjoined in front of their chests and wished Master Li Hongzhi a Happy New Year! 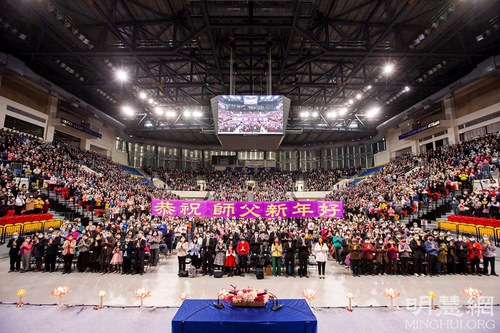 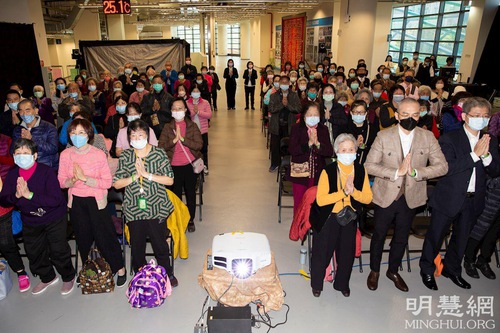 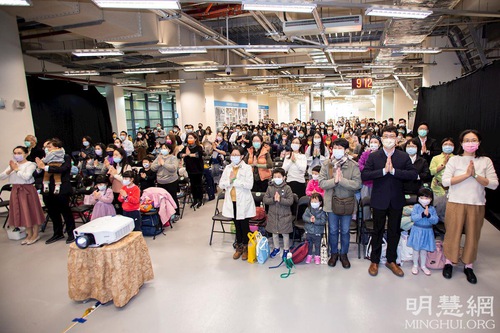 More than 6000 practitioners stand with their hands conjoined in front of their chests to wish Master Li Hongzhi a Happy New Year!

Nineteen practitioners spoke at the conference and explained how they have followed the principles of Truthfulness, Compassion, Forbearance in their lives to improve their character and clarify the truth. While listening to their stories, one practitioner shed tears, while many others were inspired. 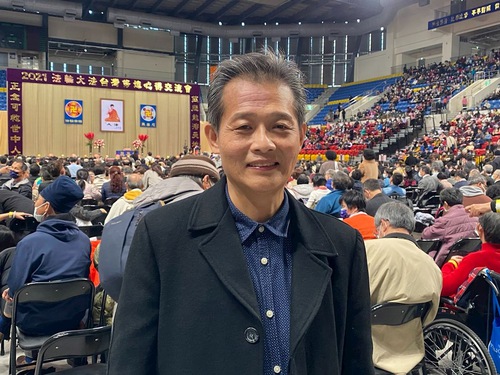 Mr. Guan Jianzhong thanks Master and other practitioners

Mr. Guan Jianzhong, a tobacco pipe designer, has practiced Falun Dafa for more than two decades. He attends the conference every year and always has different thoughts afterward. This year he believed that practitioners no longer look at how things appear on the surface and instead search within for their problems. He also felt that practitioners no longer focused on who was right and who was wrong, but they focused on which attachment they hadn’t eliminated. He saw practitioners’ compassion and how they have stopped complaining. He said that he had a lot of areas to improve.

A female practitioner had shared that she had a bad temper and often fought with others. She wanted to become compassionate, but no matter how she tried she failed. Just when she was convinced that she couldn’t do it, she decided to try again and made a wish. Master pushed her forward. This story surprised Mr. Guan as he knew that it wasn’t easy for a person in her 50s to change her temper. He knew that the energy she had cultivated had removed the matter that had caused her to have an ill temper and now her life has improved fundamentally. “In Falun Dafa cultivation, such miracles often appear in the practitioners’ lives,” he said. 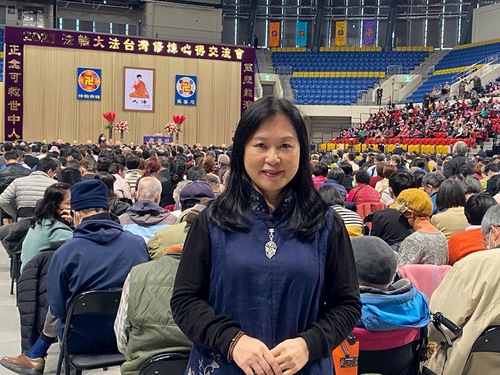 Ms. Li Kaixin, from the outlying island of Penghu, became a practitioner in 1999. The tea ceremony instructor paid special attention to digging out her attachments. The story of how a practitioner managed to remember Falun Dafa's teachings in difficult moments to find and eliminate his attachments moved her. She learned a lot from the story. 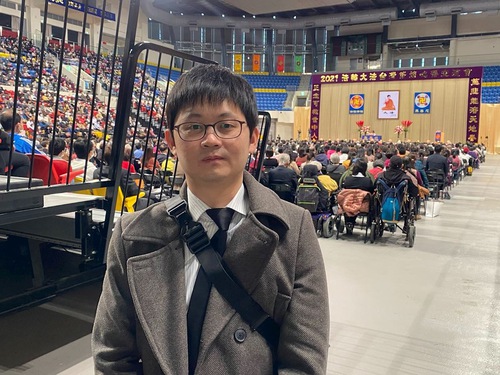 Mr. Huang Liren feels the power of Falun Dafa after seeing the dramatic change of a practitioner’s temper

A former programmer and now a merchant, Mr. Huang Liren took up Falun Dafa nine years ago. He didn’t have the time recently to study the teachings regularly and so he was often short-tempered and snapped at others. Other practitioners had pointed out to him that he couldn’t take advice well, was impatient, and felt jealous hearing about good things that had happened to others. He knew that he was handling many things poorly and that he lacked patience.

A practitioner shared at the conference how she had eliminated her bad temper and impatience. Mr. Huang had worked with her a few years ago on a truth-clarification project. She had always finished her work quickly and would order others to do things the way she wanted because she had seniority. When he heard her speaking slowly with kindness in her eyes, he was surprised at how much she had changed. He thought that she had almost become an entirely different person. 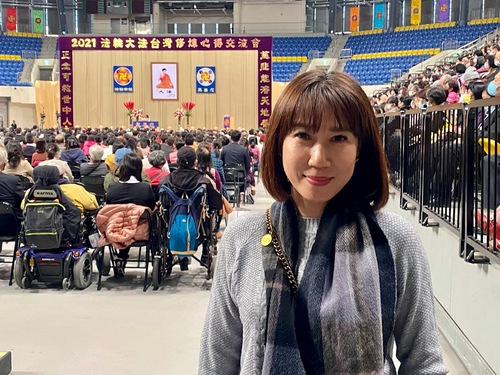 Ms. Hong Sulian encouraged herself to improve vigorously after listening to a little practitioner’s story.

Ms. Hong Sulian is an insurance sales manager and the head of a Rotary Club. The energy at the Fa conference made her feel calm and joyful. The sharing of a little practitioner especially touched her. Most children who are so young don’t know what they want to do in the future and can barely read. The little practitioner could read the book Zhuan Falun on her own, and this impressed Ms. Hong. She also felt embarrassed that she hadn’t progressed as well and was determined to work harder in her future cultivation. 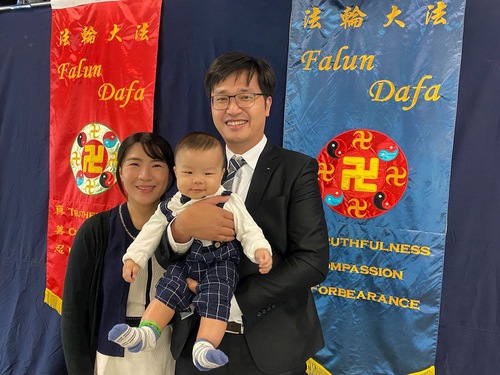 Mr. and Mrs. Ye, in the process of raising their son, have learned not to focus on other practitioners’ shortcomings.

Mr. and Mrs. Ye came to the conference with their seven-month-old son. Stories of how other practitioners have improved themselves amid conflicts and behaved like cultivators in every aspect of their lives resonated with the couple.

The couple became practitioners in 2008 and 2012. They met each other in the U.S. at an experience-sharing conference and later married. Their seven-month-old son was a little practitioner in their eyes. The little one will stop crying when they sing him songs from the Falun Dafa Tian Guo Marching Band; he will smile when they say “Falun Dafa is good, Truthfulness, Compassion, Forbearance is good.”

“I became a practitioner before I became a father. Taking care of my son feels more like taking care of a little practitioner. I know that I came here to complete the mission of saving people. My son has a mission and a path arranged for him. Being a parent is doing my best to work with the arrangement,” Mr. Ye said.

“When I come across a practitioner in a truth-clarification project, I will see his shortcomings if I haven’t cultivated well. Now I regard raising my son as a project, and my son can’t do things independently since he can’t take care of his basic needs. I know that I must expand my capacity to help him go from incapable to capable so that he can save people in the project that is arranged for him later. In the projects I did in the past, I realized that other practitioners were all capable, but I often saw their shortcomings and exaggerated them. This way I negated the practitioners’ significance. If I saw my son as a practitioner who knew nothing and couldn’t keep himself alive, I am exaggerating his shortcomings, as I did with other practitioners’ shortcomings. I forgot to see the positive sides of them,” he said. 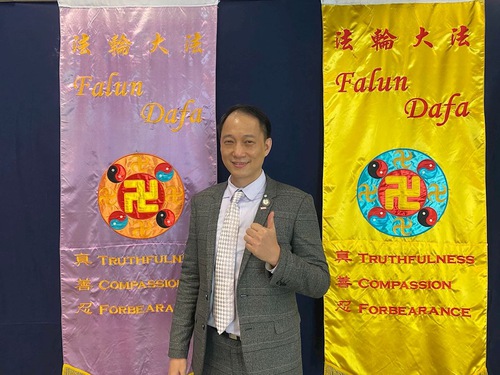 Mr. Wu Dashu was an education consultant, the founder of Sea Biscuit Club, and CEO of BNI Tainan Branch. He learned about Falun Dafa in 1999 and didn’t start practicing it until 2012. He came across a few twists and turns before he made it to the conference. He became more determined to come because he knew that these difficulties were tests for him. He wasn’t disappointed as he learned a lot during the conference.

He talked to a practitioner who shared that she used to have a terrible temper. He couldn’t imagine her being that way, because like she said in her story she had become a different person. She would put herself in others’ shoes before she opened her mouth and would always forgive others.

The sharing that Mr. Wu was most impressed by came from a practitioner who worked in a media project. “Most people didn’t study the Fa every day because they were busy. The practitioner joined a Fa study group twice a week. The rest of the week he’d memorize the Fa. This inspired me because I joined a Fa study group twice a week too. If I could study or even memorize the Fa every day, it would have significantly improved my cultivation,” Mr. Wu said. 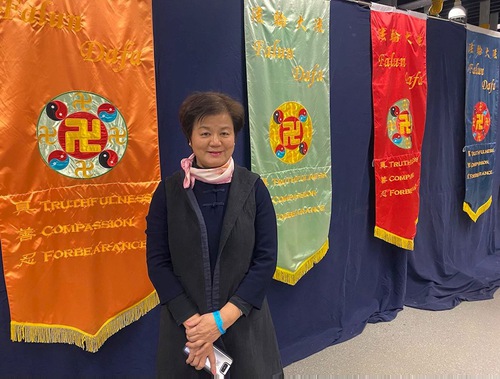 Ms. Wu Biyan joined NTD Television and realizes that she needs to take on more responsibility.

Ms. Wu Biyan just retired from the financial business field and joined NTD Television. She became a practitioner in 2005. From the sharings at the conference, Ms. Wu realized that many practitioners are actively taking part in various projects. The way a young practitioner improved himself over and over again and had faith in the Fa touched her. She cried several times while listening to a practitioner who had polio.

Looking at herself, Ms. Wu said, “I joined NTD Television but slacked off because of the other work I did. A practitioner said that he always studied the Fa every day before he worked on his project. This way he ensured that he didn’t skip it when the workload increased. I had a busy schedule and was a coordinator at an exercise site. I tried to quit being the coordinator and focus solely on NTD TV. A practitioner shared that he not only took charge of multiple projects, he never shied away from shouldering responsibility. His story touched me and woke me up. Sometimes I give myself too many excuses. I need to expand my capacity and take on more responsibilities. I must become more diligent in cultivation.”

“Thirteen Jilin Residents’ Appeals Against Wrongful Sentences Rejected, One of Them in a Coma in Critical Condition”