Home > Karma & Virtue > Voices of Support Worldwide
Toronto, Canada: Professors and Elected Officials Express Support for Local Student and Call for Release of Her Mother Being Detained in China for Her Faith
Dec. 22, 2021 | By Minghui correspondent Zhang Yun in Toronto

(Minghui.org) Ms. Liu Mingyuan, a computer animation student at Sheridan College in Toronto, is calling for the immediate release of her mother, who is detained in China for her faith in Falun Gong. Her mother, Ms. Liu Yan, was arrested in Kunming City, Yunnan Province on September 30 for practicing Falun Gong, a spiritual discipline that has been persecuted by the Chinese Communist Party (CCP) since 1999.

Earlier this month, two of her professors took the initiative to send letters and e-mails to express their concern. Some Members of Parliament (MP) and mayors also expressed their concern by writing letters or emails. They called on the international community to pay attention to Liu Yan’s situation and ask the CCP to release her unconditionally

Professor Kristian Howald of Sheridan College sent an email to MP Nathaniel Erskine of his electoral district on December 15, 2021.

In his email, Professor Howald expressed his concern and stated that Ms. Liu’s mother is being unreasonably detained. He said her mother’s faith group is socially disadvantaged. The Globe and Mail recently reported on her story. Professor Howard also attached a link to the media report. 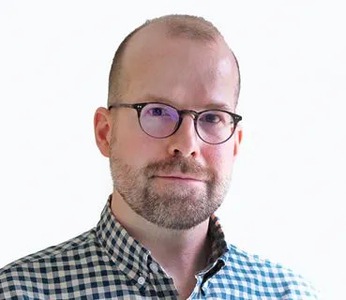 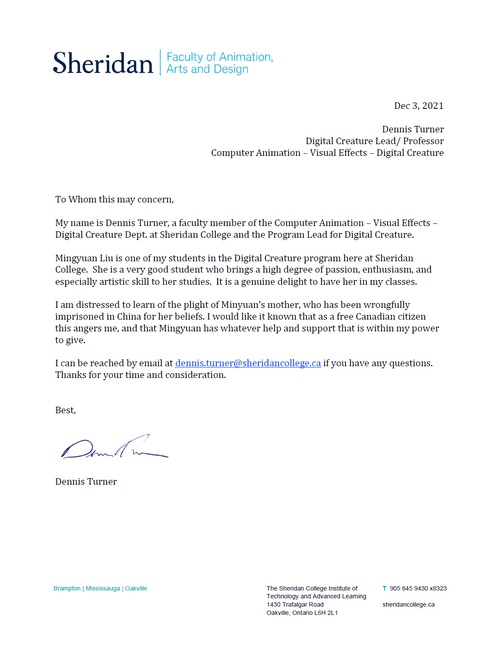 On December 3, Prof. Dennis Turner of the Department of Animation, Arts & Design at Sheridan College wrote an open letter for his student Liu Mingyuan.

He stated in the letter, “I am distressed to learn of the plight of Mingyuan’s mother, who has been wrongfully imprisoned in China for her beliefs. I would like it known that as a free Canadian citizen this angers me, and that Mingyuan has whatever help and support that is within my power to give.” 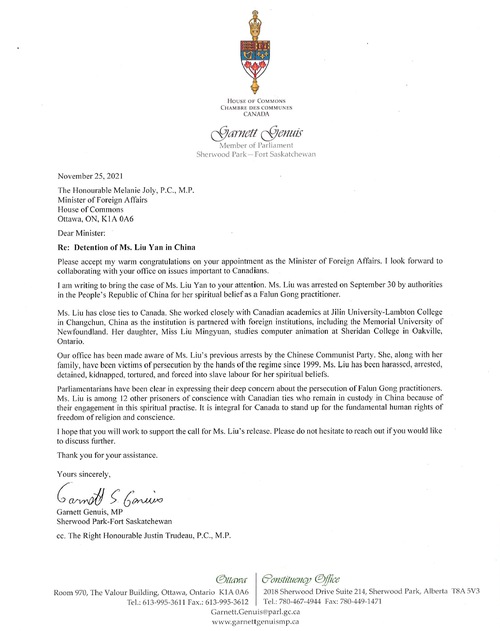 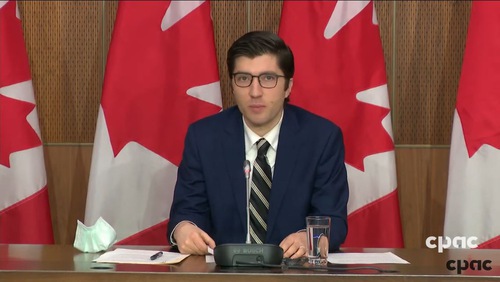 MP Garnett Genuis wrote to the Minister of Foreign Affairs about the detention of Ms. Liu in China.

He stated in the letter, “Ms. Liu has close ties to Canada. She worked closely with Canadian academics at Jilin University-Lambton College in Changchun, China as the institution is partnered with foreign institutions, including the Memorial University of Newfoundland. Her daughter, Miss Liu Minhyuan, studies computer animation at Sheridan College in Oakville, Ontario.”

“Our office has been made aware of Ms. Liu’s previous arrests by the Chinese Communist Party. She, along with her family, have been victims of persecution by the hands of the regime since 1999. Ms. Liu has been harassed, arrested, detained, kidnapped, tortured, and forced into slave labour for her spiritual beliefs.

“Parliamentarians have been clear in expressing their deep concern about the persecution of Falun Gong practitioners. Ms. Liu is among 12 other prisoners of conscience with Canadian ties who remain in custody in China because of their engagement in this spiritual practice. It is integral for Canada to stand up for the fundamental human rights of freedom of religion and conscience.

“I hope you will work to support the call for Ms. Liu’s release.” 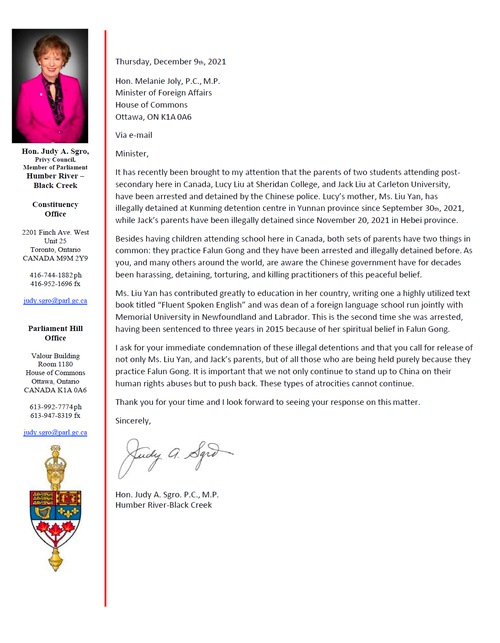 MP Judy Sgro wrote to Foreign Minister on December 9, “I ask for your immediate condemnation of these illegal detentions and that you call for the release of not only Ms. Liu Yan, and Jack’s parents, but of all those who are being held purely because they practice Falun Gong. It is important that we not only continue to stand up to China on their human rights abuses but to push back. These types of atrocities cannot continue.” 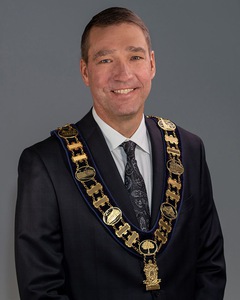 Mayor John Taylor of the Town of Newmarket

Mayor John Taylor of the Town of Newmarket wrote that he read the article about Ms. Liu’s detention in the Globe and Mail one morning two days before. He stated his support for her daughter, Liu Mingyuan. 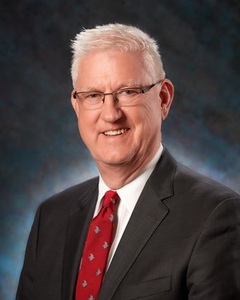 Councilor Paul Sharman of Burlington City wrote to Mingyuan that he knew about the persecution of Falun Gong and he was deeply saddened for her, her family and all Falun Gong practitioners. 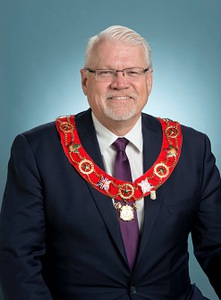 Mayor Sandy Brown of the Town of Orangeville

Mayor Sandy Brown of the Town of Orangeville wrote to Mingyuan that he was sorry to know her family was hurt, “In Canada, we believe in religious freedom. I certainly support your efforts to release your family.”

Background: What is Falun Gong and Why is the CCP Persecuting It?

Falun Gong (also known as Falun Dafa) was first introduced to the public by Mr. Li Hongzhi in Changchun, China in 1992. The spiritual discipline is now practiced in over 100 countries and regions worldwide. Millions of people who have embraced the teachings, which are based on the principles of Truthfulness, Compassion, and Forbearance, and learned the five gentle exercises, have experienced uplifted health and well-being.

“Targeted in a Police Sweep, Hunan Woman Sentenced to Four Years for Her Faith”

“Being Rational and Calm – Not Affected by World Affairs”