(Minghui.org) Falun Dafa practitioners held three events near the famous Acropolis in Athens on December 5, 10 and 12 to mark Human Rights Day. They exposed the Chinese Communist Party’s (CCP) persecution of Falun Dafa and organ harvesting from practitioners while they are still alive. They called on people to learn the truth and help stop the persecution.

Athens, the capital of Greece, is one of the oldest cities in the world with a recorded history of more than 3,000 years. It is the economic, financial, industrial, political and cultural center of Greece. Athens is known as the cradle of Western civilization.

From the fifth to the fourth centuries BC, Athens had a significant cultural and political influence on European and world culture. Later, due to plague and war, the Athenian civilization disappeared, and only some historic relics and works of art remain. The Parthenon Temple of the goddess Athena in the Acropolis is a symbol of Western culture. 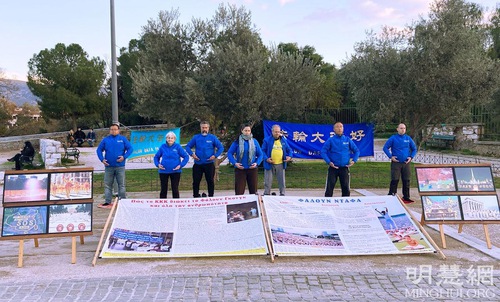 Practitioners demonstrated the Falun Dafa exercises on a busy street near the Acropolis on December 10. Display boards contained information exposing the CCP’s persecution.

December 10 is Human Rights Day. Despite the cold and windy weather practitioners demonstrated the exercises and exposed the CCP’s persecution. Their activities drew much attention.

George is interested in traditional Chinese culture and said he practiced Chinese martial art and knows some concepts of Taoism and Buddhism. He was fascinated by the Falun Dafa exercises and practitioners showed him the movements.

He said, “I tried it, and I know you are good.” He pointed to the flyer and said, “I also know that the CCP continues to persecute Falun Dafa.” His friend John said that the Communist Party cannot tolerate different voices and cited various crimes committed by the Party worldwide.

When a practitioner mentioned the CCP’s destruction of traditional Chinese culture. George said that as a Greek, he felt the same, and believed that cultural loss and lack of faith were the reasons for the decline in society’s morals.

George and John sent their best wishes to Falun Dafa practitioners and hope that the persecution by the CCP will stop as soon as possible. 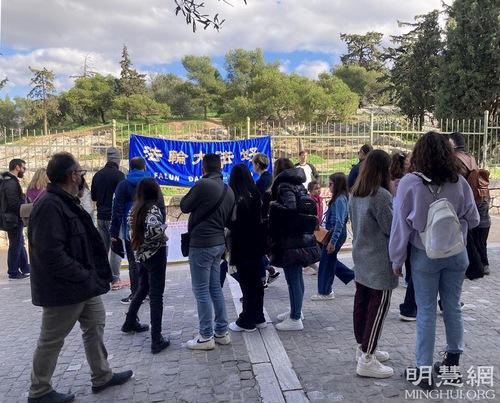 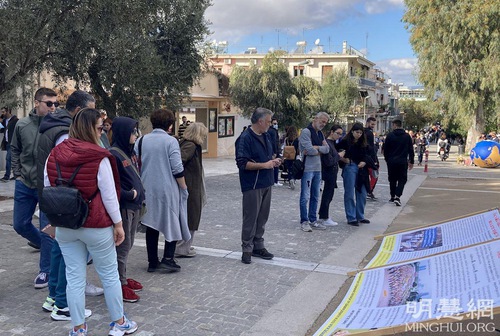 On December 5, 2021, Falun Dafa practitioners clarify the truth on the street beside the Acropolis hill in Athens. Many people stopped to watched the Falun Gong information display boards. 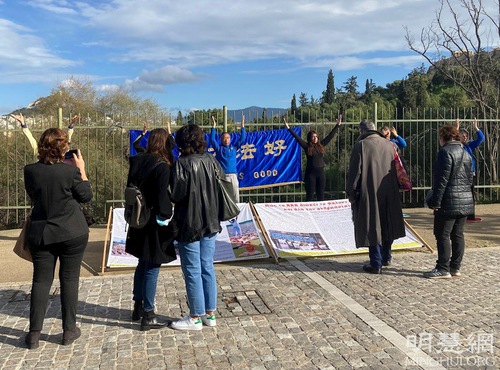 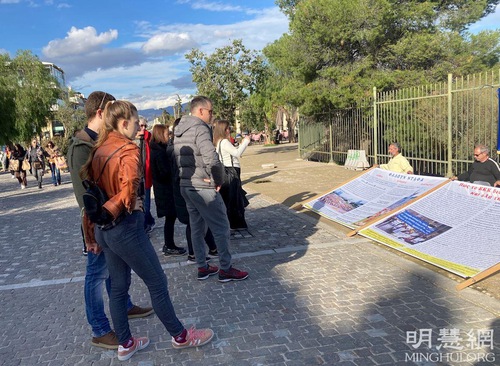 On December 12, 2021, practitioners demonstrated the exercises near the foot of the Acropolis in Athens. People stopped to watch and take photos.

The weather was sunny on December 5 and 12, and an endless stream of people passed the foot of the Acropolis Mountain. Practitioners’ serene music and exercise movements drew crowds of onlookers. Some took photos of the exhibition boards after reading them.

One man was in a hurry but noticed the banner with words “Falun Dafa is good” and stopped to ask a practitioner, “I know what happened to you and I am sympathetic. Do you need donations or other help?”

The practitioner said, “Thank you, but we do not collect donations. If you want to support us, please sign on the website to oppose the CCP’s persecution of Falun Gong.” The man happily agreed, and left. 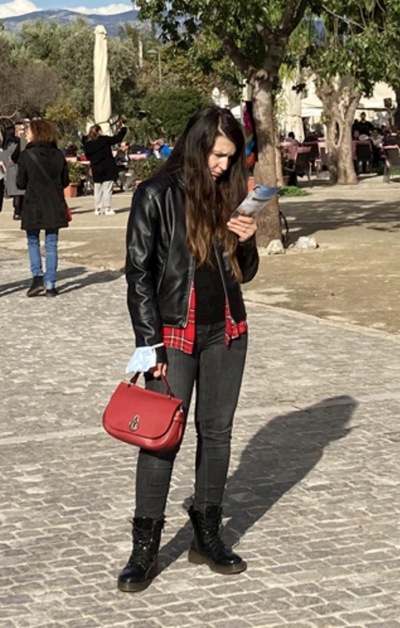 After reading the leaflet which describes the CCP’s persecution of Falun Dafa, Jane asked, “Did all of this really happen?” A practitioner explained that the persecution really happened and is still going on.

Jane said, “I don't understand why it (the CCP) does this, because Falun Dafa has nothing to do with politics.”

A practitioner explained, “The CCP preaches atheism and maintains its rule with violence and lies. The CCP is afraid of different beliefs and is incompatible with Truthfulness-Compassion-Forbearance, the fundamental principles of Falun Dafa. Since 1999, the CCP has used its entire state mechanism to brutally persecute practitioners.”

Jane said she understood. She asked if there was a website because she wanted to have a more in-depth understanding.