(Minghui.org) The ANZ Alliance for Victims of the Chinese Communist Regime held a rally outside the Chinese Consulate in Sydney, Australia, on December 10, 2021 to commemorate the 73rd International Human Rights Day.

Representatives of the organization urged China’s communist regime to stop its continuous, escalating persecution of innocent people and release all imprisoned prisoners of conscience in accordance to the international human rights conventions. Falun Gong practitioners attended the rally upon invitation.

Falun Gong Practitioners Should Have the Right of Belief 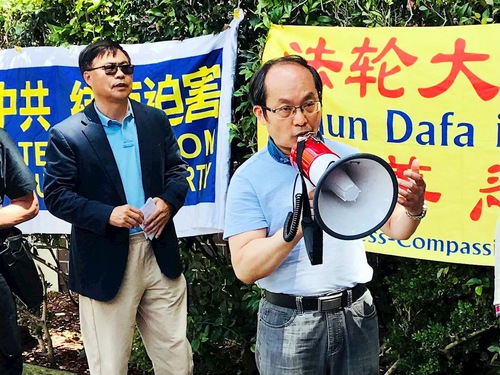 Professor Feng Chongyi, Chairman of the ANZ Alliance for Victims of the Chinese Communist Regime and Associate Professor in China studies in Sydney’s University of Technology, spoke at the rally.

Professor Feng Chongyi, Chairman of the ANZ Alliance for Victims of the Chinese Communist Regime and Associate Professor in China studies at the University of Technology Sydney spoke at the rally and accepted an interview with a Minghui correspondent.

He said, “Today is the anniversary of the Universal Declaration of Human Rights. Falun Gong practitioners are entitled to enjoy their inalienable rights of freedom of religion, freedom of belief, and freedom of association. This is their sacred right. But it has been taken away by the Chinese communist regime. So they are the victims of this regime. That is why for all these years I have supported Falun Gong practitioners to fight for their inalienable rights.

“In 2017, the Australian government passed the Foreign Influence Transparency Scheme. That was the beginning of democratic push-back against the Chinese regime’s infiltration in Australia. And now Australia has passed this new Magnitsky law.

“Despite all the economic connections with China, Australia has now decided to stand up for human rights principles to support all those victims in their fight against the CCP regime.

“Falun Gong has achieved a lot. Now if we look at the world, the entire international community has awakened to understand the evil of the CCP regime.”

Professor Feng has publicly supported Falun Gong in resisting the persecution on many occasions. He thinks Falun Gong is helping the international society wake up and see the evil nature of the CCP.

“Since 1999 Falun Gong has made every effort to educate the world, to show the world how evil the CCP regime is. After more than two decades, the world can finally understand the truth told by Falun Gong. It is a quite a great achievement for Falun Gong,” he said. 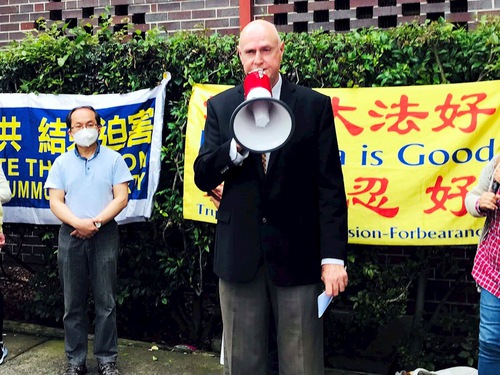 John Deller, spokesperson for the Falun Dafa Association in Australia, spoke at the rally.

John Deller, spokesperson for the Falun Dafa Association in Australia, said in his speech at the rally: “December 10 marks Human Rights Day, commemorating the day in 1948 the U.N. General Assembly adopted the Universal Declaration of Human Rights (UDHR).”

Mr. Deller said that for 22 years, adherents of Falun Dafa have helped people learn about the ancient mind-body practice and to see the evil nature of the CCP.

“It was in this window that Falun Gong, also called Falun Dafa, was first taught publicly in China in 1992 by Mr Li Hongzhi, and it was registered with the government’s China Qigong Research Association.

“Falun Gong is a spiritual practice in the Buddhist tradition that consists of gentle, meditative exercises and moral teachings centred on the tenets of truthfulness, compassion, and forbearance. In keeping with traditional Chinese culture, it teaches personal responsibility for one’s actions and ethical choices in life.

“In 1998, the CCP’s own survey found that Falun Gong was practiced by over 70 million people in China, improving their health and saving the government millions of yuan each year,” he said.

“However, in July, 1999, the CCP began its violent campaign to eradicate Falun Gong, which continues today.”

“December 10 is a day to reflect on what the world has become and what the world can be. You don’t have to hold a particular religious or cultural belief to acknowledge that human beings have a sacred right to life.

“The CCP is most afraid that its crimes and the corrupt foundation of its illegal rule will be exposed. Falun Gong practitioners are helping people understand the CCP’s evil nature. It is worth celebrating that the Australia government is now resolving this issue and has passed the Magnitsky Act to sanction perpetrators of human rights violations in the communist regime.”