(Minghui.org) In advance of International Human Rights Day, the Police Headquarters in Jakarta, the capital of Indonesia, held a speech contest on December 2, 2021. Many representatives from different organizations, communities and universities participated in the event, including scholars, human rights activists and police officials. A number of TV stations and online media outlets were present and reported on the day’s activities.

Falun Dafa practitioners’ waist drum team was invited to perform during the opening ceremony. The accompanying music was “Falun Dafa Is Good.” 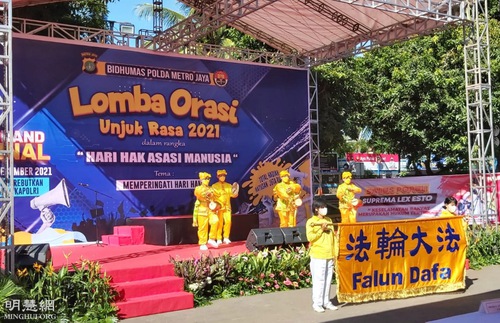 The Falun Dafa waist drum team was invited to participate in the opening ceremony of the Human Rights Day event hosted by the Jakarta Police Headquarters on December 2, 2021.

The waist drum team coordinator introduced Falun Dafa to the audience and told how the Chinese Communist Party (CCP) has persecuted the spiritual practice, as well as other Chinese citizens and destroyed China’s traditional culture.

At the end of the presentation, a practitioner called for an immediate end to the CCP’s persecution of Falun Dafa practitioners and other prisoners of conscience in China, and for an end to the communist regime’s crimes against humanity.

Minghui.org has confirmed the deaths of thousands of practitioners as a result of the persecution over the past 22 years, but due to the regime’s information blockade, the actual number is believed to be much higher. Many more have been imprisoned and tortured for their faith.