(Minghui.org) Dr. Hwang Duhwan has 40 years of experience in medicine and currently works as the President of the Hwangduhwan Internal Medicine Clinic in Ulsan City, South Korea. At 76 years old he still enjoys hiking, golfing, singing, and art. If there is one thing that he regrets it’s that, “It took me so long to find and practice Falun Dafa!”

Dr. Hwang says that after he began practicing Dafa he rarely feels tired. “I have never felt such energy before!” he said. 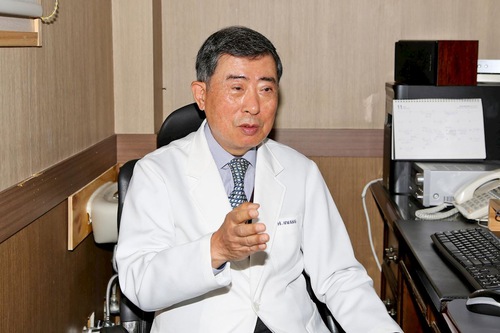 Dr. Hwang Duhwan, an internal medicine specialist for 40 years, says that practicing Falun Dafa allowed him to find his true self.

A Special Book Sat on the Shelf for Five Years

Dr. Hwang noticed a book on his shelf in April 2018. It was a copy of Zhuan Falun, the main teachings of Falun Dafa. Five years before, a member of his hiking club who practices Falun Dafa had given him the book, but Dr. Hwang never had time to read it. As soon as he began reading, he thought, “Zhuan Falun is no ordinary book!”

He decided to learn the Falun Dafa exercises. Because he had very little free time, a practitioner went to his office every day at lunchtime to show him the exercise movements. He quickly learned them. As soon as he finished doing the exercises each day, he felt warm and his fatigue disappeared. Seeing patients in the afternoon became easy.

A few months later he attended a Falun Dafa Nine-Day Workshop. He canceled all of his scheduled events and didn’t miss a class. He made up his mind to become a genuine Falun Dafa practitioner.

Two months into the practice, Dr. Hwang went to a Falun Dafa experience sharing conference in Taiwan. He barely rested and resumed his busy schedule after he returned to South Korea. He said he felt an energy that he had never felt before and did not feel tired at all.

“I spent three days in Taiwan. I flew back at midnight that third day and arrived in Ulsan early the next morning. Before I had time for breakfast, I rushed to the clinic to see patients. The next day I attended a commemoration for the establishment of a forest. On the third day, I performed at a doctors’ music event and sang as a tenor. I barely slept while I was in Taiwan and didn’t have time to rest after I came back. For three days I participated in various activities and did not feel a bit tired,” he said.

“The Falun Dafa practitioners I met never complained no matter what problems they faced. The way they quietly handle any situation impressed me. I believe that a person truly cultivates if he always puts himself in others’ shoes and is willing to withstand inconvenience and discomfort.”

Finding His True Self

Dr. Hwang has practiced Falun Dafa for three years now. He shared, “In the process I realized that my body was misaligned and out of balance because I did not live a righteous lifestyle. Slowly [through practicing Dafa], I discovered who I was.

“I’d gotten used to walking without putting pressure on my injured leg. When I played golf, I kept a distorted posture, which led to an imbalanced body posture. Practicing Falun Dafa allowed me to see my pursuit of comfort, which eventually led to the imbalance of my body. At the same time, I found that over the years, I let my bad thoughts and modern knowledge guide my life as though it was the truth.”

Improvements to Body and Mind

Dr. Hwang particularly disliked a certain person because of his ill-sounding voice and strong opinions. He couldn’t help but frequently pick on the person’s mistakes. After he began practicing Falun Dafa, his perception changed.

“I changed my way of thinking after I read Falun Dafa’s teachings. I believe that I owed the person a lot in my previous life, and that is why he made me so angry. After I began practicing I stopped getting upset with him and felt quite relaxed as a result.”

He also treats his patients with patience. In the past when they talked a lot, he got upset and urged them to get to the point. Now he remains calm and quietly listens to them.

One morning when Dr. Hwang did the exercises, his skin turned itchy and red. He also lost his appetite. As a doctor, he suspected that he was ill. But he quickly realized that this state was meant for him to eliminate his karma.

“Having no appetite did not make me feel uncomfortable. I insisted on doing the exercises anyhow. A few days later the itching went away and I felt better than ever, because I eliminated some bad things. I used to wear glasses when I saw patients or used the computer. Now my vision has returned to normal and I no longer need glasses. I can even read the small fonts on my clocks. Only Falun Dafa, a cultivation of mind and body, could lead to such a miracle.”

Dr. Hwang’s family used to worry about him practicing Falun Dafa because of the ongoing persecution of the practice in China. After they saw that the practice brought such significant improvements to his physical and mental fitness, they no longer worried about him.

Keeping Truthfulness, Compassion, and Forbearance Uppermost in His Mind

Some people in Ulsan call Dr. Hwang, “The doctor who doesn’t usually prescribe shots.” He said that shots don’t do much except allow the medicine to be absorbed a little quicker. “As a result, I don’t prescribe shots unless it is necessary. People nowadays can’t stand any level of pain. However, if someone wants to recover from an illness, he can’t avoid pain.

“Vaccines serve as a preventative measure, not the final solution. If a person can find his inborn abilities, he can naturally heal himself. Kindness and tolerance are part of human nature. If we improve ourselves and attain the moral level we once had, our inborn abilities would come naturally. Falun Dafa is a mind and body practice and it tells us how to improve ourselves in our everyday lives.” 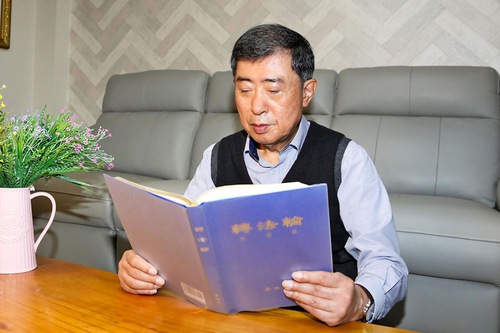 Dr. Hwang keeps Falun Dafa’s principles of Truthfulness, Compassion, Forbearance uppermost in his mind despite his busy daily schedule. “I look forward to my family and friends understanding the benefits of Falun Dafa, and practicing together,” he said.

“My Heart Opened Up When I Let Go of Hatred”