(Minghui.org) The Tianti Bookstore in Seoul’s Yongshan District holds a free nine-day Falun Dafa seminar once a month. With the onset of the pandemic, there has been an uptick in how to stay healthy, both in body and mind. Many amazing things happened to seminar attendees. Here are their stories. 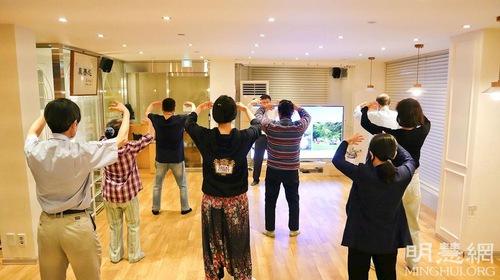 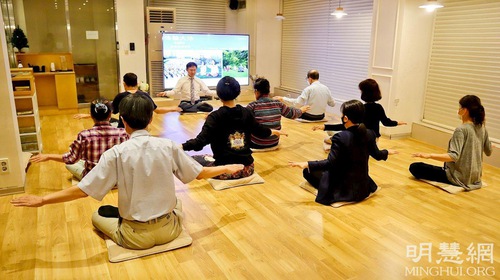 Ms. Han Sunyi, who lives in Incheon City, Gyeonggi Province, was one of the seminar attendees. She is very sensitive to the energy flowing in her body. She said that she changed when she attended the seminar. “Since the first day of the nine-day seminar, I felt energy entering my body and rotating; it was very hot, and I could feel the energy circulate.”

Ms. Han said that her body was often swollen due to poor blood circulation. After joining the seminar, she felt her circulation improve and that bad things were being removed from her body. She mentioned seeing a light between her two eyebrows which allowed her to concentrate on listening to the lectures. “I want to study hard and teach it to people around me,” she said.

Mr. Lee Keehyun, who lives in Yongin City, which is near Seoul, accidentally heard about Falun Dafa in a conversation between a store owner and an acquaintance of his. He was curious and researched it online. After he learned that Falun Dafa is taught for free and the materials are free to download, he decided to join a nine-day seminar. After learning the exercises for a few days, he had a startling experience.

He said, “One day, I happened to look in the bathroom mirror and found that the color of my chest turned white. I had a bad trachea and my chest was always red. When I asked my wife to have a look, she was shocked, too. As a result, I have more confidence in my practice and I am in good spirits. But what’s even more amazing is that I have become more cordial with my wife.”

As Mr. Li changed, his wife changed, too. He added, “When the relationship with the closest person in our lives becomes better, relationships with others also become better. After reading Zhuan Falun, I thought that I would never do anything immoral again, so I stopped badmouthing others. I also speak more kindly.”

Ms. Song Myungja, who lives in the city of Pyeongtaek, had to commute two-and-a-half hours by train every day to attend the seminar. A friend gave her a copy of Zhuan Falun two years ago, but she only got interested in learning the practice recently.

“After seriously reading Zhuan Falun a few months ago, I understood a lot of things I never knew before,” said Ms. Song. “I followed the videos to learn the exercises, then I didn’t feel as tired as before. My body seems to be healthier.”

Her xinxing improved through reading the book and doing the exercises, and her desires became fewer. When she heard that the nine-day seminar would be held, she hurried to join.

Ms. Kim Jung-soon from the Dobong-gu district in Seoul said that reading Zhuan Falun helps her get rid of bad thoughts. Kim, who has been scammed many times, found it difficult to trust anyone. After reading Zhuan Falun repeatedly, she was relieved.

“While studying and reading, I unconsciously felt my distrust melt away. As a result, my relationships with others improved. There is another change in me. Now I want to let go of my laziness and practice diligently,” Kim said.

Ms. Ham Kyung Yeon’s family experienced financial difficulty recently. She occasionally read Zhuan Falun and started practicing the exercises. Ms. Ham said she used to be an atheist and looked down on religions that teach adherents to pray for their own health and wealth.

She felt that Zhuan Falun is different from other books because it teaches people to look inward and think of others. “It touched me, so I wanted to practice,” said Ham.

After practicing, her migraines of many years have improved a lot, and her body has become more at ease. “My daughter, who used to be rude, became docile. The family was very surprised by this change,” Ham added.

“The Impact of Making Vows”