Home > Karma & Virtue > Voices of Support Worldwide
Australian Senator Abetz: People of Goodwill All Around the World are Supportive of Falun Gong Practitioners
Dec. 16, 2021 | By a Minghui correspondent in Australia

The categories of conduct subject to the sanctions include:- The proliferation of weapons of mass destruction- Threats to international peace and security- Malicious cyber-activity- Serious violations or serious abuses of human rights- Activities undermining good governance or the rule of law, including serious corruption- Serious violations of international humanitarian law

The bill allows the Australian government to sanction human rights abusers, corrupt officials, and malicious cyber criminals. Sanctions include freezing the assets of relevant officials, entities, or groups in Australia. Individuals who fall into the categories of sanctions would be barred from entering Australia.

A Minghui reporter held a video interview with Senator the Hon Eric Abetz on this topic. Senator Abertz has always spoken highly of Falun Gong practitioners’ courage in their 20-odd years of peaceful resistance against the persecution by the Chinese Communist Party (CCP). He is especially admirable of practitioners’ courageous efforts in exposing the CCP’s horrendous crimes of forced organ harvesting.

He said, “Falun Gong practitioners all around the world, but especially in China, have suffered tremendously,” and that “the Australian Parliament would never do anything other than outright condemn such a practice (forced organ harvesting).” 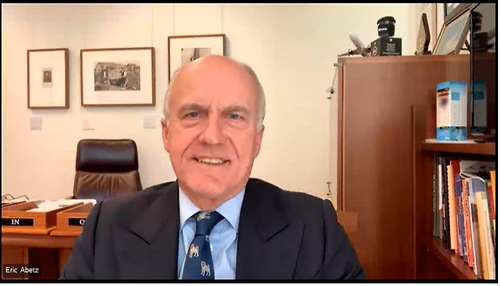 Senator Eric Abetz in the interview

Senator Abetz is currently serving as Chair of Foreign Affairs, Defence and Trade Legislation Committee, and a member of Joint Standing Committee on Intelligence and Security.

He has on many public occasions condemned the crimes committed by the CCP dictatorship and called for support to stop the CCP’s persecution of Falun Gong and other groups.

“I think that it was very important [we passed Magnitsky-style legislation] and it is indicative of the strength of feeling within the Australian body politic that we need to take a stand against especially dictatorships that have a horrid record of human rights abuses,” he said.

Senator Abetz praised Falun Gong practitioners for their courageous efforts in exposing the CCP’s crimes against humanity, including forced organ harvesting, which is “a form of evil never seen on this planet before,” when the practitioners themselves are victims of severe persecution.

“Falun Gong practitioners have been exceptionally strong and brave in bringing this matter to the attention of the world,” he said, “And here we are today with the undisputed findings of the China Tribunal, and this is very important that the China Tribunal under Sir Geoffrey Nice has looked at these allegations and then has come to a conclusion.

“Beyond reasonable doubt... these practices, evil practices, are occurring. One would’ve thought if this was a complete untruth, a made-up, fabricated, there would be some response to say this is untrue, how on earth could they have made these findings.

“But the fact it is undisputed I think shows, one, that it's happening, and two, that which the Falun Gong practitioners have been telling the world for the last two decades, is in fact the truth.

“Now that has been revealed beyond doubt, it’s up to the rest of the world to put pressure on to help protect the Falun Gong practitioners. But I also understand there are also some other prisoners of conscience that are submitted to this barbaric practice as well. But having said that, it is quite clear that the Falun Gong are the major victim group from this barbaric practice.”

Senator Abetz remarked that “the resolve of the Australian people is very much to unequivocally condemn the behavior of the dictatorship with these just ugly, ugly organ harvesting practices.” 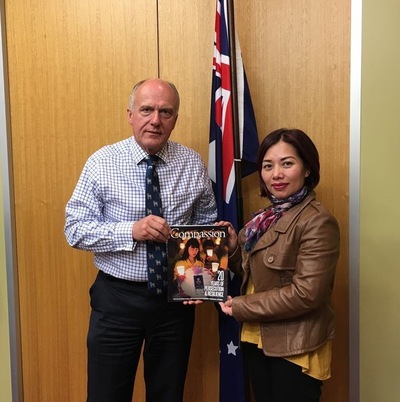 Senator Abetz with a Falun Gong practitioner in his office in Hobart, Tasmania in 2019

Senator Abetz wanted to say to all Falun Gong practitioners via Minghui.org: “You have the right as any other person in the world to practice your religion and your faith, and the way that you have been treated and persecuted by the communist dictatorship in China is unacceptable and that is why people of goodwill all around the world are supportive of the Falun Gong practitioners who are suffering in such a horrendous manner. And I wish them all strength, courage, and ongoing commitment knowing that there are literally billions of people in the world that are supporting them in thought and spirit.”

Senator Abetz has been representing the state of Tasmania since February 1994. He used to work as a lawyer with a generous salary. However, he took a pay cut to get into Parliament because he wanted to uphold justice and safeguard freedom and human rights.

“My motivation has always been to the very best of my ability, to do the right thing and to be the voice for the voiceless,” he said.

He also stressed that his Christian faith helped inform him, especially at difficult times.

“Can I say that my Christian faith has been, and is a very important part of my motivator to be involved in public life. And as a result, I have not been motivated by self-advancement or anything else as much as, that when I go to bed at night and pull the bedsheet up to my chin, I want to know that I’ve done the right thing and been brave for those that need a voice.

“And in relation to the millions of people, hundreds of millions of people that are suffering under the Communist Party dictatorship in China, I say that I am in a privileged position where I can provide a voice for them and highlight the abuses. So be it forced organ harvesting of prisoners of conscience with Falun Gong in particular are the worst hit, just barbaric, needs to be called out, as the China Tribunal has, and it’s now being recognized around the world that this has and is taking place and needs to be stopped.

“Sometimes people call me crazy brave, but I think it’s the only thing to do. And if more men and women that have the privilege of having a microphone like I do as an elected official, would use it to be a voice for good, then I think a lot more pressure would be brought to bear on this dictatorship,” Senator Abetz said.

“Ultimately the People Will Prevail”

Senator Abertz further explained how the Bill would be implemented:

“The Foreign Minister would need to make a decision in relation to each individual, so listed and his or her family, and that will then remain as a listing until such time as somebody wants to appeal that decision or say that it’s an inappropriate decision in relation to themselves. So, we will have natural justice applying where people can argue the case, but one suspects that people with shocking corruption or human rights abuse antecedents wouldn’t want all that aired in a forum, such as would be required if they were to challenge a decision.

“So if you can’t invest in Europe, in the United Kingdom, Australia, Canada, United States, your opportunities become quite limited and that is what we are seeking to do, to ensure that we don’t unwittingly give comfort and a safe haven for ill-gotten revenue to be invested and as a result provide monies to these corrupt people, these human rights abusers that are clearly not deserving of the benefit of such investments.”

When talking about how Australia can push back foreign interference, he said, “We’ve had the Foreign Interference Transparency Scheme which has allowed us to rip up the Belt and Road initiative that the Labour government in Victoria had signed up with the Chinese dictatorship, so that’s been stopped. We’re analyzing the port of Darwin lease agreement, we’re looking at a number of Confucius Institutes in Australia, so we’re looking at that.

“Cybersecurity is another area where as a government, we have ensured greater, stronger protections for our people, our businesses, our government authorities. We are now spending more on defence. We are no longer entertaining an extradition treaty with China.

“So, as a government, we have been seeking to be robust, and each and every day I think there is greater recognition of the importance of standing firm against the dictatorship.”

Senator Abertz holds a firm belief in the power of justice and the people.

“I happen to believe that in the bosom of every man and woman beats a heart that seeks liberty and freedom. And people that live under oppressive regimes have exactly the same desire for freedom and individual liberties as I enjoy in Australia. And so, I would like to think that these dictatorships are, by foisting themselves upon their peoples are very brittle, and ultimately they will fail, they must fail, because ultimately liberty and freedom will win, must win, always has won. Sometimes it takes a long time, but ultimately the people will prevail,” he said.

The CCP Human Rights Abusers No Longer Have a Safe Haven

Australian Liberal Party Senator James Paterson, who has been very outspoken about human rights abuses by the CCP and a strong advocate of the Bill, said, “No longer will (they) be able to comfort themselves with the idea that even if they were sanctioned by our partners, Australia could be a safe haven for their ill-gotten gains or a refuge for them to flee to.” He said he wanted to see the sanctions extended worldwide so human rights abusers and corrupt foreign officials had nowhere to hide.

Australian Labor Party Senator Kimberley Kitching tweeted that although different parties have disagreements on other issues, they all voted for the “Magnitsky-style and Other Thematic Sanctions” bill.

“A strong and clear message will be sent to lower-ranking officials and criminal thugs that their crimes, whether on behalf of or protected by their superiors, will not be immune from international consequences,” Kitching said.

“This legislation says to them, ‘Your stolen money is no good here. No matter how you steal from your people, there will be no shopping trips to Paris, no harbour front mansions in Sydney, no skiing in Aspen, and no nest egg in a western bank.”

On July 20, 2021, the 22nd anniversary of Falun Gong’s peaceful resistance against the persecution, Falun Gong practitioners from 37 countries submitted another list of perpetrators to their respective governments, demanding that the perpetrators and their families be sanctioned in accordance with the law, including banning their entry and freezing their ill-gotten assets. The 37 countries include the Five Eyes Alliance (United States, Canada, the United Kingdom, Australia, and New Zealand) and 23 countries of the European Union.

These practitioners said that they would continue to collect and document the perpetrators’ conduct in the persecution as well as their personal information, and to submit the info to Minghui.org.

To date, as many as 113,533 perpetrators have been on the list, and sooner or later, all perpetrators will appear on the sanctions list of democratic governments.

The “Magnitsky-style laws” was named after Mr. Sergei Magnitsky, a Russian lawyer and tax auditor. He was unlawfully detained for exposing a deep web of tax fraud linked to the Kremlin officials in November 2008, suffered torture, and was denied medical treatment. He died under mysterious circumstances in jail in November 2009.

His death raised great concerns in Russia and around the world and consequently led to the establishment of “Magnitsky style laws” to protect human rights and punish those who committed human rights abuses and gross corruption anywhere in the world.