Home > News & Events > Parades & Other Community Events
Portugal: Falun Dafa Practitioners Call for an End to the Persecution in China on Human Rights Day
Dec. 16, 2021 | By a Falun Dafa practitioner in Portugal

(Minghui.org) To mark International Human Rights Day, Falun Dafa practitioners in Portugal held activities throughout Lisbon on December 11, 2021. During their rally, they called on people to learn about the persecution of the spiritual practice in China and work together to end the CCP’s (Chinese Communist Party) brutality. 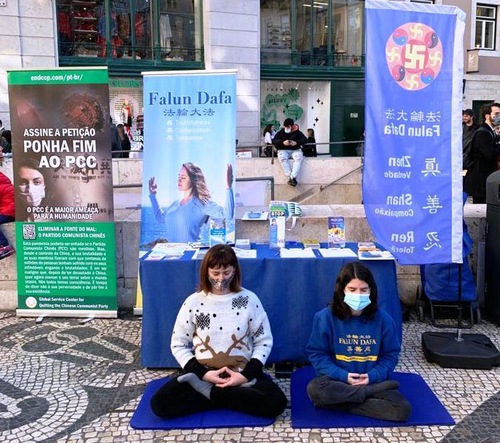 Practitioners also peacefully protested near the Chinese Embassy on the morning of December 11. They displayed banners and boards with messages such as, “Falun Dafa Is Good” and “Stop Harvesting Organs from Falun Dafa Practitioners in China.” They hope that more people will learn about the CCP’s trampling on human rights and help stop the persecution.

That afternoon, practitioners moved their activities to Lisbon’s bustling city center. They collected signatures calling for an end to the CCP’s forced organ harvesting from illegally detained practitioners while they are still alive. People who understood the facts signed the petition. Many expressed their support and said they hope their signatures will help.

December 10 this year marked the 73rd anniversary of the Universal Declaration of Human Rights. The declaration states that all human beings are born free and equal and are entitled to dignity and basic rights. Those who practice Falun Dafa, with its guiding principles of Truthfulness-Compassion-Forbearance, become kind and peaceful as their moral standards and physical well-being improve. It is widely recognized that it benefits both the people and the countries where it is practiced.

Falun Dafa (also known as Falun Gong) was first introduced to the public by Mr. Li Hongzhi in Changchun, China, in 1992. The spiritual discipline is now practiced in over 100 countries and regions worldwide. Millions of people who have embraced the teachings, which are based on the principles of Truthfulness, Compassion, and Forbearance, and learned the five gentle exercises have experienced uplifted health and well-being.

Jiang Zemin, former head of the CCP, perceived the spiritual discipline's growing popularity as a threat to the Party's atheistic ideology and on July 20, 1999, issued an order to ban the practice.

“Texas: Rally to End the Persecution Held in Houston on Human Rights Day”