(Minghui.org) Today's news from China includes incidents of persecution that took place in 11 cities or counties in 7 provinces, where at least 32 practitioners were recently persecuted for their belief. 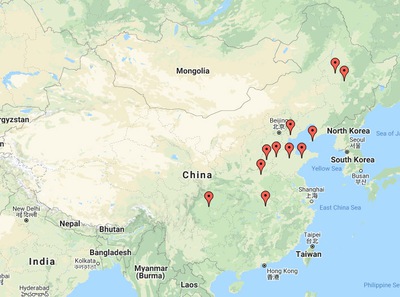 Ms. Zhao Yulan and Ms. Ying Xianxiu from Shehong City were seen on surveillance cameras when they talked to people about Falun Gong in Jinjia Town in April 2021. Both practitioners were arrested, detained, and then released on bail. They were scheduled to be tried by the Shehong City Court on the morning of November 23.

Mr. Yang Xiuhua was arrested at home and his home was ransacked by over 10 State Security officers on February 25. He was released on bail after failing the physical examination that evening. He was scheduled to be tried at the Shehong City Court on the morning of November 24.

Ms. Lu Chunyu from Ershilipu Town, Free Trade Zone, was scheduled to be tried via video link by the Dalian Economic and Technological Development Zone Court at 1:30 p.m. on November 30, 2021.

Ms. Shen Yanqiao was arrested four months ago and is still being held in the Wuhan City No. 1 Detention Center.

Police assistant Ouyang Zhancun from the Ciyutuo Town Police Station in Luanzhou City led two police officers from Luanzhou City to Ms. Yang Yunling’s home at around 6 p.m. on November 18, 2021. They asked Ms. Yang’s husband whether he supported his wife’s practice, and how many children they had. Afterward, they ransacked the place and confiscated photos of the founder of Falun Gong, a Falun Gong book, and a calendar.

Four practitioners were reading the Falun Gong teachings at Ms. Liu Zhiying’s home on the morning of November 20, 2021. Suddenly, officers from the Hanshui Street Police Station broke in, ransacked the place, and arrested them. Elderly Ms. Liu and elderly Ms. Ding were taken to the Etouwan Brainwashing Center. The whereabouts of the other two practitioners are unknown.

Ms. Hu Yulian was arrested at home by officers from the Donghu Police Department on November 20, 2021. The officers took her to the Taikang Detention Center for detention.

Officers from the Liuying Police Station, staff members from Liuying Township government, Party member Yu Fanyin in Liuying Village and others went to Ms. Gao Fenlan’s home to take photos at around 10 a.m. on November 18, 2021. They later went to Mr. Hu Jinshe’s home to photograph him and harass him.

Ms. Xiao Wenzhen, of the Thermal Power Plant, is in her 70s. She was harassed at home on August 24, 2021, by unidentified people in her community. These people photographed her.

On the morning of November 1, three police officers came and pressured Ms. Xiao to sign paperwork. She refused to sign and told them the truth about Falun Gong.

Ms. Zhang Jun and her sister from Pingshan Town, Acheng District, were arrested on November 14, 2021. They returned home the following day.

The police had records of Ms. Zhang for distributing Falun Gong materials in Wuchang City, and she is currently under six-month residential surveillance, enforced by the police. Cameras have been installed at the entrance and in the corridors of her apartment building.

Ms. Su Xueyun was harassed by five people from the Pingdu City Political and Legal Affairs Committee and 610 Office on the morning of November 18, 2021. They photographed her and coaxed her into signing a “guarantee statement” which had no mention of Falun Gong.