(Minghui.org) Today's news from China includes incidents of persecution that took place in 16 cities or counties in 9 provinces, where at least 28 practitioners were recently persecuted for their belief. 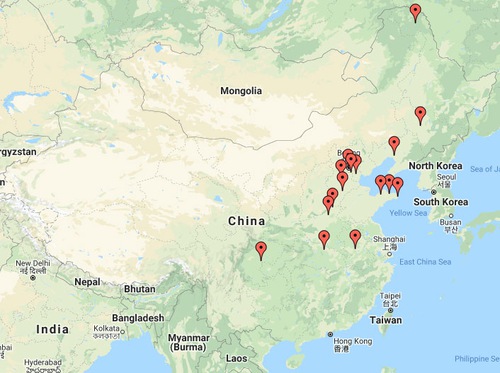 Ms. Xu Ping works at the Construction Division, No. 4 Bureau of China Railway. Li Hui, a prosecutor of the Shushan District Procuratorate, brought charges against her on November 2, 2021. Her case files have been sent to Shushan District Court.

Ms. Lu Zhenrong was reported to the police for talking to people about how to stay healthy during the pandemic. On the morning of November 19, 2021, she was arrested by officers from the 110 Response Unit. She has not been released. Her family does not know her whereabouts. Further information is pending.

Six or seven people from the Yuquanying Police Station, Fengtai District, broke into the home of Ms. Liu Xiuyun, who is in her 60s, on the morning of November 18, 2021. They arrested her and confiscated her Falun Gong books. Officers watched her distribute Falun Dafa materials on surveillance cameras, followed her home and arrested her.

Ms. Liu was placed in criminal detention on the morning of November 19. She is being held in the Fengtai District Detention Center.

Mr. Lin Zuoying from Changjiazhuang Village, Shidao Town, was reported to the police when he went out on an errand. He was arrested by officers from the Rongcheng City Police Department. He is being held in the Rongcheng City Detention Center.

On the evening of July 30, 2021, officers from the Rongcheng City Police Department and the Wanglian Police Station, Shidao Town, went to Mr. Lin’s home and ransacked the place when he was not at home. They confiscated a computer, a printer, a DVD burner, photos of the founder of Falun Gong, Falun Gong books, and printed materials. Since Mr. Lin was not present at the time, the specific number of items confiscated is not known and is pending verification.

Mr. Zheng Lijun was arrested by officers from the Wanshun Police Station, Chaoyang District, on November 17, 2021.

One year ago, on November 20, 2020, Mr. Zheng was arrested by the officers for distributing QR code cards for unrestricted Internet access. He was released on bail after failing the physical examination.

After the case against Mr. Zheng was turned over to the procuratorate, the police called his family and asked him to go there. He did not go, and was put on the most-wanted list, which led to this arrest.

Ms. Chang Luyun from Qiushuwan Village was arrested at home by officers from the Hengshui Town Police Station, Linzhou City, on October 2, 2021. Her Falun Gong books were confiscated. She is being held in the Anyang City Detention Center.

Shen Xilian (gender unknown) from Yaocun Town, Linzhou City, was arrested at home around 8 a.m. on October 21. Shen’s current situation is not clear.

Shi Bianying and Yu Baoying from Xinzhuang Village were arrested by six officers from the Beilingyang Police Station at 4 p.m. and 6 p.m. on October 23. They were taken to the Haojiazhuang Detention Center, Huanghua Town.

Mr. Zheng, a retired employee of the Xinxiang railway police force, is in his 70s. Around 7 p.m. on November 3, 2021, two residential police officers and other people went to Mr. Zheng’s home. One of the officers unlocked the anti-theft door. These people rushed in and started ransacking the place. They confiscated a copy of Zhuan Falun, three computers, over 10 calendars, and 50,000 yuan paper bills with Falun Gong facts printed on them. They arrested Mr. Zheng. His current whereabouts are unknown.

Prior to this, this group of people arrested a displaced female practitioner who was about 40 or 50 years old, ransacked her place, and confiscated a large number of pieces of equipment for printing and binding books, computers, and Dafa books. Further details are pending.

Wang Yanhui (gender unknown) from North Ligezhuang Village, Lizhuang Township, Qingyuan District, was reported to the police around 11 a.m. on September 12, 2021, for distributing Falun Gong materials at Dazhangzhuang Village farmers market in Ranzhuang Township. Wang was arrested by officers from the Ranzhuang Police Station. That afternoon Wang was taken to the Qingyuan District Police Department for a physical examination. Wang failed the examination with a blood pressure reading of 176 mmHg, and was taken home that evening.

Around 10 a.m. on October 28, two officers from the Yangcheng Township Police Station and two people from the Lizhuang Township government arrested Wang at home. It was reported that Wang was placed on the list of practitioners who were closely watched by the provincial public security department. Wang was taken to the local police department for a physical examination. Failing the physical exam again, Wang was taken home at 8 p.m..

Around 11 a.m. on October 29, Wang was taken to the police department for another round of physical examinations. Despite failing the third time, Wang was forcibly taken to the Baoding Detention Center.

The detention center staff asked if Wang suffered from any infectious diseases. Wang admitted to having hepatitis. After the detention center refused to admit Wang, Wang was taken back to the police department for a liver examination. After checking and confirming that Wang had hepatitis, the officers took Wang home.

Before leaving, the officers said that Wang would not be allowed to leave the village or distribute Falun Gong materials. They threatened that Wang would be taken directly to the detention center if spotted again doing that.

Ms. Wang Xiubo was placed on the local police online wanted list years ago. She became displaced and lived in Qingdao City, Liaoning Province. She was harassed during the “zero-out” campaign launched by the Chinese Communist Party (CCP).

Three people from the Hanjiayuan Forestry Police Department in Heilongjiang Province arrested Ms. Wang on February 24, 2021, at her rented home in a small town on the South Island of Qingdao Development Zone, Liaoning Province.

On February 26 (the day of the Lantern Festival), Ms. Wang was locked up in the Huma County Detention Center. Ms. Wang held firm her belief in Falun Gong, refused to transform, and refused to write three statements. Her family was not allowed to visit her during her detention.

Ms. Wang was sentenced to one year and two months in prison by the Tahe County Court on October 28. She went home on November 16.

Ms. Chen Maohua from the Donggushiyou New Residential Community of Bohai Petroleum Company, Binhai New Area, was taken to a forced labor camp in November 2000 and held there for three years for practicing Falun Gong. She was sentenced to three years in prison in 2004.

Since then, police officer Gao Xiong in the No. 2 Section of Bohaishiyou New Residential Community often harassed Ms. Chen and her family when the annual meetings of the People’s National Congress and Chinese People’s Political Consultative Conference were in session. Gao also called the work unit of Ms. Chen’s child to find out whether Ms. Chen still practiced Falun Gong.

In 2021, Bohai Petroleum Social Security Bureau officials forced Ms. Chen to pay back the pension she received when she was imprisoned. They would go to her home and knock violently on the door to demand the pension be returned. They threatened that if she did not give them what they asked for, they would bring her to court.

Ms. Chen and her husband had to move to their son’s home. On one occasion, Ms. Chen was reported to the police for telling people about Falun Gong. The police located and threatened her. Fearing that Ms. Chen would be arrested again, her son paid the authorities 70,000 yuan to pay back the pension the social security bureau demanded.

During this year’s 100th anniversary of the founding of the CCP, Gao asked Chen’s son to pick up a form to be filled out by her husband.

After the five practitioners were arrested, they were directly taken to the Hehong Hotel, a facility operated by the Domestic Security Division. There are no windows in the hotel rooms where the practitioners were kept, and the rooms are soundproof. There are four such rooms, two of which are bare except for an iron chair, and the other two contain an iron chair and a bed.

Ms. Lu Lizhen, 67, was taken to a detention center by officers from the Xi’an Square Police Station on November 17. The officers ransacked her home and confiscated Falun Gong books, photos of the founder of Falun Gong, a printer, a computer, printed materials, and paper bills with facts about Falun Gong printed on them.

Deputy director Xu Jianlu and another officer from the Longhe Police Station broke into Ms. Liu Naifen’s home on November 16, 2021, and wanted to take her away with them. Elderly Ms. Liu did not cooperate and sat on the ground. Xu called Zhang Ming of the Anci District Court and asked the court to send people to take care of this. Zhang found excuses and did not send anyone. Xu then called three officers from the police station and forcibly carried the elderly woman away and brought her to the detention center. Ms. Liu is currently held in the Langfang City Detention Center.

Ms. Duan Hengrong, in her 70s, was harassed by the police in November 2021. The officers ransacked her home and confiscated all her Falun Dafa books.

Tieshu Community Management Office staff members Liu and Dai Yunqing led community police assistant He Jun and others to knock on Mr. Ke Yugang’s door around 8 p.m. on November 5, 2021. They demanded Mr. Ke to open the door and sign paperwork. After being turned down, they threatened to arrest him. On November 16, they went to Mr. Ke’s workplace to harass him.

Mr. Zhou Shaotang, 83, from Yintun Village, Dongguo Town, Panshan County, was released on bail. The case against him was brought to the Xinglongtai Court and filed.

Ms. Zhou Shuying, in her 80s, and Ms. Jin ran into plainclothes officers while clarifying the truth about Falun Gong at the Nanwang Temple Fair in Penglai City on the morning of November 14, 2021. They were arrested by two officers and taken to the Nanwang Police Station, where they were kept from 8:00 a.m. until 12:00 noon.

While the two practitioners were held in the police station, the officers rummaged through their bags and confiscated Falun Gong materials and about 100 yuan from each practitioner’s bag. They also forced elderly Ms. Zhou to take off her mask so they could photograph her and say her name. When Ms. Zhou refused to cooperate the officers grabbed her senior residential identification card and threatened to tear it up. Both practitioners were later released.

“My Cultivation Experiences as a Project Coordinator”