(Minghui.org) Today's news from China includes incidents of persecution that took place in 12 cities or counties in 5 provinces, where at least 24 practitioners were recently persecuted for their belief. 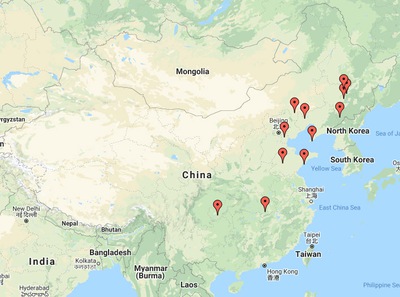 It was learned that Ms. Xu Mingjin fell and was injured after being arrested. She is now hospitalized in the Beiji Hospital.

Mr. Yang Jianwei was arrested at his workplace around November 6, 2021, by officers from the Shulan Domestic Security Division. The details are being investigated.

Several officers from the Dalianwan Police Station went to Ms. Sha Jinghua’s home on November 10, 2021. They took a photo of Falun Gong’s founder, some Falun Gong books and several calendars containing information about Falun Gong. They talked about Ms. Sha’s arrest in October and demanded she sign a paper renouncing Falun Gong. She refused. The officers left, but then came back and knocked on the door again. When Ms. Sha did not open the door they left.

Ms. Xu Hongzhi and her sister Ms. Xu Hongxia live in Taiqian Village. Li Haiyan, the Party secretary of Taiqian Village, called Ms. Xu Hongzhi’s daughter on October 28, 2021, saying that she would come to her home in 2 or 3 days to have her mother sign a paper renouncing Falun Gong. Li said that she would cross her mother’s name off the CCP’s blacklist once she signed, and that would benefit her children’s future.(Practitioners’ children are often implicated and can lose their jobs or suffer other losses if their parents persevere in practicing Falun Gong. The CCP uses this threat to pressure practitioners’ families.)

Li also called Ms. Xu Hongxia’s husband and asked him to come to the Village Comprehensive Management Office. Li asked him to sign a statement to renounce Falun Gong on his wife’s behalf. Her husband insisted that Ms. Xu did not do anything wrong by being a good person. He refused to sign.

Ms. Ma Junting, 82, an employee of Tai’an Science & Technologies University, was reported to police for distributing informational materials about Falun Gong to her neighbors and taxi drivers. In October the Taishan Court sentenced her to 4 years in prison and fined her 30,000 yuan. Her home was ransacked and all her Falun Gong books were seized. She was previously fined 40,000 yuan when another practitioner was arrested and she was implicated. Her husband Mr. Deng Tieliu, a professor at the Tai’an Science & Technologies University, was anguished and angered when his wife was repeatedly persecuted. As a result, he became ill and was hospitalized.

During this period, over 10 officers barged into their home and tried to take Ms. Ma to prison. Ms. Ma told them sternly, “My husband fell sick and was hospitalized because of the persecution you imposed on me. I won’t go with you!” The officers left to inquire about Mr. Deng’s condition.

Having experienced great mental suffering in the past 20 years while his wife was repeatedly persecuted, Mr. Deng passed away on November 9, in sadness and agony.

Ms. Hao Yufang’s home was ransacked in the early morning hours of November 11, 2021, by agents from the Xianning Domestic Security Division or the Political and Legal Affairs Committee or the Fushan Police Station, according to Ms. Hao’s neighbors.

Ms. Hao already left home in September in order to avoid the persecution. Only her husband was at home when agents ransacked the place. Their neighbors were terrified and could not understand why the police treated Ms. Hao and her family like this.

Ms. Zhang Zhenyong, a high school teacher, and another practitioner were also arrested on the same day.

Ms. Liu, an elderly practitioner, was reported to the police around October 20, 2021. Four or five officers including Gao Wei arrested her and ransacked her home. They seized a copy of Zhuan Falun, two audio players, an MP3 player, over 1,000 banknotes with information about Falun Gong written on them and other items. She was released on the same day due to her old age.

Mr. Li Hua and his wife Ms. Zhao Guiyong were arrested on October 27, 2021, for distributing informational materials about Falun Gong. Mr. Li was held in the Tonghua Detention Center and Ms. Zhao in the Changliu Detention Center.

Their daughter went to the Kuaida Police Station in the rain on November 8 and asked about her parent’s situation. Officers at the police station said that they were not aware of this case. The daughter then went to the county police department but the janitor did not let her in.

Their daughter went to the Tonghua Detention Center and wanted to deposit some clothes and money for her father. The detention center did not accept the clothes. They also refused to deposit money because the daughter did not have a deposit card. The daughter went to the Changliu Detention Center and wanted to leave some clothes for her mother, but the center refused to accept them.

An agent from the Pingdu Political and Legal Affairs Committee called Ms. Su Xueyun’s daughter on November 10, 2021, and demanded to meet her and have a conversation. Ms. Su’s daughter refused. The agent threatened to look for her husband.