(Minghui.org) Beijing issued a yellow alert for heavy air pollution in its Fangshan District and Tongzhou District on November 6. On the same day, a red alert was issued in Dandong City, Liaoning Province.

In China, there are three levels of air pollution alerts, including yellow, orange, and red (from less severe to most severe). 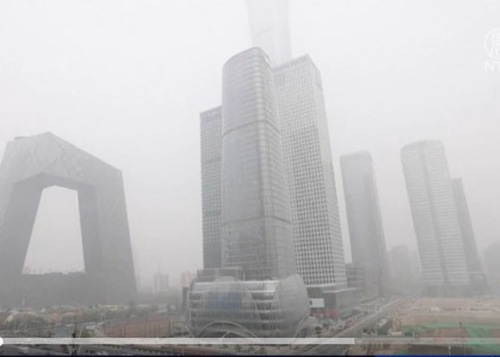 Heavy smog in Beijing on the morning of November 6, 2021

According to news reports, 85 Chinese cities had small airborne particles known as PM2.5 as of 7 a.m. on November 5. They included Beijing, Tianjin, Hebei Province, Feiwei Plain (from Shanxi Province to Shaanxi Province), Yangtze River Delta (Shanghai, Jiangsu Province, Zhejiang Province), Middle Reaches of Yangtze River (from Sichuan Province to Hubei Province), and northeast China. Among them, 6 cities had severe pollution as measured by the level of PM2.5.

This wave of pollution started with an orange alert issued on November 2 in Henan Province (Kaifeng, Jiaozuo, Nanyang and other cities). It then spread to other places in central and eastern China.

In pictures taken by Beijing residents on 8:30 a.m. of November 6, heavy smog blanketed the city. Residents reported the smog was pungent and caused shortness of breath, similar to the smog that Beijing had in the past.

“Woman Forced to Serve an Expired Prison Term for Her Faith”