(Minghui.org) The Art of Zhen Shan Ren (Truthfulness-Compassion-Forbearance) International Exhibition can be seen at Georgia Gwinnett College (GGC) in Lawrenceville, Georgia, about an hour’s drive northeast of Atlanta, until November 19, 2021. The opening ceremony was held on October 25 in the student center.

The nearly 50 oil paintings and watercolors on display reflect the inner strength and beauty of Falun Dafa, document the ongoing persecution at the hands of the Chinese Communist Party, and portray practitioners’ peaceful resistance to the suppression. The exhibition received a warm welcome from students, faculty, and staff. 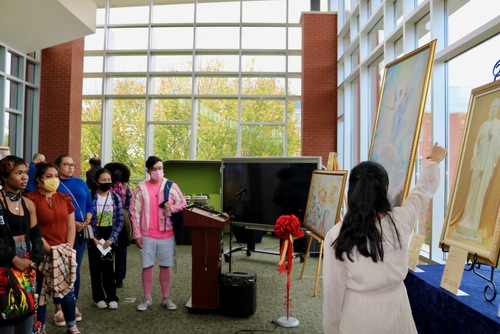 Chloe Phong, president of the Falun Dafa Club at GGC, begins a guided tour introducing the first theme of the exhibition, the “Arrival of the Lord Buddha.” 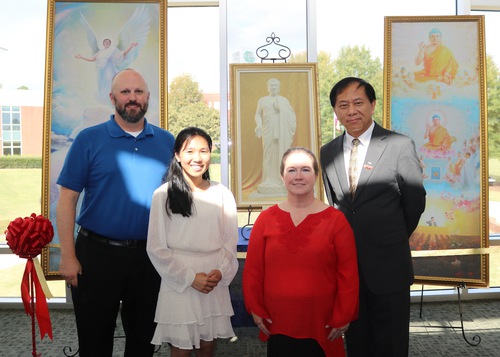 Speaking at the opening ceremony, Dr. Rachel Nabulsi, the Falun Dafa Club advisor, particularly thanked the organizers of the event for providing an opportunity for faculty, staff, and students to “learn about the peaceful practice of Falun Dafa through the medium of art, which transcends language and reaches to the heart of the human experience. The beautiful and heartbreaking images here are an important way of sharing the strength of those who stand up for their faith in the face of harsh oppression.”

One painting that stood out for Dr. Nabulsi was “Freed by Faith” in which a young woman (a Falun Dafa practitioner) walks out of a prison gate while the guards are asleep. It reminded her of the story of Paul the Apostle, in which Paul was also imprisoned for his belief but then was miraculously released. She was also very moved by Dafa practitioners’ patience and forgiveness when confronted with these horrible physical abuses. 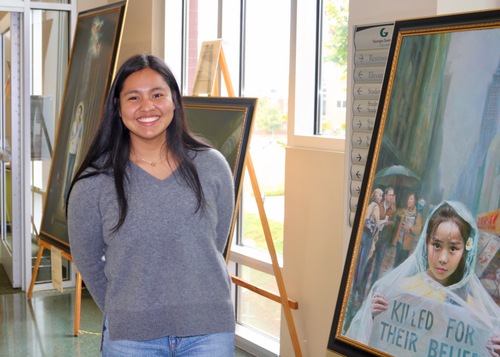 Beatriz Ramos in front of “The Call of Innocence”

Beatriz Ramos, a senior majoring in elementary education, was moved to tears by the paintings. From one painting to another, she felt as if she had entered the practitioners’ harsh reality. She was particularly touched by the painting “Illumination” in which a woman reads the Falun Dafa teachings while holding her sleeping baby. Beatriz remembered when, growing up, her mother would read the Bible to her before she fell asleep.

Beatriz was also moved by the painting “Golden Lotus” in which a young mother and her newborn baby are shown after having been tortured to death. She explained, “The people who are doing this have no limits. There’s no restraint—like, they don’t care if you’re a newborn baby. They have no sense of love... if it was somebody in their family, how would they react if they were to see that image?” 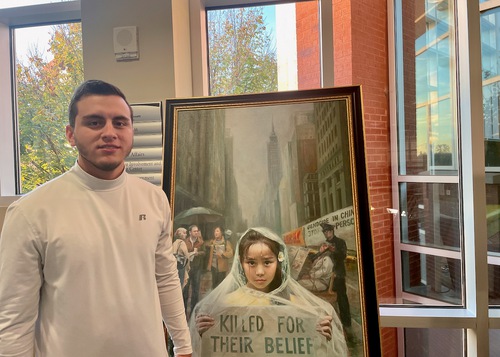 Alejandro Osorio in front of “The Call of Innocence”

Alejandro Osorio, a sophomore, was in disbelief at the brutality of the persecution. He said, “I see the whole of human suffering and the persecution of just a belief… something as simple as that!” He was deeply moved by the artworks and the message behind them. 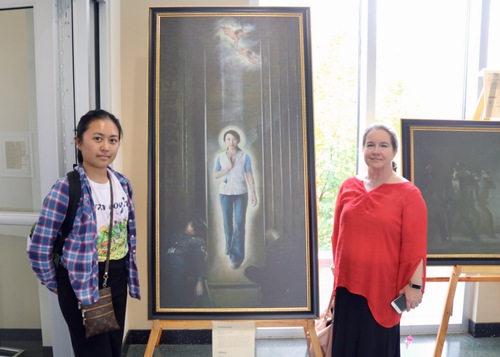 Irene Chanthavong (left) and Dr. Nabulsi (right) next to “Freed by Faith”

Irene Chanthavong, a freshman majoring in Cinema - Entertainment Industries Studies, tried not to cry as she viewed the artwork. She said that the paintings were very emotional, and she was amazed by the courage and perseverance of Falun Dafa practitioners in the face of such persecution. As an art-lover, Irene was so inspired by the exhibition, especially the painting “Pure Lotus,” that she wanted to start painting on canvas again. She thanked the organizers sincerely for organizing the event and inviting her.

Many visitors left their names and comments in the guest notebook, thanking the artists and organizers for the opportunity to see such beautiful, informative, and thought-provoking artworks. Many of them hoped that the college would continue to bring more events like this to the campus.

The exhibition will be on display through November 19. 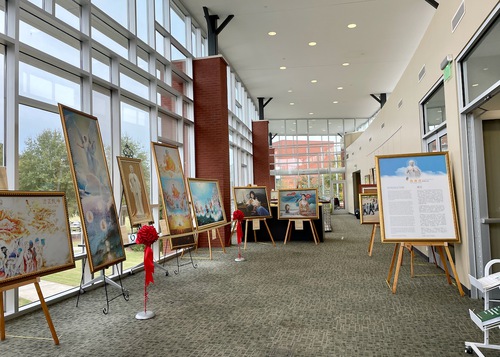 “Improving While Clarifying the Truth of Dafa”