(Minghui.org) Falun Dafa practitioners held a large-scale rally and parade in Munich on October 29 to introduce the practice to the public and to tell people about the ongoing persecution of the practice in China. Human rights advocates spoke during the rally and many passersby signed a petition calling for an end to the persecution. 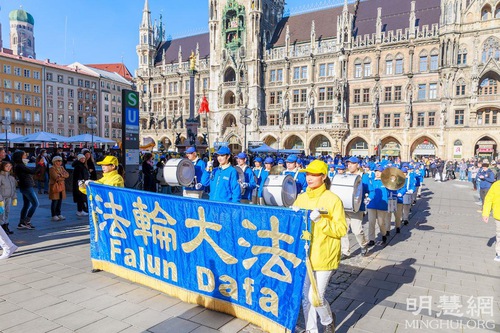 The Falun Dafa parade on October 29 started off at Marienplatz, the central square in Munich. 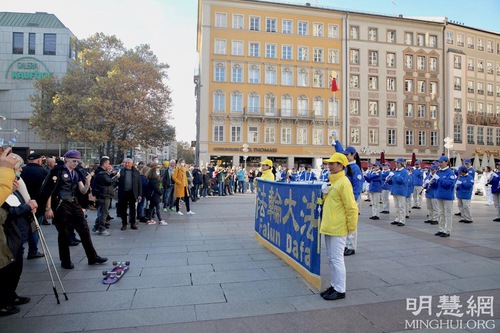 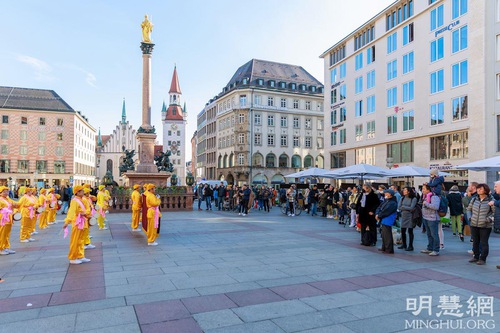 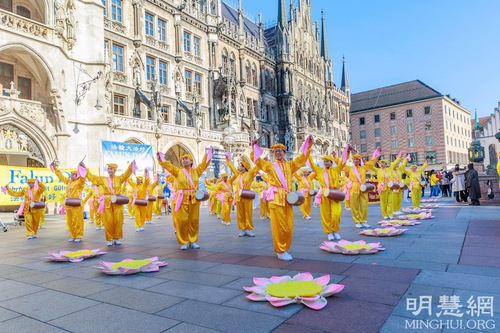 Munich is the capital of Bavaria and the third-largest city in Germany and is a hub of culture, economics, and politics. Many people were out enjoying the fine autumn weather and stopped to watch and listen to the practitioners’ activities. There were performances by the Tian Guo Marching Band, and the waist drum team. The dragon dance team consisted of practitioners who traveled from Poland and Czechia. Many people gathered to watch and enthusiastically applauded. 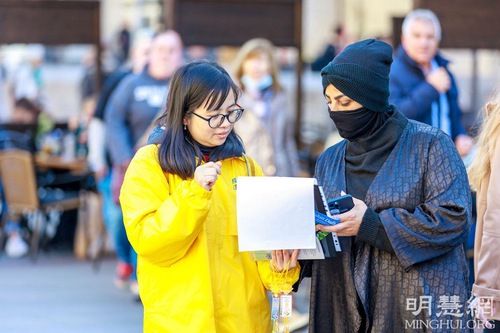 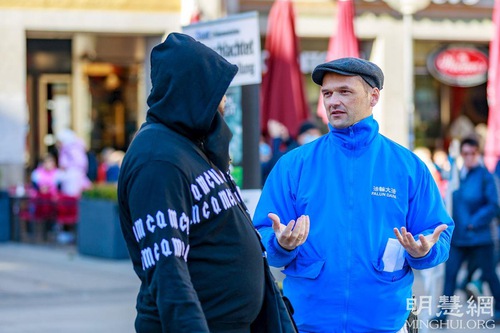 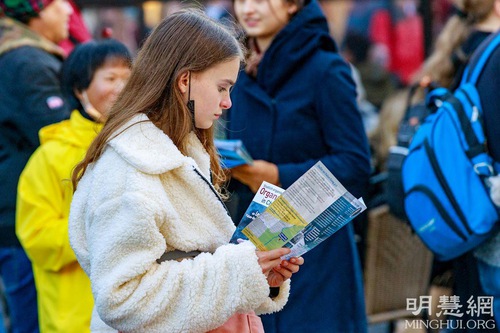 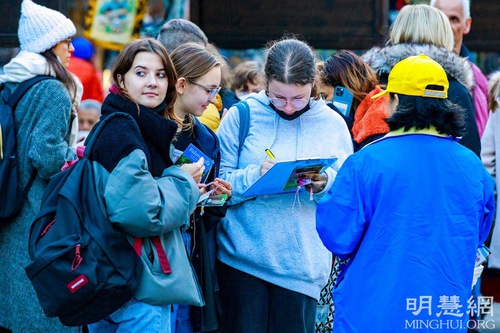 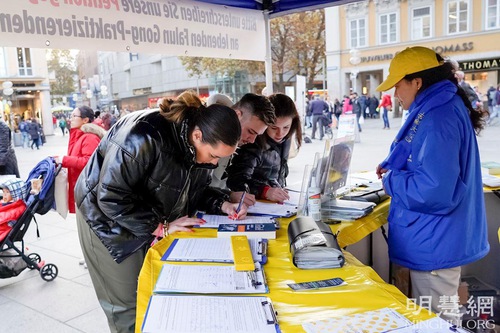 Following the rally at Marienplatz, practitioners marched through Viktualienmarkt, Tal, and Maximilianstraße, and passed by the National Theater as well as the Residenz (a former royal palace). From there they then went through Odeonsplatz before returning to Marienplatz. Many people read the materials about Falun Dafa and the 22-year-long persecution in China. Some gave practitioners the thumbs up and signed the petition calling for an end to the persecution. 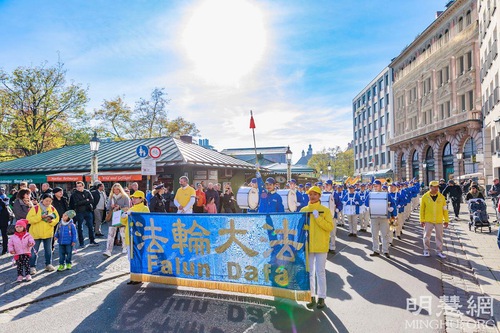 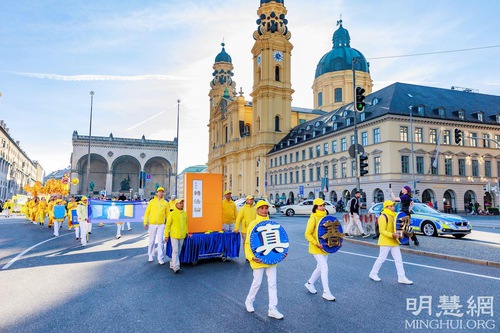 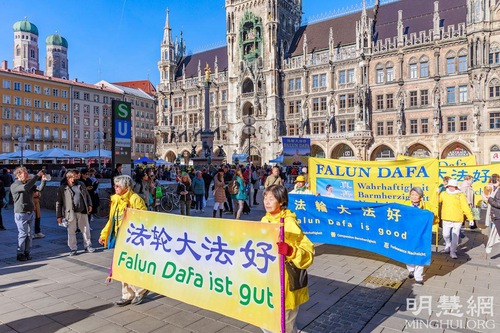 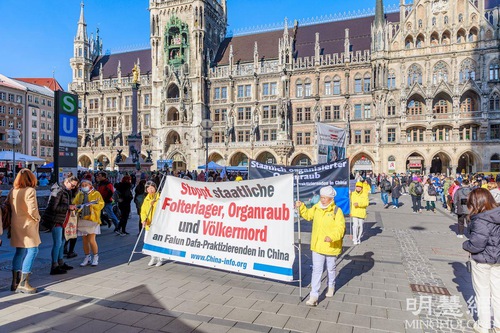 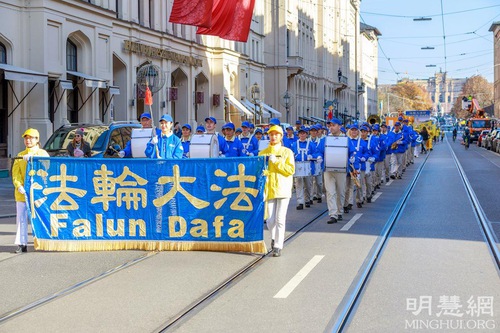 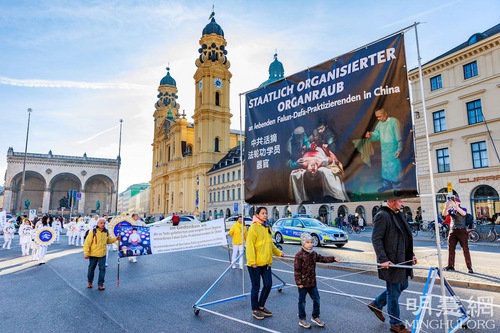 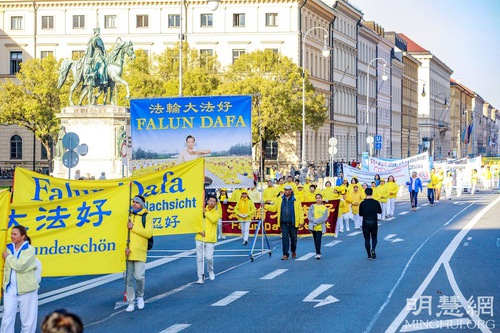 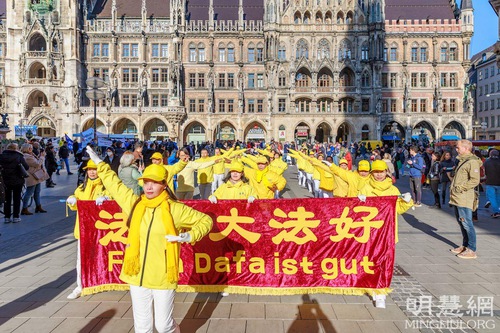 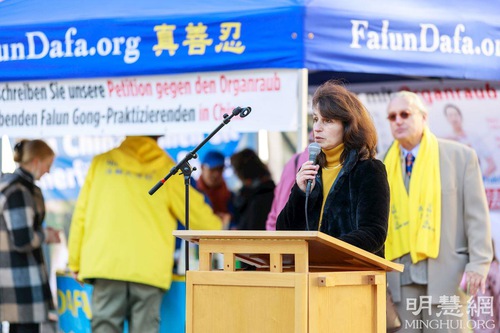 During the rally before the parade, a practitioner talked about the persecution in China. 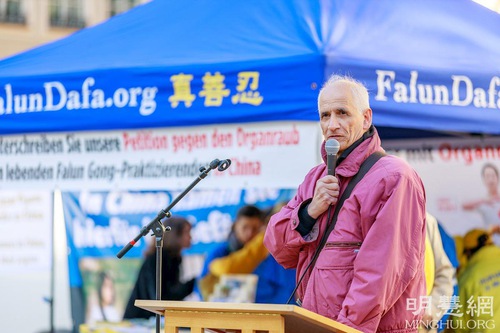 Jürgen Thierack from the Munich division of the International Society for Human Rights (ISHR) addressed the event.

Jürgen Thierack, head of the Munich division of the International Society for Human Rights (ISHR), said his organization has paid attention to the atrocities committed against practitioners for years. He said, “Falun Dafa was introduced by Mr. Li Hongzhi to the public in China in 1992. Although the practice was broadly accepted and praised by the general public as well as the government, then top Chinese Communist Party (CCP) leader Jiang Zemin nonetheless treated Falun Dafa as an enemy. He launched a massive financial suppression and physical elimination of practitioners.”

Mr. Thierack asked, “Why would the regime view a peaceful spiritual practice such as Falun Dafa as an enemy? Because there were about 70 million practitioners in China, and the CCP was afraid it might lose control of the people. While labeling Falun Dafa as an enemy of the state and defaming it with extensive hate propaganda, the regime arrested a large number of practitioners followed by detention and torture.”

Pointing to the information on the banners, Mr. Thierack said the CCP has even killed detained practitioners and sold their organs for profit. He added that it would be hard to imagine that such a horror could take place in this world today. He called on more people to raise awareness of the issue through activities and other avenues, so that the general public will know what is going on.

He wrote, “The CCP regime is well known for its brutality and lies. Despite the harsh persecution since 1999, however, practitioners have remained persistent to its principles like a phoenix rising from the ashes. After over 20 years of continued suppression, Falun Dafa is now being practiced in over 100 countries with the main teachings of Zhuan Falun translated in more than 40 languages. To overcome the massive information blockade and misinformation by the CCP, practitioners have established a television network, newspaper, and websites to help Chinese residents access overseas information and learn the facts.”

As a human rights advocate, Fei said he sincerely thanked practitioners for their great contribution and congratulated them on their success. 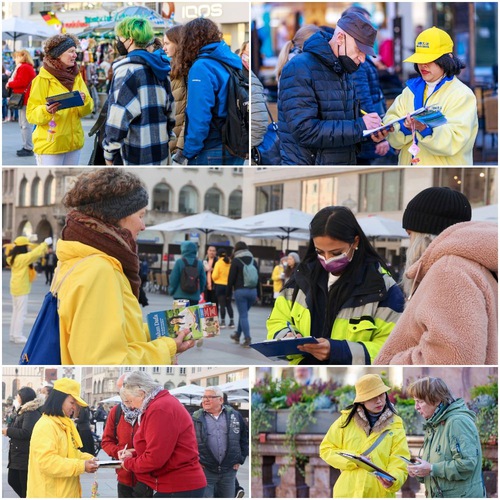 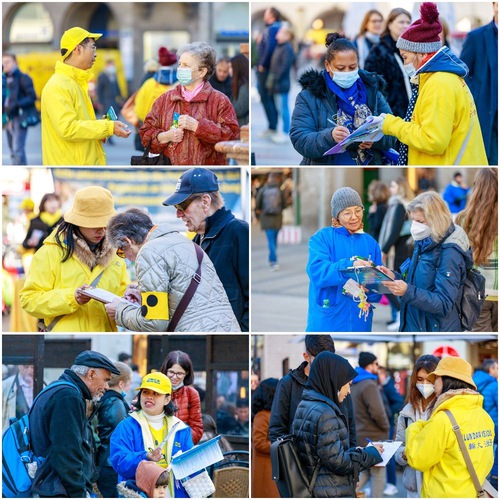 People learn about the ongoing persecution of Falun Dafa and sign the petition to end it.

Two educators from Munich, Niklauda and Werner Dill, stopped to watch the practitioners’ parade and videotaped it. Niklauda remarked that the activity was peaceful and inspiring. She had previously heard about the CCP’s organ harvesting and found it disgusting. The couple signed the petition and said that this atrocity must stop.

Niklauda hopes that more Chinese people will stand up to the totalitarian regime. She understands that brainwashing by the CCP has deprived them of their free-thinking. Nonetheless, she hopes they will learn the facts and step forward. She feels that if one-third of Chinese citizens stood up, the CCP would collapse.

She also said it is absolutely wrong for the CCP to ban the principles of Truthfulness-Compassion-Forbearance. As a Catholic, she knows that people need to nurture their souls. “Everyone should be treated with humanity and dignity,” she affirmed.

Her husband Werner said that it is important for practitioners to expose the CCP through such activities. Niklauda agreed, saying this might be the only way to raise awareness. She said she looked forward to seeing more events like this.

It Relates to All of Us 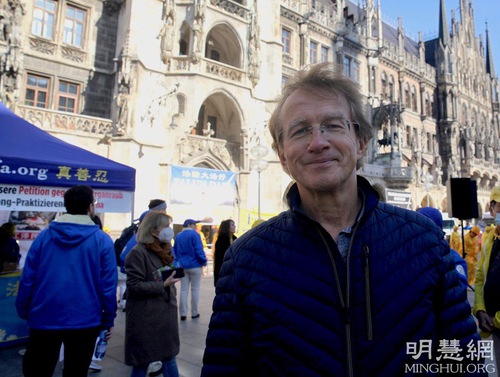 Norbert Decksteiner emphasizes the importance of the petition.

Norbert Decksteiner, who works for a bank, remarked, “The message here is clear. When tragedies like this occur, every one of us needs to act and stop the crime, because it relates to all of us.”

He added, “It’s terrible for the CCP to suppress Falun Dafa and the principles of Truthfulness-Compassion-Forbearance. Everyone should be allowed to choose their own way of living. Therefore, it is important to expose what is going on in China, especially the severe human rights violations. This will help Chinese citizens and the world.” 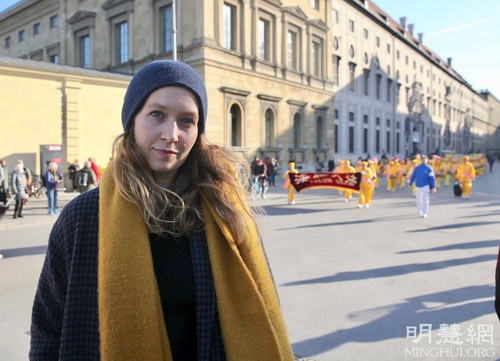 Leonie Priebke, a college student majoring in ethnology, is also a dancer. She found the practitioners’ performance very colorful and peaceful. Upon hearing about the mistreatment that practitioners have suffered in China for their belief, she immediately signed the petition.

“When a regime bans a peaceful meditation group like this, it endangers everyone’s human rights,” Leonie explained. She was very thankful that she saw the event, because otherwise she might not have known about this horror taking place in China.

Falun Dafa (also known as Falun Gong) was first introduced to the public by Mr. Li Hongzhi in Changchun, China in 1992. The spiritual discipline is now practiced in over 100 countries and regions worldwide. Millions of people have embraced the teachings—which are based on the principles of Truthfulness, Compassion, Forbearance—as well as five gentle exercises, and have experienced uplifted health and well-being.

Minghui.org has confirmed the deaths of thousands of practitioners as a result of the persecution over the past 22 years. However, due to the difficulty of getting information out of China, the actual number is believed to be much higher. More have been imprisoned and tortured for their faith.