(Minghui.org) Lisa Wang smiled and said, “I can now happily tell the world that I’m a Falun Dafa practitioner!”

She began practicing Falun Dafa in 2021 after more than a decade of twists and turns. It has been quite a journey for a self-described “Little Pink” – a term for young Chinese who actively defend the Chinese Communist Party (CCP) and attack Western democracies on the internet, to a Dafa practitioner. Here she shares her story.

Lisa came to Toronto in 2004 to study, and afterwards set up her own company. She said that, like millions of Chinese, she was biased against Falun Dafa because she did not really know what it was all about.

Lisa shared, “I believed the CCP’s propaganda, that Falun Dafa practitioners besieged Zhongnanhai (the CCP’s central headquarters) because they wanted to overthrow the Party – and that they are supported by the United States. I thought that Dafa practitioners are people who’ve lost their minds and hurt themselves and others. Practitioners can be seen around Toronto holding banners. Why? Some banners have messages like: ‘Stop the Live Organ Harvesting Of Falun Dafa Practitioners.’ For more than a decade, I did not believe anything they said.” 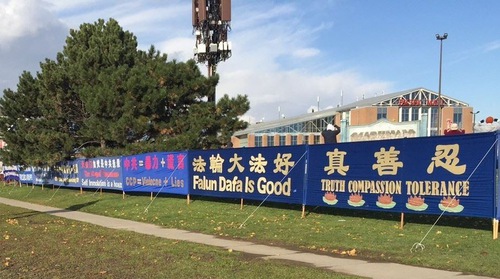 One of the truth-clarifying sites in Toronto that Lisa often sees, in front of the Pacific Mall 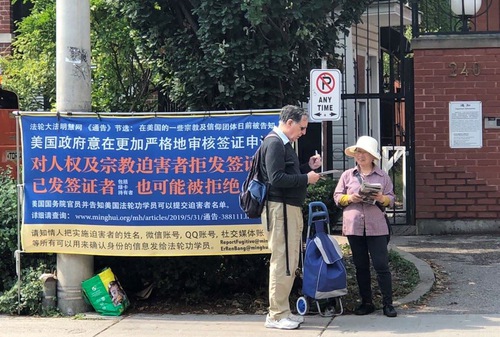 Practitioners talk to people about the persecution in front of the Chinese Consulate in Toronto. 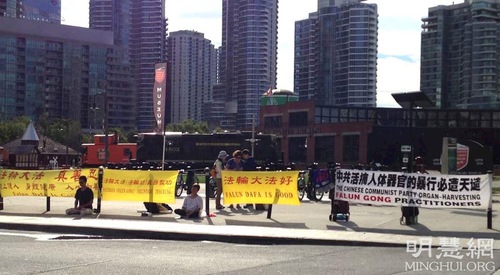 A truth-clarifying site at the CN Tower in Toronto 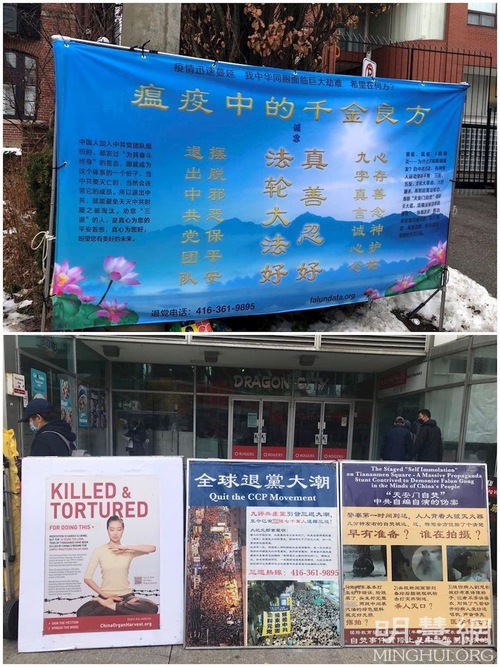 Lisa recalled an incident a decade ago: “I needed to go to the Chinese Consulate to settle some matters and I noticed Falun Dafa practitioners holding banners. They stood there every day and in all weather: spring, summer, autumn or winter. My friends were convinced that they had to have been paid to stand there. As I stepped out of the consulate, I met an elderly Falun Dafa practitioner distributing flyers. She handed me one and said, “Do not be deceived by the CCP…” I sighed, rolled my eyes and said loudly, “You’d better leave me alone being deceived!”

“Because my life was good, I did not understand or want to listen,” she said.

Lisa said that her prejudice against Falun Dafa was due to the CCP’s propaganda and, “Because I did not know any Falun Dafa practitioners. I did not care about the persecution.”

She said that the only thing she knew about Falun Dafa came from the CCP’s broadcasts of the Tiananmen self-immolation hoax of 2001: That year, all television channels across China continuously broadcast film footage of a person who appeared to be meditating while on fire until all his clothing was blackened. Although she was young at the time, Lisa’s memories of that scene are still fresh.

She said it didn’t seem to make sense. She wondered, “How could a person who appears to be burning like that still meditate without moving? The man did not appear to be in pain or struggle even though he was engulfed in flames!”

Lisa said, “Although I questioned the film footage, I was nevertheless influenced by the news reports and accepted what the CCP said. Actually at that time, I did not know anything about Falun Dafa. Whatever the Party said, I just believed it.”

What made Lisa change her mind?

After she left China, Lisa became open to new information. She said, “Falun Dafa practitioners have persisted in displaying banners and talking to people for over 20 years. In China, the news broadcasts terrible things about Falun Dafa – which I believed and accepted for years. So who exactly is lying? After I left China I started to think about this. I also searched the internet for information.”

Once, she talked to a friend who gave her some serious food for thought. Lisa recalled, “One of my friends told me that his classmate is an army doctor in the Guangzhou Army Region. This classmate told him what he saw. Initially, the CCP leaders told him that these harvested organs [for transplant surgery] came from prisoners who were sentenced to death. Because they committed crimes, these doctors shouldn’t have any ethical quandraries [about harvesting their organs]. Later, the number of ‘sentenced to death prisoners’ increased quickly, until the van used to transport the harvested organs just waited at the execution grounds.

“Once they shot the prisoner(s), the doctors immediately cut them open and removed the organs. Some of these people were not dead when their organs were harvested. For every organ harvesting surgery performed, the doctors were each paid 10,000 yuan. That was around the year 2000.”

Lisa said, “Initially, I’d wondered whether what Falun Dafa practitioners said was really true. I could not believe that the CCP actually committed such hideous crimes of removing organs while people were still alive and then selling them: Like, ‘Since you abide by the principles of Truthfulness, Compassion and Forbearance to be a good person, I will kill you’? That is a totally upside down world.”

How did Lisa finally embark on her cultivation path in Falun Dafa? She said, “Influenced by the CCP’s systematic propaganda, I was prejudiced against Falun Dafa and practitioners. But at work I had the chance to interact them. I observed that they were very serious and responsible. They are not competitive and are more conscientious than other people I worked with.

“In 2019 I really got to know a Falun Dafa practitioner. He is very logical in the way he talks and every sentence is not only reasonable, but full of compassion. After we had many discussions about cultivation, he lent me Zhuan Falun. I wanted to see for myself what this book was all about. Why did millions of people around the world practice Falun Dafa?”

Lisa shared, “I found it very easy to accept the things written in Zhuan Falun – such as what the book says about the cosmos. I researched the Theory of Evolution, chemistry, quantum mechanics, etc.,...The more I researched them, the more I discover that what Zhuan Falun says is actually very scientific. The book very logically explains the mysteries of the human body and the universe. I was in awe. No wonder the ultimate destination of science is theology.

“After reading about the heavenly secrets talked about in Zhuan Falun, I was so excited, I wept! Human beings can cultivate and become divine beings!”

In 2020, Lisa’s mother came to visit but could not return home due to the pandemic. Her mother had had surgery years ago to remove one side of her thyroid nodules. That area of her throat was bloated and uncomfortable. After surgery, the doctor told her to monitor that area in case it developed cancerous cells.

“One day in March 2021, Mom’s thyroid swelled, causing her to have difficulty breathing. She could not stop crying. This was the second time this happened and this time, she really could not stand the feeling of being suffocated. She was frightened and felt that she might die. I took her to the hospital, but due to the pandemic, only the patient could enter. Mother was frightened and did not want to go in alone. She does not speak English. We had no other alternatives, so we went home,” Lisa recalled.

“The Falun Dafa practitioner I know suggested that I ask mother to recite ‘Falun Dafa is good, Truthfulness-Compassion-Forbearance is good,’” Lisa continued. She felt it wouldn’t hurt to try. She told her mother, “I don’t know if saying these words will help or not. You can choose to continue suffering or try saying, ‘Falun Dafa is good, Truthfulness-Compassion-Forbearance is good. It’s your decision.” Her mother immediately began reciting the words.

That night, her mother said that her throat felt better and it no longer hurt to breathe. She was finally able to fall asleep. The next morning Lisa asked her mother, “How do you feel?” Her mother said, “I slept very well. My throat is no longer swollen. I even had a dream.” “A dream? What dream?” Lisa asked.

Her mother said that she dreamed a cloud of black matter floated away from her body. Lisa said, “That’s amazing! That’s just like the illness karma mass mentioned in Zhuan Falun. Is Master Li [the founder of Falun Dafa] helping Mother? I could hardly believe this – but this actually happened. Just by saying the words, my mother’s throat stopped swelling. The pain was gone and she could sleep. I had no choice but to admit that what is said in Zhuan Falun is true.”

Lisa’s mother continued reciting “Falun Dafa is good, Truthfulness-Compassion-Forbearance is good," every day and she kept feeling better. “A few days later, she had another dream. She saw a blue ray and a yellow ray of light. The gentle and warm rays were shining towards her. My mother does not know anything about faith, much less anything about the cultivation world.”

Lisa said, “Although Mother did not understand what she saw, she continued to recite ‘Falun Dafa is good, Truthfulness-Compassion-Forbearance is good’ every day. Two weeks later, I showed her Zhuan Falun. She read the book for a while and then fell asleep on the sofa. I left the room to do something. Suddenly, I heard her shout and I quickly rushed back to the room yelling, “Are you okay?” Mother said, “I felt like I just swallowed 2 balls. Someone pulled here (she pointed to her thyroid area) and cut it (nodules) off!” I was very happy and could not contain my excitement. I told her, ‘That is Master taking away your source of illness! You are going to be fine!’”

Lisa recalled that when her mother later experienced pain in the thyroid area, “I told her that she was eliminating her karma. ‘You do not have any illness,’ I said. After Mother returned to China, she had a complete checkup and the doctor told her that everything was fine. Mother continues to recite ‘Falun Dafa is good, Truthfulness-Compassion-Forbearance is good’ every day.”

Lisa sighed and said, “When I was a child I kept wondering, ‘Life is so hard, why am I here?’ Although I was still very young, I felt I didn’t belong here and I yearned to leave. A person’s thoughts are very complicated. We all spend our lifetimes seeking reputation, money and satisfying relationships. If we can get beyond all this wouldn’t that be what I kept looking for?

“After I began reading Falun Dafa’s teachings, I believe in the existence of those mysteries and heavenly secrets that ancient people talked about. I also deeply understand why practitioners would rather lose their lives than give up cultivation. Dafa is true science, Dafa is logical. Dafa is also supernormal and limitless. This is what Master said, revealed to me!”

Lisa has begun doing the exercises with other practitioners every day. She also participates in activities to clarify the truth to people.

Lisa concluded, “I went from being a ‘Little Pink’ to practicing Falun Dafa – my understanding grew from scientific to perceptual and later, from perceptual to rational. Every step was not easy. I now understand the purpose of my coming to this world. Only by doing well in what I am supposed to do based on the principles of Truthfulness, Compassion and Forbearance will I be able to find my true self and return to where I came from.”

She smiled, “Now I can finally say that I am a Falun Dafa practitioner!”