(Minghui.org) Today's news from China includes incidents of persecution that took place in 11 cities or counties in 7 provinces, where at least 36 practitioners were recently persecuted for their belief. 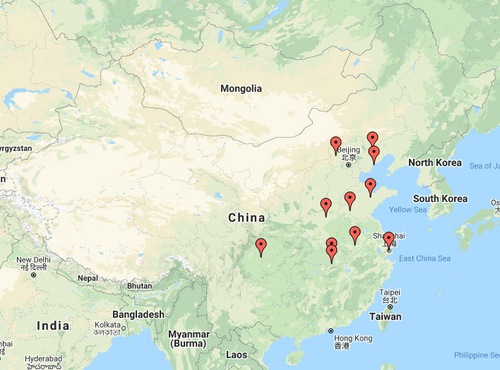 It was recently reported that on October 16 the Zhangjiakou City Court upheld the original verdicts without holding a hearing or notifying the practitioners’ families. The four practitioners were taken to prison on October 19, but their families were not notified.

Ms. Liu was taken to the Jidong Prison. The other three practitioners were taken to the Shijiazhuang Women’s Prison.

Ms. Xu Jianying from Zhucheng Sub-district, Xinzhou District, was arrested in September 2021. She was sentenced to one year in prison.

Numerous practitioners were arrested by the Chaoyang City Police Department on September 8, 2021. Their cases were brought to the Lingyuan City Court.

Mr. Wang Lidi, a teacher at the Hubei University of Science and Technology, was “talked to” by 610 Office staff members, who pressured him to sign or press his fingerprints on a document promising that he would not tell his students about Falun Gong. He refused to cooperate. They also threatened to dismiss Mr. Wang and send him to prison again.

Ms. Sun and her non-practitioner husband, who live on Yuanfei Road, in the No. 10 Middle School residential section, Kuiwen District, were arrested by officers from the Changyi Police Department on the afternoon of November 4, 2021.

Mr. Wu Wei has been missing for two months.

Ms. Xiao Guilan and Ms. Deng Zhongqin were harassed by community management office staff members at the end of October 2021. The staff members called to harass the children of Ms. Xiao and Ms. Deng. Li Weizhi and Yang Guihua (their genders are unknown) were also harassed over the phone by these staff members.

Three Party members from the Jingui Community Management Office carried a bucket of cooking oil to Ms. Tang Gangying’s home on November 1. They pretended to be kind and helpful in order to get Ms. Tang to sign paperwork. Ms. Tang declined their demand with righteous thoughts.

Mr. Guo Hongshan was tried at the Changli County Court on the morning of November 2, 2021.

Mr. Wang Jianwei and elderly Ms. Song were arrested around October 26, 2021. Their homes were ransacked. They are held in the Zhengzhou City No. 3 Detention Center.

Ms. Zhao was arrested and her home was ransacked.