Home > Persecution > Accounts of Persecution
Once Sentenced to 14 Years, Older Man Gets Another 4.5 Years for His Faith
Nov. 26, 2021 | By a Minghui correspondent in Heilongjiang Province, China

(Minghui.org) A 72-year-old Mudanjiang City, Heilongjiang Province resident was recently sentenced to prison for practicing Falun Gong, a spiritual discipline that has been persecuted by the Chinese communist regime since 1999. Mr. Wang Xinmin has appealed the verdict. 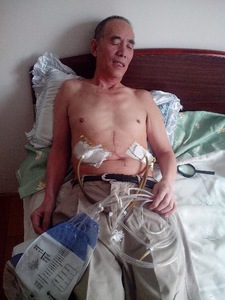 Mr. Wang Xinming at the time he was released on medical parole in June 2014

Mr. Wang was arrested on June 10, 2021 during a police sweep. The authorities claimed that the purpose of the group arrest was to “maintain security” in light of the upcoming July 1 centennial celebrating the founding of the Chinese Communist Party.

He was held at the Mudanjiang Detention Center. The authorities refused to release him even though his high blood sugar levels were very high.

Mr. Wang appeared in the Aimin District Court on October 29. He entered a not guilty plea for himself. He was recently sentenced to 4.5 years with a 5,000 yuan fine.

This is the second time that Mr. Wang, a retired senior agronomist for the Heilongjiang Tobacco Research Institute, has been sentenced for his faith in the past two decades.

He was previously arrested on October 22, 2003, and sentenced to 14 years in Mudanjiang Prison. He developed severe pancreatitis in early 2014 and was released on medical parole in June 2014. Before he fully recovered, he was taken back to the prison on June 4, 2015, and held there until 2016.

Having Been Incarcerated for Over a Decade, Older Man Detained Again Despite Medical Condition