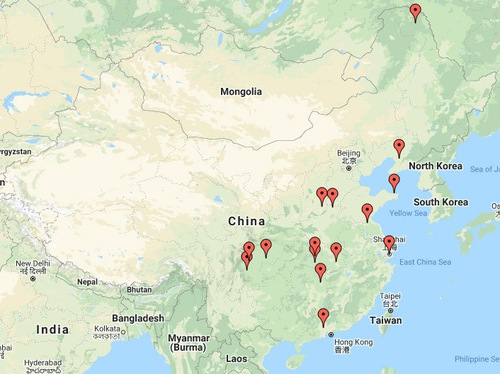 Mr. Bai Xuesong, 48, has been held in the Anshan City No. 2 Detention Center for over nine months. He was scheduled to be tried by the Lishan District Court, Anshan City, at 1 p.m. on November 8, 2021.

Mr. Bai was arrested at his friend’s home on January 12, 2021. The police fabricated a case against him. They also beat him severely.

Ms. Wang Xiubo from Hanjiayuan Town was sentenced to one year and six months in prison in late October 2021.

Zhang Chunhe (gender unknown) from the Zengcheng District was scheduled to be tried by the Haizhu District Court on November 15, 2021.

Ms. Wang Ruling, 76, from Feilong Residential Community, was arrested at home by officers from the Xijiao Police Station, Luzhou District, around 12 a.m. on June 15, 2021.

Ms. Wang has been held in the Luzhou District Detention Center for four months. Her case was brought to the court, and she is facing trial.

Officers including Xu Jun from the Xinhe Police Station, Kaifu District, broke into 76-year-old Ms. Chen Yuhua’s home on the morning of August 31, 2021. They handcuffed and restrained her, and did not allow her use the restroom.

They confiscated 12 Falun Gong books, 29 amulets, 38 copies of Minghui Weekly, 18 CDs, and 500 yuan in cash. Officer Xu threw a framed photo of Falun Gong founder to the ground, smashing and trampling on the broken glass. He then removed the photo.

Afterwards, they took Ms. Chen to the police station for interrogation with transcripts. The officers gave her 10 days of administrative detention, which was not served due to her age. She returned home two hours later.

Ms. Liu Yu’e from Songzi City was scheduled to be tried on the morning of November 1, 2021.

Ms. Yang Hua was pressured to sign paperwork by the police and staff members of the sub-district administration office on October 30, 2021.

Ms. Zhong was reported to the police by Li Guiming when she was talking to Li about Falun Gong in Chezi Town in May 2018. Officers from the Chezi Town Police Station arrested her.

Ms. Zhong was taken to the hospital and forced to take a blood test. She was prosecuted again and sentenced to three and a half years in prison. She was held in the Longquanyi Women’s Prison and returned home on September 9, 2021.

During the six and a half years Ms. Zhong spent in prison, the Wutong District Social Security Bureau deducted more than 70,000 yuan from her pension. On October 21, 2021, people from the Guanying Township government and the police station went to her home. They threatened her and pressured her to sign paperwork to say that she was “transformed” (forced to renounce her faith).

On the morning of October 22, director Xu Yingtang of the police station, village director, and village Party secretary Chen Xin again pressured Ms. Zhong to sign paperwork in exchange for receiving her pension. Ms. Zhong clarified the truth to them, but they refused to listen to her.

Ms. Wang Fengxian from Linzhou City was arrested by officers from the Hejian Town Police Station on October 15, 2021. She was taken to Anyang City. Her current whereabouts are unknown.

Ms. Liu Meiying, in her 70s, from Weiye No. 1 Village, Laiyang Road, Hudong Sub-district, Pudong New Area, was monitored and followed during the CCP’s “sensitive days,” including various anniversaries and when Party leaders gathered for meetings. This harassment disrupted her and her family lives.

Mr. Hu Xiancai and Ms. Feng Guiqing from Qingliu Town, Xindu District, were arrested and taken to the Qingliu Town Brainwashing Center by village officials and staff members of the brainwashing center on October 26, 2021.

Ms. Wang Hua and Ms. Nan You from Xishui County were reported to the police by a college student and his mother for talking to people about Falun Gong near Nancheng Towel Factory in Qingquan Town on the morning of October 29, 2021. The two practitioners were arrested by officers from the Nancheng Police Station. The officers ransacked their homes and confiscated a printer, a laptop, and over 40 Falun Gong books from Ms. Wang’s home. Ms. Wang was still breastfeeding. She was released at 4 p.m. Ms. Nan was detained for 15 days.

Four officers from the Yingshan County Police Department went to the home of Ms. Cai Zefang, who was in her 80s, around 8 p.m. on October 29, 2021. They pressured her to sign paperwork, but she refused.

The officers spent over an hour at her home until after 9 p.m. They threatened that if she did not sign, they would visit her every day.

Ms. Fan Mei, Ms. Zhang Chuanhua, and Ms. Lu Xiaoyan from Zhongxiang City were harassed by people from the 610 Office, Domestic Security Division, police station, and village committee. This group of people forcibly photographed the three practitioners and pressured them to sign the three statements. The practitioners clarified the facts about Falun Gong to them on numerous occasions, but they refused to listen and kept harassing practitioners.

“Is Minghui Merely a Free Resource?”