(Minghui.org) We do the Falun Dafa exercises in the beautiful Golden Gate Park from 9 to 11 a.m. every Saturday and Sunday morning. I would like to tell you some stories from our exercise site.

San Francisco’s Golden Gate Park is a famous attraction that draws both local residents and tourists from abroad. With 1,017 acres of public grounds, it is 20% larger than New York’s Central Park. Despite the pandemic, many locals bring their children for walks or to play. They also come to jog or ride their bicycles. The place is bustling with activity. 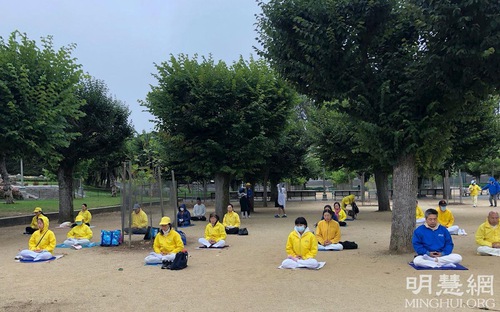 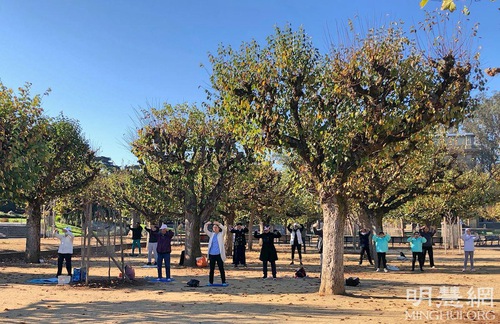 We practice the exercises and tell people about Falun Dafa at Golden Gate Park every Saturday and Sunday.

Doing the Falun Dafa exercises as a group is one of the cultivation forms that Master Li, the founder of Falun Dafa, gave us. Master said, “Our best method for spreading the Fa is for everybody to do the exercises in groups.” (Teachings at the Conference in Switzerland)

I give out flyers and ask people to sign a petition to end the persecution of Falun Dafa by the communist regime in China. We have display boards and illustrations of the five sets of exercises. Drawn in by the serene exercise music, many people stopped to read.

We also have a display board about the petition, including a pen and disinfectant for people to use after signing the forms. We put small lotus flowers on the board for people to take. Many times when I was telling one group about Falun Dafa, other tourists would walk over and sign the petition themselves.

I realized that I always gain something whenever I come to the practice site. Master leads predestined people to me. There are people from China who agreed to quit the Chinese Communist Party (CCP) and its youth organizations after understanding the persecution, and some people are interested in learning the exercises.

One day I noticed a young Chinese man watching us practice the exercises from afar. I walked over and asked if he had heard of Falun Dafa. He replied, “Of course.” I told him that the self-immolation at Tiananmen is a hoax used by the CCP’s state-controlled media to incite hatred against Falun Dafa. We chatted and he asked many questions. I answered them one by one, and in the end he quit the CCP organizations he had joined.

Elderly Chinese Learns the Exercises and Shares Her Discovery with Friends

Another day an older Chinese woman sat quietly watching practitioners do the exercises. I walked over and said, “Auntie, how are you? We are practicing Falun Dafa.” She immediately said, “Yes, I know. I know about Falun Dafa and I support you!”

We started to chat. She said she really wanted to do something to improve her physical condition, so she practiced tai chi, but her health did not improve. I said, “Do you want to try practicing Falun Dafa? The exercise movements are easy to learn and the effect is very good.” She said, “Maybe next time.” I did not give up and added, “Actually the movements are very simple. The first set of exercises only takes a few minutes. Do you want to try?” She said, “Okay.”

I taught her the first exercise. She said she felt very good. I said, “The third exercise is also very simple. Let me show you.” I showed her the third and fourth exercises and she did them very seriously. She was very excited and said the right side of her body no longer ached.

I told the woman that Falun Dafa is different from other qigong practices in that one should not only do the exercises but also read the teachings and follow them to be a better person. She said she had poor vision and couldn’t read easily. I gave her recordings of Master’s lectures and suggested that she listen to them instead.

We kept in contact. She said that after listening to Master’s lectures, she understood many things, and the more she listened, the more she wanted to listen. She told me that her husband had a bad temper. She was angry at first but after listening to Master’s lectures, she understood that she needed to be tolerant, not angry. I am really happy for her.

A Chinese lady from Indonesia comes to walk in the park every weekend. She always stops and watches practitioners do the exercises. I told her how good Falun Dafa is. We chatted for a long time. One weekend she said she wanted to practice, so I taught her the exercise movements. She said she felt very comfortable.

Because she needed to look after her bedridden husband, she could not persist in coming to practice the exercises. However, every time she does, she brings us face masks or sweets. She is very kind. I think that no matter what, she has formed an affinity with Falun Dafa.

Doctor: Forced Organ Harvesting in China Must Be Stopped

When I told a doctor who had stopped by that the CCP is still killing Falun Dafa practitioners for organs as part of the persecution, she was alarmed. I gave her a DVD on the subject, and she said she would definitely watch it and share it with others. She said that this crime must be stopped.

Another Westerner who understood the nature of the CCP said, “I hope this evil party will fall soon. Once it does, I will go out and celebrate!”

New Practitioner: It Is Better To Come Out and Practice Together

A Chinese lady found out about our Golden Gate Park practice site from Falundafa.org and contacted me. She told me that she had already been practicing Falun Dafa at home for over a year. She discovered Falun Dafa on the Internet, read Minghui.org and understood that Falun Dafa is good, unlike what the CCP claims. She said, “Such a good practice! I also want to practice.” She learned the exercises by following the videos on the website.

She used to suffer from an old neck injury. When she first began doing the exercises, her neck would twist and move by itself. She understood that Master was adjusting her neck and that her old injury is now resolved.

She also told me that when she first started doing the fifth exercise, she could only meditate for 15 minutes. Later, she read about other practitioners’ experiences on Minghui.org and pushed herself to meditate for longer. When she tried to sit for 45 minutes, her legs hurt so much that she couldn’t take the pain anymore. She thought of asking Master for help. Instantly, she felt an energy surrounding her. Her legs stopped hurting as much, and she managed to meditate for the full hour!

I also tell people who come to do the exercises that we have an English study group that meets online every night and that anyone is welcome. Some of them joined in. I feel that it is really not easy for people now to take up Dafa and cultivate, but it is heartening that they have already formed an affinity with Dafa. I’m very happy for them!

“Amazing Recovery from Stroke After Taking Up Cultivation”