(Minghui.org) Today's news from China includes incidents of persecution that took place in 16 cities or counties in 7 provinces, where at least 27 practitioners were recently persecuted for their belief. 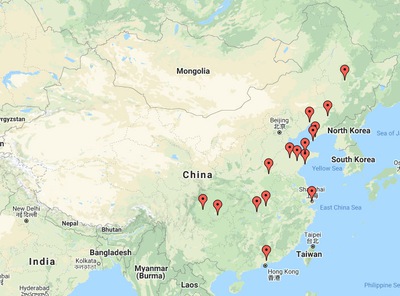 The Yanjiang District Court held a second hearing against Ms. Dong Yuying, 71, on October 9, 2021. She was sentenced to three years in prison and is being held in the Anyue County Prison.

Ms. Dong was tried for the first time on August 17. The prosecutor demanded a heavy sentence on the grounds that Ms. Dong continued to hold onto her “thought.”

Mr. Wang Xiaoming, 50, an outstanding police officer at the Xinbin Police Department, was dismissed by police department leaders, including Liu Hanbo, on July 31, 2021.

Mr. Wang applied for administrative review in the public security system, discipline inspection commission, and supervision organization. He went to the Letters and Complaints Office of the Ministry of Public Security and other relevant departments. The review documents were returned to the local authorities and were sent back to the Xinbin County Police Department.

In the first few months, almost every one of these department leaders took turns pressuring Mr. Wang to submit a resignation letter. Subsequently, Xinbin County Disciplinary Inspection Commission and County Party Committee staff members, among others, also took turns to have a talk with Mr. Wang preparing to fire him based on the information they were gathering.

Mr. Bao Yirang from the Zhoucun District was arrested on November 11, 2020, and was held in custody for a month. He suffers from kidney disease and has been undergoing dialysis treatment in the hospital.

Ms. Wang Li and Ms. Cui Hongwei were each sentenced to seven years in prison.

Ms. Liu Chengying, 74, was sentenced to one year and two months in prison by the Fengxian District Court.

Mr. Meng Xiangbiao was reported to the police on September 12, 2021, for distributing a special edition of Three Withdrawals, Nine Commentaries on the Communist Party, and other truth-clarifying materials to storefronts.

More than twelve officers led by the director of the Tongxiang Police Station broke into Mr. Meng’s home at noon on September 13. They ransacked the place and confiscated Falun Dafa books and printed materials. Mr. Meng was arrested.

For two days the officers pressured Mr. Meng to admit what he did was wrong. Mr. Meng did not cooperate, gave no confession, and did not sign anything. He was taken to the Lankao County Detention Center on the afternoon of September 14, for 13 days of detention.

Ms. Jin Lichun from the Pulandian District was arrested near Tiexi Primary School by officers from the Jiushou Police Station on October 23, 2021.

It was recently reported that Ms. Liu Hui, Ms. Zhang Jinsheng, and another practitioner were tried and sentenced to eight years in prison in June 2021.

Liu Shenghua (gender unknown) was reported to the police for talking to people about Falun Gong in Zhuhe Town on October 25, 2021. Officers from the Zhuhe Police Station arrested Liu, whose whereabouts are currently unknown.

Mr. Du Zhentian was officially placed under arrest on October 20, 2021. His case was turned over to procuratorate. He is being held in the Longkou City Detention Center.

Practitioner Juanjuan (surname and gender unknown) from Jianghan District was arrested around October 24, 2021, for talking to people about Falun Gong.

Ms. Wang Ruifeng from Heishan County was arrested on May 12, 2021. She was placed in criminal detention and taken to the Jinzhou City Detention Center by the Heishan County Domestic Security Division. She was prosecuted by the Linghai City Procuratorate, which sent her case files to the Linghai City Court. It was reported that the court would try her in early November.

Ms. Wang was previously sentenced to five years in prison in 2014. She was held in the Liaoning Province Women’s Prison and returned home in 2019. She had just been placed in criminal detention for 15 days in April 2021 before she was arrested in May.

Elderly Ms. Zhang and Ms. Lu from Zhuanghe City were arrested while talking to people about Falun Gong at a bus station on the morning of October 25, 2021. Ms. Zhang’s home was ransacked. Further details are not available.

Ms. Han Zonglan from the Tongliang District in Chongqing was displaced. She went to live with her sister in the same city. She was arrested by Tongliang police. Her whereabouts are unknown.

In recent days, her family learned that she would be tried at the Jiangbei District Court on October 28, 2021.

Ms. Shao Guiqiu from Huangdao District was arrested at home by the Domestic Security officers two or three days ago. The reason for her arrest is unknown and her whereabouts are being investigated.

“Master Li Is By My Side”