(Minghui.org) Today's news from China includes incidents of persecution that took place in 12 cities or counties in 8 provinces, where at least 18 practitioners were recently persecuted for their belief. 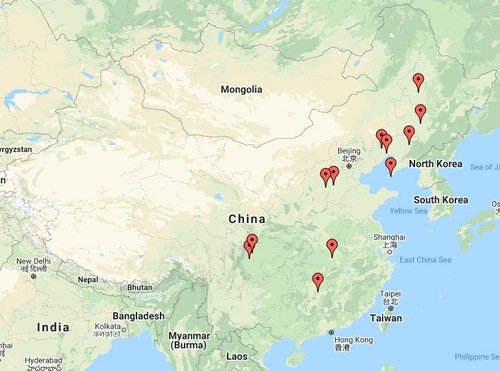 Ms. Liu Yujuan from Chaoyang County was arrested at home by officers from the Boluochi Police Station on September 28, 2016. She was held in the Chaoyang City Detention Center. The public security, procuratorate and court system collaborated in handing her a stiff seven-year-prison term.

By 2018, Ms. Liu had spent more than two years in the detention center, where she was abused and developed serious illnesses. She had three tumors in her abdomen, including one in her womb. She had to press on the tumor with her hands to help her defecate.

Despite her serious illness, Ms. Liu was still forcibly taken to the Shenyang Women’s Prison, where she continued to be abused.

In order to continue to imprison Ms. Liu, the prison officials told her family to pay for her surgery. Ms. Liu did not recover from the surgery. She remained imprisoned and was forced to engage in hard labor. Her blood pressure readings reached as high as 280 to 290 mmHg.

Mr. Zhou Li, Mr. Wang Bingcheng, and Mr. Liu Peng were arrested and their were homes were ransacked on October 9, 2021.

Mr. Geng Jianxin from Pingding County was arrested on October 17, 2021, by people from the Yangquan City Police Department, Domestic Security Division, and the 610 Office, in collaboration with the Pingding County Police Department, Domestic Security Division, and 610 Office. The couple were taken to a brainwashing center near Yangquan City No. 3 Hospital.

Ms. Jin’s daughter went to the police department. The officers told her to sign the paperwork. She was afraid that her mother would be persecuted, and signed. After signing, she and her mother returned home.

Ms. Wang Lijun from Jiahe Town, Jinpu New Area, was in Anshan City. Officers from the Jiahe Town Police Station tracked the location of her cell phone on the afternoon of October 22, 2021, and arrested her. She was detained for 10 days.

Ms. Li Defang from Pengzhou City was arrested at home on October 18, 2021. Her current whereabouts are unknown.

Officers including Fu from the Longfeng Street Police Station went to the homes of Ms. Zhang Cuixian, Ms. Zeng Fanfeng, and Ms. Lei Zhoulan in Mamuhe Village past 3 p.m. on October 21, 2021. The officers harassed the three practitioners and photographed them.

Ms. Song, in her 70s, and another female practitioner, in her 80s, were studying Falun Gong books together on October 15, 2021, when five plainclothes police officers knocked on the door, broke into the room, and ransacked the place. They took Ms. Song to the Hongwei Road Police Station.

Ms. Song was forced to write guarantee statements to renounce Falun Gong and was held in the Ganghua Police Station for one day. Ms. Song has since been displaced, and her whereabouts are unknown.

Ms. Qiao Yingxia was arrested and held in the Jinzhou City Detention Center for 15 days.

Community directors Li and Wang and other people went to Ms. Hong Shanyu’s home on October 18, 2021. They pressured her to sign guarantee statements renouncing Falun Gong, which she refused.

Mr. Yang Daifu, in his 70s, from Huangxu Town, Jingyang District, was arrested at home by over 30 police officers on April 22, 2021. The officers ransacked his home and confiscated Falun Dafa books, photos of the founder of Falun Gong, a computer, a printer, printed materials, supplies, and other items.

Mr. Yang was taken to the Mianzhu City Detention Center that evening. The detention center refused to admit him for health reasons. He was then released on bail by the Jingyang District Domestic Security Subdivision.

“I Became a Better Daughter-In-Law Through Cultivation”