(Minghui.org) The 102nd annual New York City Veterans Day Parade was held on November 11, 2021, to honor veterans, raise awareness of those who serve them, and salute members of the currently serving military. Falun Dafa practitioners were once again invited to participate and proved to be a big hit with spectators and organizers alike. 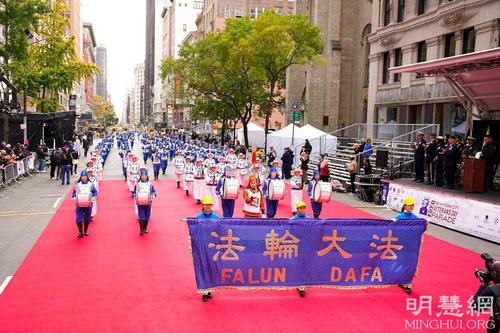 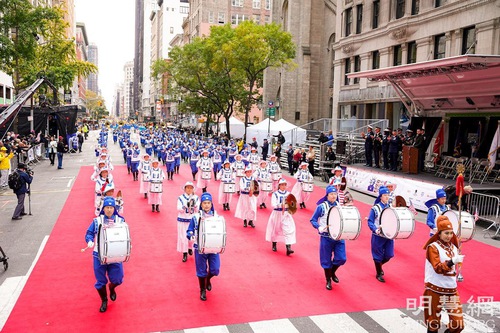 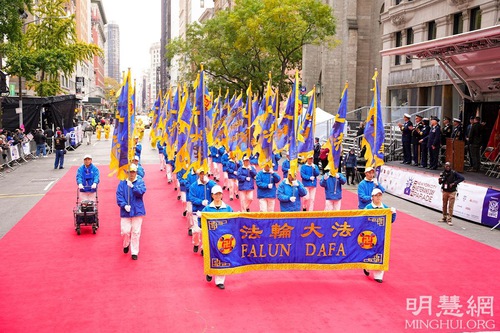 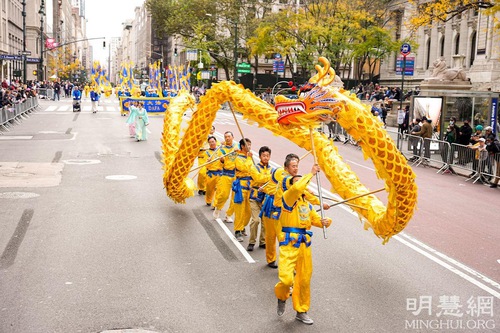 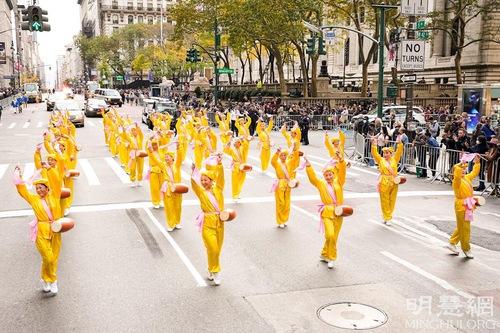 The New York City Veterans Day Parade is the largest Veterans Day parade in the United States. Nearly 200 groups participated this year. Last year, the parade was canceled due to the COVID-19 pandemic. The 2021 parade marked the 20th anniversary of the response to the terrorist attack of September 11, 2001 and the start of the global war on terrorism, and the 30th anniversary of Operation Desert Storm. The parade route was the same as in previous years, along Fifth Avenue in Midtown Manhattan, from 25th Street to 40th Street.

This is the seventeenth year that Dafa practitioners have participated in the Veterans Day parade, and their presence has become a unique part of the parade tradition. As soon as the Tian Guo Marching Band appeared, people on both sides of the street began taking pictures, cheered, applauded, gave the thumbs up, and waved the U.S. flag. With a bright smile, one woman kept excitedly saying: “I love it! I love this team!” She said their performance touched her heart. The band performed the music Falun Dafa Is Good, The Sacred Song, and Stars and Stripes Forever. Their music was warmly applauded along the entire parade route.

Immediately behind the band came the Falun Dafa flag team, followed by practitioners demonstrating the exercises. The dragon dancers and waist drummers rounded out the Falun Dafa contingent.

“Over the past two decades, Falun Dafa practitioners have peacefully protested the Chinese Communist Party’s (CCP) persecution and defended freedom of belief. Their efforts have won the recognition of parade organizers and residents of New York. Practitioners have been invited to participate in the parade every year. Practitioners love peace and have shown people they have tenacity and courage, which complements the spirit of veterans.”

Organizer Publicly Thanks Practitioners for Participating

When the Tian Guo Marching Band marched up to the red carpet and paused in front of the rostrum, the organizers – the United War Veterans Council, asked the band to stay and finish performing The Stars and Stripes Forever.

The dignitaries on the rostrum applauded for a long time. The parade emcee introduced the Falun Dafa contingent with, “This is the Falun Dafa group. They are long-term supporters of veterans. Thank you very much Falun Dafa for participating in the 2021 New York Veterans Day Parade!”

Zhou Wenwen, conductor of the New York Tian Guo Marching Band, said, “These veterans have made great contributions to the country. Our band shares with everyone the grace of Falun Dafa in the form of a military-style band.”

During the parade, the Tian Guo Marching Band performed a number of compositions with a stirring blend of trumpet, horn, tuba, baritone, clarinet, saxophone, flute, and drums.

At the intersection of Fifth Avenue and 30th Street, Diana Hodges was excited to see the band. She danced and waved the U.S. flag in time to the music, exclaiming, “I love it!”

Ms. Hodges pointed to her heart and said, “Oh, my God! It (the music) shook my heart! It touched the hard-to-reach part of my heart. This makes me so excited. Thank you! This music is from heaven. This is a divine connection.”

Ms. Donski took a leaflet about Falun Dafa and said, “The Falun Dafa team is very beautiful. I really like it. Thank you for sharing!”

“Podcast (Cultivation): “Japan: My Cultivation Experiences Clarifying the Truth at Immigration Services and the National Diet””