(Minghui.org) Since the start of the 26th United Nations Climate Change conference (COP26) held in Glasgow, Scotland, Falun Gong practitioners have been going to the conference venue and other large scale events to raise awareness of the ongoing persecution of their faith in China. 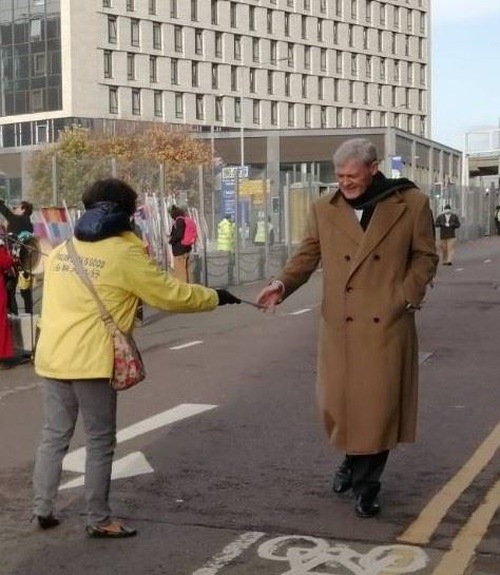 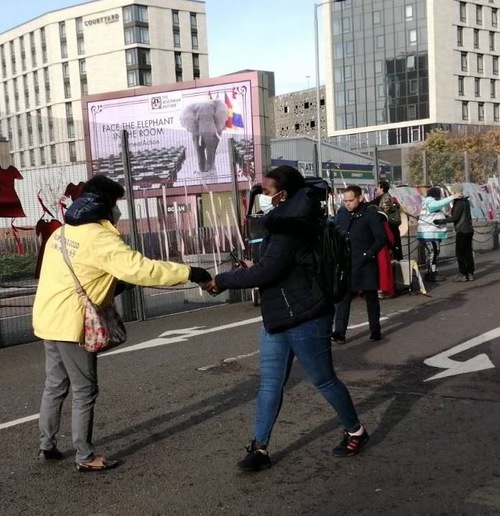 Practitioners hand out information outside the COP26 conference.

On November 10, 2021, the well-known newspaper The Scotsman filmed a special feature on Falun Gong practitioners and their peaceful resistance against the persecution in China. In the video, Falun Gong practitioner Stepan explained why he took up the mind-body practice, why he came to take part in peaceful protests every day during the COP26 conference, and why the Chinese Communist Party (CCP) is brutally persecuting Falun Gong.

A screenshot of the report by The Scotsman

Stepan told the reporter, “Five years ago, I received a flier about Falun Gong. I liked the principles Truthfulness, Compassion, Forbearance and started to practice it. My character improved tremendously. I quit smoking, drinking and gambling. Falun Gong has been a great help in improving my mental health. I feel more relaxed. To me, this is a journey of spiritual awakening.”

He also said, “I came here to support what I practice and the universal values of Truthfulness, Compassion, Forbearance it teaches. I want to tell people we have a meditation exercise and help people understand the CCP’s persecution in China. The regime does not like the values promoted by Falun Gong. In 1999, there were 100 million people practicing Falun Gong in China. The Chinese regime saw it as a threat to their power and thus launched the persecution.”

The Scotsman also mentioned in its video, “Forced organ harvesting from Falun Gong practitioners and other political prisoners in China has raised increasing concern within the international community. The regime executes ‘on demand’ in order to provide organs for transplant to recipients.”

The feature also reported, “Organ harvesting by the CCP has drawn attention and public condemnation from other governments, international organizations and medical societies.” They include the parliaments of Canada and the European Union, as well as the U.S. House of Representatives. “Several countries have also taken or considered measures to deter their citizens from traveling to China for the purpose of obtaining organs,” it continued.

The report concluded, “In December 2018, an independent tribunal in London concluded ‘unanimously, and sure beyond reasonable doubt—that in China forced organ harvesting from prisoners of conscience has been practiced for a substantial period of time involving a very substantial number of victims.’”

Raising Awareness of the Persecution at Public Rallies

During the COP26, Falun Gong practitioners also held activities to raise awareness on the ongoing persecution at two public parades and rallies.

One of them was at a parade on November 6 with around 100,000 people from all over the world. Practitioners came to the starting point, Kelvingrove Park, early in the morning and hung up information boards so that people at the parade could see them.

Karen and several other practitioners also walked in the parade to give out fliers. She said many people held out their hands to ask for the information. She estimated that within a short period of time, she distributed around 2,000 brochures. A doctor told her he went online to sign the petition to support Falun Gong after reading the information.