The event took place at the Chase Park Plaza in St. Louis on November 6, 2021. It was the third annual “Victims of Communism Memorial Day” event hosted by the St. Louis Commission.

From the Soviet gulags to present-day China, communism has caused caused over 100 million unnatural deaths worldwide. And countless people have been subjected to exploitation, violence, hunger, and many other untold abuses.

The 100-year anniversary of the Bolshevik Revolution took place in Russia on November 7, 2017. Former U.S. President Trump declared the day as National Day for the Victims of Communism, to remember those who died and who continue to suffer under communism. 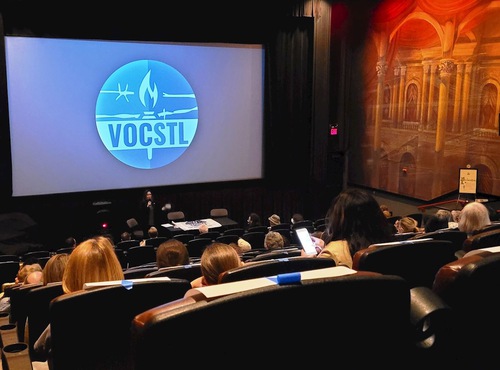 The Victims of Communism Memorial Day event in St. Louis on November 6, 2021

The memorial event in St. Louis highlighted the communist oppression in Poland, Venezuela, Cuba, and China, featuring short films, including one about the persecution of Falun Gong, and a panel discussion from persecution survivors and local experts.

Two Falun Gong practitioners, Mr. Sam Geng and Ms. Karen Tian, were invited to share their stories at the event. Mr. Geng shared that because he didn’t give up practicing Falun Gong, he was denied his doctoral degree and detained multiple times. Several of his teeth fell out from force feeding while he was in custody. One of his family members was tortured to death while serving a three-year labor camp term for practicing Falun Gong. Two of his friends also died because of the persecution.

Ms. Tian, a survivor of the Cultural Revolution in China, shared that she was alarmed to see how communism and the persecution of Falun Gong has spread to the U.S., including the communist infiltration into the local community in St. Louis.

Several event attendees said they were shocked to hear about the persecution of Falun Gong. One person said that he was impressed with how Mr. Geng persevered after suffering so much, and that he was interested in learning more about Falun Gong.