(Minghui.org) Today's news from China includes incidents of persecution that took place in 17 cities or counties in 10 provinces, where at least 38 practitioners were recently persecuted for their belief. 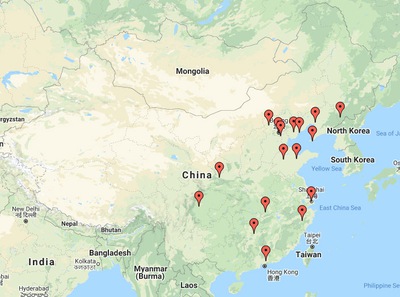 Ms. Xuan Lifen was arrested around 7:00 p.m. on October 18, 2021. Someone reported her when she talked to people about the persecution of Falun Gong on the bus heading to a hospital. She was detained for 12 days.

Her mother-in-law passed away on October 25, 2021. Although her husband is the only son, the officers from the local police station did not let her go home and help arrange the funeral. Her husband has to delay his mother’s funeral until she is released.

Mr. Zhao Tianhua, Mr. Chen Hualiang, and Lian Yueguang (gender unknown) are held at the Boluo County Detention Center. Their hearings were held in the Boluo County Court between 10:30 a.m. to 1:00 p.m. on October 28, 2021. Their attorneys pled their innocence.

They were arrested along with Ms. Cai (Mr. Zhao’s wife, first name unknown), Mr. Peng Jian, and Ms. Wang Lifei by officers from the Yuanzhou Town Police Station and the Domestic Security Division on the afternoon of May 11, 2021. Mr. Peng, Ms. Wang, and Ms. Cai were detained for 37 days and released in mid-June.

Six officers from the Changyi Police Department, the Beimeng Police Station, and the Taibaozhuan Police Station went to Mr. Chen Shougui’s home on October 20, 2021. He was not at home. They arrested his wife, seized his Falun Gong books, a picture of the founder of Falun Gong, and a satellite receiver. His wife was released the next day. He has been staying away from home to avoid persecution.

Ms. Wang Jinxia, Mr. Tian Fuliang, Ms. Wang Wenmei, and Ms. Guan Rui of Wei County were arrested by officers from the Xijiao District Police Station on October 27, 2021, after someone reported them when they distributed Falun Gong flyers in Chenzhuang Village, Nanjiao District, Datong City. They were held in the Zhangjiakou City Detention Center. Their homes were ransacked.

Ms. Wang Wenmei was released on October 29 because her blood pressure was as high as 250 mm Hg. Ms. Guan was released 15 days later. Mr. Tian and Ms. Wang Jinxia are being held in the Hunyuan Detention Center.

Ms. Zhao Hongxing was arrested at home by officers from the Jiangtanlu Police Station, the Weibin Police Department, and the Gaojia Town Judiciary Office on the morning of October 28, 2021.

Ms. Yuan Meiyun was harassed at home by community deputy secretary Tan Zemin and three clerks on the morning of October 19, 2021. They ordered her to "transform." She refused. They seized several drawings with information about Falun Gong that was hanging on the wall.

Ms. Liu Hongxia was arrested on October 28, 2021. Her whereabouts are unknown.

Ms. Chen Fang was harassed at her store by officers from the Wenquansanhaoqiao Police Station and clerks from the Baicha Village Committee at noon on October 27, 2021. They ordered her to renounce Falun Gong. She refused.

Around 4:00 p.m., they had her aunt sign a document renouncing Falun Gong. The names signed on the document were Chen Fang and Yu Jinguang, (the name of Ms. Chen’s husband).

Ms. Jin Feng of Huzhen Town was arrested at work by officers from the local police station and town cadres on April 7, 2021. She is being held at the Lishui City Detention Center.

Ms. Zhao Yongxia was arrested by Domestic Security Division head Li Lizhong on April 9, 2021, when she was talking to people about the persecution of Falun Gong in the Development Zone. Police ransacked her home and seized a notebook computer, Falun Gong books, and other items. She was taken to the Development Zone Police Department for interrogation, then to the Qinhuangdao Detention Center. She has been held there since.

Her attorney and a practitioner read her case in the Changli County Court on the afternoon of October 28. Judge Zhang Qiusheng called the Chengguan Police Station and had police arrest the practitioner.

Her trial is scheduled for November 16 in the Changli County Court.

Mr. Zhang Guanghe was harassed at home by two clerks from the Leyuanxi Residential Committee. They claimed the 610 Office ordered him to sign guarantee statements renouncing Falun Gong. If he did not sign, his and his wife’s pensions would be stopped and their daughter’s job would be in jeopardy. His family was stressed out. His wife and daughter asked him to give in.

The 610 Office had Mr. Ma Zhanquan’s deputy manager Li order him to sign three statements on October 27, 2021. He refused.

Ms. Gong Ruiping, a teacher in Pinggu District, was arrested on July 20, 2021. She is being held at the Shunyi Detention Center. Her case was submitted to the Pinggu District Procuratorate on October 22.

Ms. Tao Liyun was under surveillance for two weeks during the October 1 holiday season in 2021. She was followed whenever she left home.

Ms. Chen Jianying was arrested by officers from the Anci Domestic Security Division and the Xixiaoqu Police Station on October 27, 2021. The officers seized her Falun Gong books, a picture of Falun Gong’s founder, and other items.

Ms. Zhang Qiaolei of Tonghua County was secretly sentenced to five years in prison and taken to the Jilin Province Women’s Prison. Guards denied her family visits because she did not "transform."

Her sister, Ms. Zhang Qiaoxiu, and her daughter, Ms. Wang Meiqi, appealed to government departments for her release and sued agents who abused the law. They were arrested and are being held in the Tonghua City Detention Center. Their case was submitted to the Liuhe County Procuratorate on June 8, 2021, and then to the Liuhe County Court on July 5. The court did not disclose the name of the judge or any case information, and said it was “secret.”

Ms. Liu Lijie was arrested at home by officers from the Lashan Police Station at noon on October 27, 2021. The detention center did not admit her because her physical examination disqualified her. Instead of releasing her according to regulations, the officers repeatedly gave her physical examinations which detainees get in order to be admitted to a detention center. She was in police custody for over 24 hours.

Ms. Zhang Yi was dragged from her home into a police car by officers from the Ganquan Police Station on October 28, 2021. The officers forcibly collected blood samples and fingerprints from her in the police station.

Ms. Yang Xuehua talked to a young man about the persecution of Falun Gong on October 19, 2021. The man reported her to the police. She was arrested and held for five days in the Wenjiang District Detention Center.

Ms. Liu Zhonghua was arrested at home by officers from the Qingniwaqiao Police Station on June 2, 2021. She has since been held in the Yaojia Detention Center. The officers confiscated her Falun Gong books, paper currency with Falun Gong messages printed on them, pamphlets, and a printer.

Ms. Wang Limin’s daughter and son-in-law were repeatedly harassed by community clerks during November and December 2020. The clerks made harassing calls, threatened them, and deceived them. They tried to make Ms. Wang sign statements renouncing Falun Gong.

The daughter and son-in-law were harassed at home again by the community secretary and clerks in September 2021. On October 20, a group of people from the 610 Office, the Political and Legal Affairs Committee, the community, and the local police station went to see the leaders in her daughter’s work unit. She was forced to sign guarantee statements twice. The daughter and son-in-law were stressed-out.

Elderly Ms. Wang Renxiang was ordered to show her identity card by an officer when she was shopping in a farmers market on the morning of October 27, 2021. She said she did not bring it with her. The officer demanded her cell phone number. She replied that she did not have a cell phone. The officer tried to identify her using facial recognition. She did not comply. The officer grabbed her and photographed her.