(Minghui.org) Today's news from China includes incidents of persecution that took place in 7 cities or counties in 4 provinces, where at least 8 practitioners were recently persecuted for their belief. 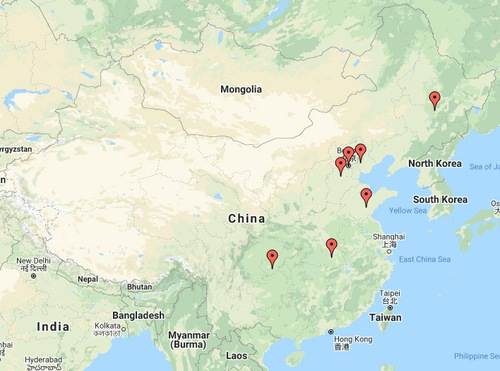 Ms. Zhang Fuming clarified the truth about Falun Gong and the persecution to Gao Qianyu at the Tongtaimen bus stop around 8 a.m. on November 13, 2020. Gao followed her, and officers from the Dongcheng Police Station later arrested Ms. Zhang and ransacked her home.

She was taken to the Jindudingyuan Brainwashing Center the following day. Thirteen days after she was arrested, Ms. Zhang was taken to the police station to record her statement. She was held there all day.

On the morning of November 25, Ms. Zhang was taken by officer Wang Min and a security guard for a nucleic acid test. After undergoing a physical examination, she was taken to the Jiangjin Detention Center by Wang Min, Wang Lirong (a female police officer), and a police assistant.

A hearing was held against Ms. Zhang for the first time on July 23, 2021. She was given a second hearing on August 8, and was sentenced to 10 months in prison and fined 1,000 yuan. She returned home after serving her sentence on September 22, 2021. Ms. Zhang has refused to write the three statements.

Miao Aidong, head of the Zunhua City Domestic Security Division, led domestic security officers and officers from the Xisanli Township Police Station to 59-year-old Ms. Wang Xiufeng’s home on October 15, 2021. The officers climbed over her wall, broke in, ransacked the place, and confiscated many personal belongings, including a printer and printing paper. Ms. Wang was arrested and is being held in the Tangshan Detention Center.

Ms. Wang’s non-practitioner husband and son were also taken away. Her husband was released that night, and their son was released on bail the following evening by officials from the village.

Mr. Jia Fengzhong from Zhaozhuangzi Village, Jianming Town, was arrested by officers from the Zunhua City Domestic Security Division and the Jianming Town Police Station on October 15, 2021. The officers ransacked his home and confiscated Falun Gong informational stickers and 200 to 300 yuan paper bills with Falun Gong information printed on them. Mr. Jia is currently being held in the police station.

Four people from the Sishilipu Town government and two from the Sishili Village Committee went to Ms. Wang Chunmei’s home at 9 a.m. on October 19, 2021. They pressured her to attend a three-day “study class,” and sign some paperwork, among other demands. Ms. Wang refused. Instead she compassionately clarified the truth to them, and advised them to act kindly. They left an hour later.

Four officers from the Lalin Police Department went to Ms. Tang Shuxian’s home on October 16, 2021. As soon as they entered her home, they started taking photos of her and demanded to know if she was still practiced Falun Gong.

Ms. Xu Lai, in her 70s, from Qiaokou District, was arrested near Wuhan City No. 4 Hospital while talking to people about Falun Gong on October 13, 2021. She was taken to the Etouwan Brainwashing Center.

Five officers from the Bailong Township Police Station broke into Ms. Tian Ling’s home and harassed her on October 19, 2021. They ransacked her home and confiscated all her 60 or so Falun Gong books, two printers, a laptop, over 30 desktop calendars, five boxes of earlier issues of Minghui Weekly, and five boxes of paper.

“Calling Out for Master at Critical Moments”