Home > Persecution > Accounts of Persecution
One Year After Husband Dies of Torture, Wife and Family Repeatedly Threatened for Their Faith in Falun Gong
Nov. 10, 2021 | By a Minghui correspondent in Sichuan Province, China

(Minghui.org) The authorities in Chengdu City, Sichuan Province repeatedly threatened local resident Ms. Yi Shuying and her family that her granddaughter would not be allowed to go to college because of her faith in Falun Gong, a spiritual discipline that has been persecuted by the Chinese communist regime since 1999.

Ms. Yi, 68, has been arrested multiple times and tortured in the past 22 years for upholding her faith. The latest harassment of her and her family happened in October 2021, only one year after her husband, Mr. Chen Huagui, passed away due to injuries from the police beating for his faith in Falun Gong.

Nine people, including officials from 610 Office in Wenjiang District and Hesheng Town, Wang Mingquan and Wang Fengqun, of the Yuhe Village committee, came to Ms. Yi’s home on October 14, 2021 and ordered her to sign a letter renouncing Falun Gong.

They threatened Ms. Yi’s son and daughter-in-law that their own daughter, who was in junior high school, would be denied admission to college in the future if Ms. Yi didn’t renounce Falun Gong. Ms. Yi refused to comply.

Since then, Wang Mingquan and Wang Fengqun have been calling Ms. Yi’s son and daughter-in-law every day to threaten them.

Husband Passes Away from Police Beating

Ms. Yi’s husband, Mr. Chen, was first arrested at home on June 28, 2000. The police confiscated his Falun Gong books and a photo of Falun Gong’s founder. After taking him to the local police station, the police beat him in order to find out where he got the photo of Falun Gong’s founder. When Mr. Chen refused to answer the question, one officer choked him until he passed out. Yet the officer continued to kick him. His clothes were stained with blood. The police forced him to wash his clothes to cover up the beating and slapped him in the face when he couldn’t wash off all the bloodstain.

Mr. Chen was arrested again on July 3, 2000 with Ms. Yi. Both of them were forced to kneel on the ground in the township government. One officer kicked him, slapped him in the face and handcuffed him. The handcuffs were so tight that his wrists bled. The officials ransacked the couple’s home, for the sixth time, after the beating.

Hu Dongxiang, the director of Hesheng Town 610 Office, led a group of officers to break into Mr. Chen’s home on the evening of December 31, 2001 and ransacked his home. They confiscated his ID and refused to return it.

After living a difficult life without an ID for three years, Mr. Chen found Hu to ask for his ID on October 5, 2004. Hu smashed Mr. Chen’s bike and beat him, injuring his right eye, mouth, and head. One of his lower incisors became loose and three front teeth fell out. Hu also hit Mr. Chen’s head with a wood chair more than ten times. Then another officer snatched Mr. Chen’s cellphone from behind and smashed it on the ground. Mr. Chen suffered severe injuries on his head and chest and was on the verge of death.

As Mr. Chen was preparing to file a complaint against Hu for beating him, Hu led a group of officers to arrest him again on October 19, 2014. While Mr. Chen wasn’t home when the police came, they arrested Ms. Yi and ransacked their home. They attempted to take Ms. Yi to the police station, but her family managed to stop them. 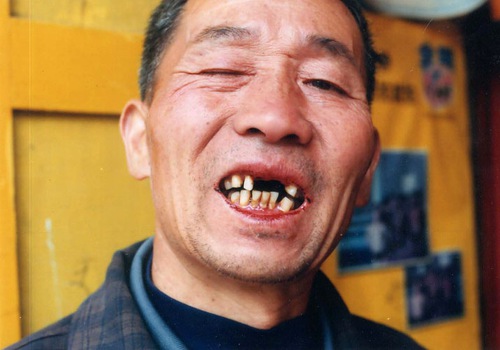 Mr. Chen suffered a recurrence of symptoms caused by his injuries in 2017, and was unable to recover. He passed away on October 2, 2020.

After the persecution of Falun Gong began in July 1999, Ms. Yi went to Beijing on the New Year’s Day of 2000 to seek justice for Falun Gong. She was arrested and escorted back. She was held for 45 days in Wenjiang Detention Center and fined 15,000 yuan.

Three officials from Hesheng town government, including Yang Biqin and Li Hongyuan, stormed into Ms. Yi’s home on March 30, 2000, and dragged her to the police station in handcuffs without an arrest warrant. Li Hongyuan pulled her handcuffs back and forth. The handcuff cut into her right wrist and caused it to bleed badly. She was locked in a small, smelly, dark room, without food all day.

Hesheng town officials detained more than a dozen other Falun Gong practitioners including Ms. Yi on April 29, 2000, for a so-called six-day “transformation study class.” The practitioners were ordered to write a letter of repentance, forced to stand under the hot sun for a long time, as well as being starved and verbally abused.

A few days after Ms. Yi was released, her home was ransacked with all valuable belongings confiscated.

Ms. Yi was arrested again with Mr. Chen on July 3, 2000. She was severely beaten with electrical cables and bamboo sticks on her feet, head, chest and back for more than three hours until she passed out. While beating her, the police also verbally abused her and pressured her to stop practicing Falun Gong.