He graduated from National Yangming Jiaotong University in Taiwan and then earned his Master’s degree in industrial engineering at the University of Southern California in 1994. He first learned about Falun Dafa in a flyer he picked up at a Chinese supermarket in 1997. This planted the seed for his journey of cultivation. 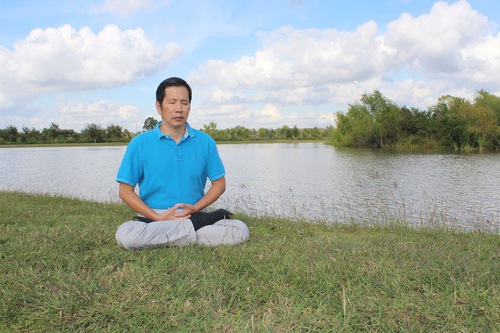 Guoxian does the fifth Falun Dafa exercise, the meditation. 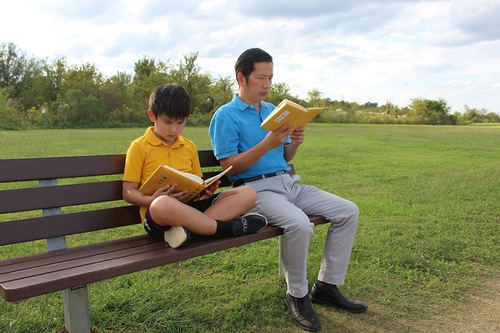 When Guoxian and his wife visited their family in Taiwan in 2000, a Falun Dafa experience sharing conference was being held in Taipei. More than 3,000 practitioners from 18 countries attended the conference from December 23-26. Many media in Taiwan reported on the event and how the CCP (Chinese Communist Party) was persecuting Falun Dafa practitioners in China.

Guoxian was amazed to learn that Falun Dafa was practiced in so many countries around the world. He thought it must be an extraordinary practice, so he was interested in learning it. On their way back to the US, Guoxian and his wife met two Falun Dafa practitioners on the same flight who told them where they could learn the exercises.

Before the persecution of Falun Dafa in China began in 1999, there were only a few hundred practitioners in Taiwan. After that, the number soared to over 50,000. Guoxian said, “I asked myself, ‘Why would the CCP attack and persecute such a peaceful group of people?’ It made me think, ‘Because the things that the CCP suppresses are usually good things.’

“I was in elementary school when Taiwan started a campaign to restore traditional Chinese culture in the late 1970s. I read the best literature from different dynasties in Chinese history. During the same period of time, I saw on TV how the CCP launched the Cultural Revolution. They destroyed temples, criticized Confucius, and promoted atheism. The sharp contrast between Taiwan and China gave me a clear understanding of the true nature of the CCP.”

As soon as Guoxian returned to Houston, he bought the book Zhuan Falun and read it. He also watched Master’s exercise-teaching videos online. A few months later, he started to participate in local Fa study and exercise sessions.

After cultivating himself, Guoxian became more tolerant and calm. He works hard at his job but doesn’t focus on his self-interest. One time, when a coworker in charge of factory operations had to travel for a week, several servers that controlled the factory workflow stopped functioning, which halted production in several factories. The coworker couldn’t return right away, and it wasn’t Guoxian’s area of expertise, but he decided to help out. In two days Guoxian was able to replace the faulty parts, restore the deleted information, and get the servers up and running again.

In his report to the administration, his manager praised Guoxian for his hard work and how he saved the company the loss of millions of dollars. The CEO of the company thanked Guoxian in person.

Guoxian said that Falun Dafa has shown him the true meaning of life and guided him to improve his character based on the principles of Truthfulness-Compassion-Forbearance. When he read Zhuan Falun, his body felt warm—as though it was being cleansed. Afterward, he felt full of energy. As he continued to study the teachings, he gained a deeper understanding of Truthfulness-Compassion-Forbearance. He used to be impatient with others when he thought he was right, but cultivation has made him more tolerant, and he now looks within himself first.

Guoxian said, “Falun Dafa taught me the essence of traditional culture, Truthfulness-Compassion-Forbearance. The purpose of cultivation is to return to our true origin.”

“Hunan Woman Sentenced to Second Term for Her Faith”

“Our Sincerity is Most Important When We Save People”