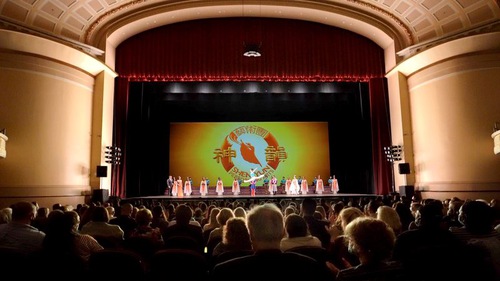 The Shen Yun Touring Company's curtain call at the Merrill Auditorium in Portland, Maine, on October 2, 2021. The company presented two performances in Portland on October 2–3, 2021. 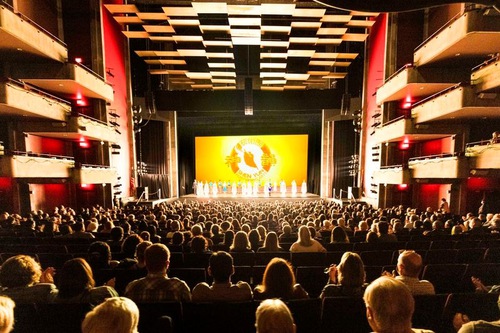 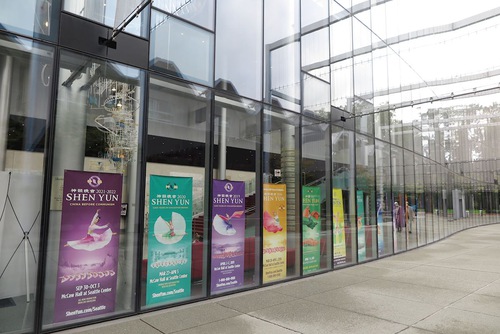 “A Picturesque Work of Art” 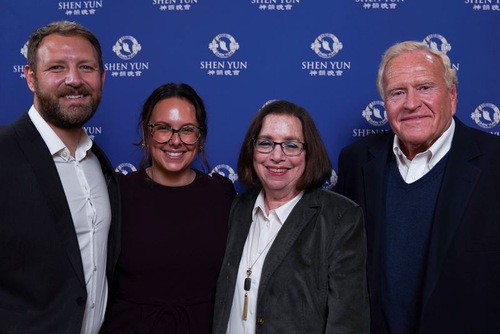 David Brandes (right), conductor and retired professor of music from Franklin Pierce University, with his wife Kathleen and other family members at the Shen Yun performance in Portland, Maine, on October 2, 2021.

David Brandes, a conductor and retired professor of music from Franklin Pierce University, saw Shen Yun with his wife Kathleen and two other family members in Portland, Maine, on October 2, 2021.

“This was fantastic. It was a wonderful experience. I was so impressed with the music, the dance, the technology, the scenery. It was very very deeply moving,” Mr. Brandes said.

“It's just beautifully done. It's a picturesque work of art,” he said.

“You know the combination of art forms has always been one of the most outstanding, extravagant, but difficult things to do. When you start putting the art forms together, independently, they each have their own significance. They each have their own interpretation, value. They each speak to us in a different way. But when you put them together in this kind of a format, it's just spectacular. It's just wonderful,” he said.

“Very strong spiritual movement... That's an element that you don't see in a lot of performances. But I got a sense that this was a very deep spiritual expression by [these] dancers and the people who are doing it. They clearly love what they're doing. They clearly believe in what they're doing. So the spirituality of it comes through in a very very strong way,” Mr. Brandes said.

“I think I have a much greater appreciation for the Chinese culture... Particularly the interpretation of the Chinese culture, the history, came through beautifully in the performance. And here you are, really watching something without words, but you know that art speak to us in ways that words can't speak to us... So I came away full of emotion and appreciation,” he added.

Mrs. Brandes also shared her thoughts. “The music is healing... When they said that in ancient Chinese times, music was used to heal, I think that's true even today. You can feel it when you're in a place where fine music is being played. It just fills your soul and you heal. You're better,” she said.

She also felt in the show, “God in whatever form or way it takes, that's what we are. You know, children of the great one thing. So that's what I took from it.

“Thank you, from my whole family. It was really really wonderful,” she said. 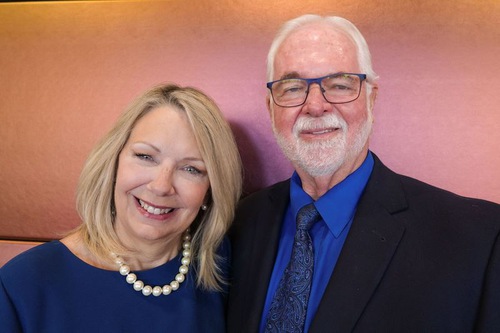 Lynwood Councillor Jim Smith and his wife Sherry saw Shen Yun at the Marion Oliver Hall in Seattle on October 2, 2021.

“[It] has you on your seat from the very beginning,” Councillor Smith said. He is also the owner of an entertainment corporation, and sings and plays the guitar.

“This is much better than [I could have] ever expected,” he continued, explaining that he has been involved in the entertainment industry for decades and was overwhelmed by the performance. “It is beyond excellence.”

Mrs. Smith said she was mesmerized by New York-based Shen Yun. “[The] costumes are just amazing... The music is wonderful, the storytelling, we can understand the story. [It] is just fabulous,” she said.

“It’s so uplifting,” she said, “And it’s so nice to see people again out and enjoying [Shen Yun].”

She was particularly impressed by the dancers. “Just the way they move, the way they flow through the stage—it doesn’t look like they’re... even trying,” she added.

Mr. Smith enjoyed the variety in Shen Yun's performance and its presentation of the different geographic regions of China. Shen Yun portrays an authentic picture of China as well as the “hearts of the people of China,” he said.

“[It] is a culture that must be revived and I am so grateful to know that is what’s being done here. We wish our grandchildren were here to see this. As much as I think that I know what’s going on in the world, it is a surprise to me that just tonight, I’m learning about how this [traditional culture] is suppressed so much in China,” he said.

He is currently taking part in a mayoral contest and said that Shen Yun has also given him new insight and a deeper understanding of China that will be helpful in his campaign.

“I think that [Shen Yun] wakens you up and shows that there’s not only a wonderful path in China, but it’s a beautiful future for everyone throughout the world,” he said.

“I see nothing but positivity [in Shen Yun]. There’s so much that we’re learning... It's... enlightening.

“I want to be able to say ‘Yes, there’s not only hope but there’s a bright future ahead.’ Whether it be myself, my family, people from other countries, we can all come together because we are all in this together,” Mr. Smith said. 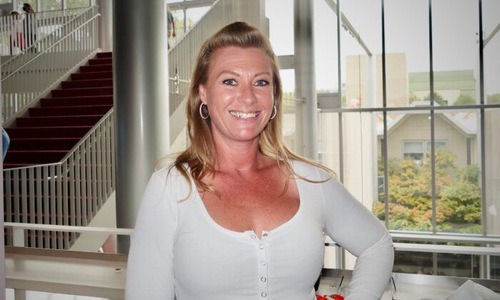 “I’m absolutely loving it... The costumes are colorful and very detailed. The way that they complement all of the dancers’ movements is just impeccable,” she said.

“I’m loving the music—there’s nothing like watching a show with a live orchestra. It makes such a difference, in the audience’s perspective,” she added.

At her dance center, Ms. Brumley teaches children jazz, tap, ballet, and hip hop. As a result, she was keenly interested in the different techniques and styles used by Shen Yun’s dancers.

“I’m really enjoying seeing the differences but also seeing the similarities because dance crosses over that way,” she said.

She also spoke about Shen Yun’s mission of bringing to life “China before communism” and presenting the authentic history of the Chinese people.

“It looks like a very beautiful, hopeful, positive place [and] I’d like for it to be that way for that community again because it looks like a paradise. I’m very much enjoying learning the cultural side and enjoying the dance too,” Ms. Brumley said.

“I think being here, and seeing [the performers’] love and their happiness, makes everyone leave the theater today feeling positive, and that they came and saw something beautiful and supported something that they want to keep going,” she said.

Ms. Brumley said she would recommend the performance to her family and friends, giving Shen Yun a “ten out of ten.” 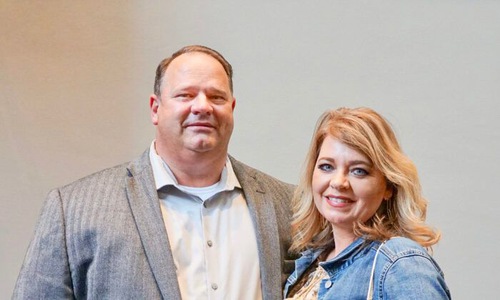 “It is beautiful to see the culture is still alive, even though it is in America and perhaps it could be seeds of a revival in China,” Mr. Williams said.

“I just imagine how difficult it must be in China for the people to live the dreams that they have, it must be difficult,” he said.

Ms. Williams was inspired by the rapid growth of Shen Yun and the importance of their mission.

“I feel the freedoms we have we take for granted, where[as] they don’t. So being able to have a land of opportunity here in America, and that they have expanded from one to seven tours, that’s amazing... That’s how it’s supposed to be,” she said.

“It’s interesting to see that, no matter what culture you have, no matter where you are in the world, you have a desire to understand a higher being and understand God in your understanding of it.

“Whether you believe or not, it’s good to see what people do believe because it is within man to have a spiritual understanding of things,” he said.

Ms. Williams agreed. “All of us are spiritual beings and I feel everybody is searching for that. And something higher than yourself is important and I think this is what will help people understand that.” 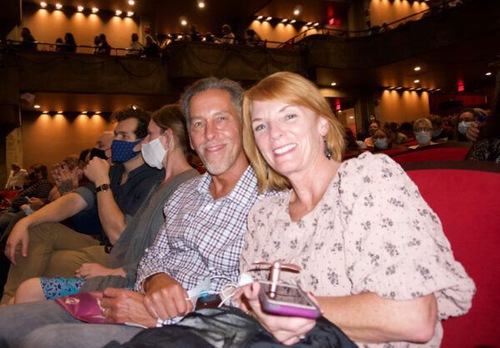 Dennis and Elieen Robleski enjoyed an evening at Shen Yun's performance in Indianapolis, Indiana, on October 2, 2021.

Dennis Robleski, an adjunct professor and retired banker, saw Shen Yun with his wife Elieen in Indianapolis, Indiana, on October 2, 2021.

“It’s a part of Chinese culture that I really hadn’t ever had any exposure to before,” Mrs. Robleski said. “When you think of communism here in the States, we think of oppression and repression... In my lifetime, China has always been communist, so to see what was there before is at the same time wonderful and sad.”

Mr. Robleski spoke of the different cultures that exist within China.

“I think we tend to think of communism as trying to force uniformity, and China is such a massive land and so diverse from so many aspects,” he said. “This is really showing its diversity through the dance.”

“Believing in Falun Dafa and Experiencing Its Power”