(Minghui.org) Falun Dafa practitioners held a rally in Philadelphia’s Chinatown on September 26 to support those who’ve quit the Chinese Communist Party’s (CCP) organizations. Mary Isaacson, a member of the Pennsylvania House of Representatives, initiated a citation to the Greater Philadelphia Falun Dafa Association to express support for the 382 million Chinese who have quit the CCP and its affiliated organizations. 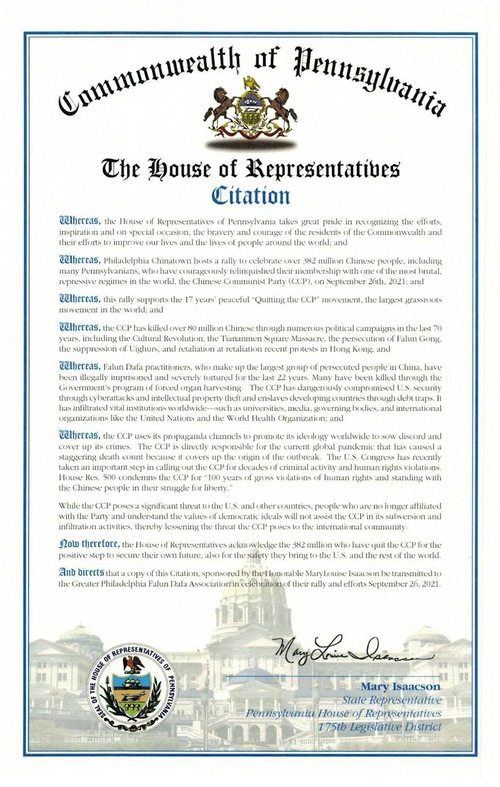 Citation from the Pennsylvania House of Representatives

“Whereas, Philadelphia Chinatown hosts a rally to celebrate over 382 million Chinese people, including many Pennsylvanians, who have courageously relinquished their membership with one of the most brutal, repressive regimes in the world, the Chinese Communist Party (CCP), on September 26th, 2021; and

“Whereas, this rally supports the 17 years peaceful ‘Quitting the CCP’ movement, the largest grassroots movement in the world; and

“Whereas, the CCP has killed over 80 million Chinese through numerous political campaigns in the last 70 years, including the Cultural Revolution, the Tiananmen Square Massacre, the persecution of Falun Gong, the suppression of Uighurs, and retaliation at recent protests in Hong Kong; and

“Whereas, Falun Gong practitioners, who make up the largest group of persecuted people in China, have been illegally imprisoned and severely tortured for the last 22 years. Many have been killed through the Government's program of forced organ harvesting. The CCP has dangerously compromised U.S. security through cyberattacks and intellectual property theft and enslaves developing countries through debt traps. It has infiltrated vital institutions worldwide—such as universities, media, governing bodies, and international organizations like the United Nations and the World Health Organization; and

“Whereas, the CCP uses its propaganda channels to promote its ideology worldwide to sow discord and cover up its crimes. The CCP is directly responsible for the current global pandemic that has caused a staggering death count because it covers up the origin of the outbreak. The U.S. Congress has recently taken an important step in calling out the CCP for decades of criminal activity and human rights violations. House Res. 500 condemns the CCP for ‘100 years of gross violations of human rights and standing with the Chinese people in their struggle for liberty.’”

“After Serving 11 Years, Jiangxi Man Sentenced Again for His Faith”